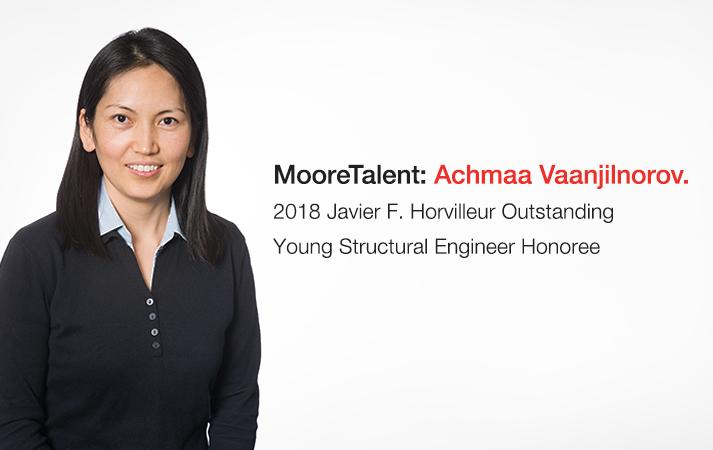 Walter P Moore proudly announces that Achmaa Vaanjilnorov has been named the 2018 recipient of the Javier F. Horvilleur Outstanding Young Structural Engineer Award. The Horvilleur Award is presented annually to one young structural engineer at the firm who has best exemplified excellence in technical design, client service, and business acumen. The award is named for and is in appreciative memory of Javier F. Horvilleur, P.E. (1954-2002), who was an inspirational leader-engineer at the firm for over two decades.

Achmaa was nominated by Walter P Moore’s Brent Bandy, a Principal and Senior Project Manager within the firm’s Structures Group in their Atlanta, Georgia office. Brent praised her for her creativity, resourcefulness, shared sense of urgency, and positive attitude. “We count on her, and clients love her,” Bandy enthused. “She consistently goes the extra mile.” 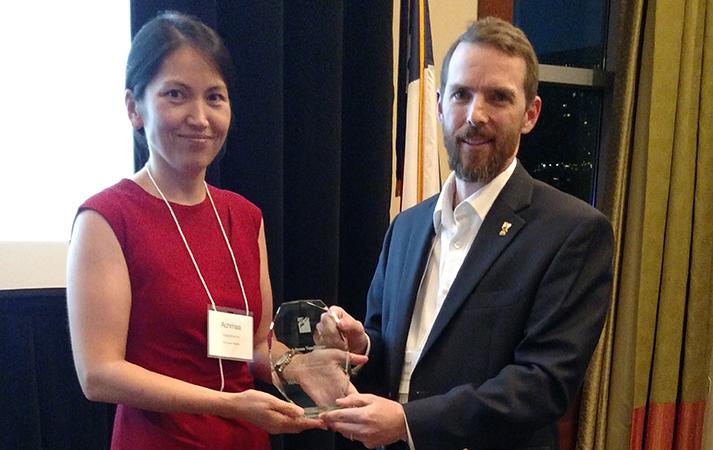 Achmaa was selected on the basis of extraordinary client service (having received several positive reviews from clients via the firm's client feedback tool), excellent quality of work, and business acumen/management skills. She unflinchingly taught herself several digital tools during peak production times, is proactive and very efficient in managing multiple projects and deadlines, and has become a trusted advisor both to clients and internally among her peers as well.

Additionally, because of her work on numerous healthcare projects, Achmaa has become a valued member of the firm's Healthcare Community of Practice (HCoP), authoring a wiki page on the design and construction of rooftop helipads. Along with her own experience with the design, construction, and cost aspects of rooftop helipads, she incorporated lessons learned from others in the HCoP.

An associate and graduate structural engineer in Walter P Moore’s Atlanta office, Achmaa joined the firm in 2014. She is the 16th recipient of the esteemed Horvilleur Award.

Fun fact about Achmaa: Achmaa completed her engineering education in a non-traditional fashion. After immigrating with her family to the U.S. from their native Mongolia when she was 17, she gained practical experience as a home builder and taught herself English. She later attended a local community college before earning her Master of Science in Civil Engineering from Virginia Tech.