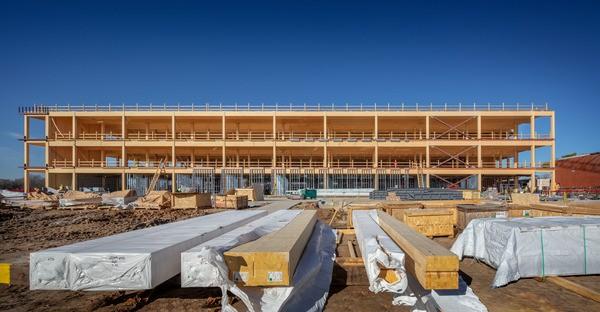 In recent years, mass timber has appeared as a credible market competitor to steel and concrete even in areas without local forests. In the initial phases, promotors of mass timber imagined mass timber buildings as a key component of an effort to reduce embodied carbon. As more industry experts have congregated around the subject of sustainability to think through the data and details, the value of mass timber has come into better focus.

What industry experts—owners, engineers, and architects—have simultaneously come to accept is that there is no singular solution to the problem of carbon emissions from the building industry. The new Classroom Building at San Jacinto Community College Central Campus is a structure that highlights the current state of carbon reduction best practices, where the decision to use mass timber to reduce carbon emissions is part of a multi-faceted approach.

As is common with most building projects, the Classroom Building was conceptualized under the pressure of ordinary economic and budgetary constraints. That mass timber could survive the vetting of market logic is a testament to where the industry is today. The college’s Capital Improvement Program was in its sixth year, needing more than ever before to limit expenditures and accelerate construction schedules. At the time, college leaders saw steel prices trending a volatile path upward and lumber prices following a steadier downward trend. That was in 2019, and without an inkling of how the next few years would play out, a mass timber building was born.

Most of the project design and construction partners had a steep learning curve with a relatively new building material to the Houston area. The most valuable expenditure of early efforts was to rely heavily on industry experts. Case in point, the project contractor, Tellepsen Builders, organized a two-day, in-person interview session where four short-listed mass timber providers were probed for their expertise and abilities. At the end of the sessions, the entire team including San Jacinto Community College, the contractor Tellepsen Builder, the architect Kirksey Architecture, and myself representing Walter P Moore as the structural engineer of record on the project, voted on which company to select as the mass timber provider.

In retrospect, issues that were important for other reasons proved to be impactful to the project’s carbon footprint. For example, the ideal suppliers were those who managed their own forest land. Controlling the source and manufacturing of mass timber products allows companies such as Nordic Structures to supply the public with detailed information not only about carbon emissions, but also other measures of air and water pollution.

As the first step in reducing your environmental footprint is measuring where you currently are, Walter P Moore completed a LCA of just the building structure using Tally, a Revit plug in, to help understand where the embodied carbon was in the building materials. A comparison of the building with a baseline building constructed of steel framing members and composite metal deck slabs posits that the mass timber structure results in a cradle-to-grave global warming potential reduction of 75%, using Tally and inclusive of biogenic carbon.

When the contracts were signed for the material, the construction team favored delivery by rail because of the logistical benefits. However, rail transport also significantly reduced the carbon footprint of the mass timber package when compared to delivery by truck. What is relevant to note is that the decision to use mass timber, to choose a supplier that maintained their own forests and could deliver by rail were decisions based upon risk attenuation regarding cost and schedule, concurrent to the substantial impact to the project’s embodied carbon.

The multi-faceted approach taken on the San Jacinto Classroom project includes not only the front-end impact of a mass timber structural frame but also a host of energy saving measures. The cross laminated timber (CLT) roof was designed to support 21,000 sf of solar panels. The CLT roof panels were also shop fabricated to house solar tube lighting throughout the hallways. The building’s curtainwall system utilizes an electrochromic glazing system, and a rainwater harvesting scheme is being worked out to provide water for the campus cooling plant.

The mass timber structure for the San Jacinto Classroom helps establish low embodied carbon for the building, and the additional design enhancements ensure that its operational impact to the environment will be attenuated over its lifespan.