After the Quake: An Engineer's Journey Aiding Nepal's Post-Earthquake Recovery

After the Quake: An Engineer's Journey Aiding Nepal's Post-Earthquake Recovery 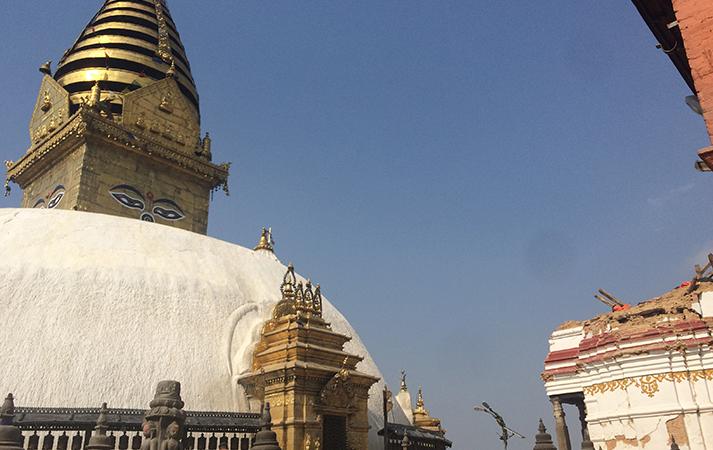 Nepal experienced its worst disaster in more than 80 years on April 25, 2015 — a magnitude 7.8 earthquake with an epicenter in Gorkha (approximately 50 miles NW of Kathmandu), and then a magnitude 7.3 aftershock on May 12, with an epicenter near Kodari (approximately 50 miles NE of Kathmandu). These combined earthquakes killed more than 8,800 people, injured 23,000 more, and caused untold amounts of damage to houses, businesses, and historic sites.

Here, Laura takes us along on her 10-day deployment of assessing structural damage and training younger Nepali engineers, giving us a glimpse into the early stages of post-quake recovery efforts. You can also see a slide show of Laura's journey on SlideShare.

My journey to Nepal to assess post-earthquake damage of buildings began by responding on May 25 to a call put out by ASCE-SEI from INCLUDED, an NGO (non-governmental organization) working in lower income and migrant communities. I departed on Wednesday, June 3, and after an excruciatingly long flight to Abu Dhabi (15 hours) and a comparatively short flight to Kathmandu (4 ½ hours), I arrived in Nepal on Thursday night. Driving to the hotel, even though it was night, it was clear that there was extensive damage to brick buildings.

The next 8 days were filled with assessments, training sessions, and collaboration. I met with representatives from a Nepali engineering firms, UN Habitat, the Earthquake Engineering Research Institute (EERI), Build Change, Shelter Cluster, and the Federation of Nepali Chambers of Commerce and Industry (FNCCI). I provided informal, on-the-job training to younger engineers in assessment techniques, as well as giving an hour-long talk to engineers, architects, and building marketing professionals at the FNCCI. However, most of what I was doing was assessing the safety of buildings and making recommendations to the owners and occupants. I was not deputized by any jurisdiction, so I didn’t have the authority to tag buildings or make legally binding declarations.

A few highs (and lows) from the trip
We went to the outskirts of Kathmandu (KTM) to visit a Hindu temple whose residence house was damaged in the quake. We broke out the Schmidt hammer, a tool that’s used to approximate the compressive strength of concrete, to test the strength of the damaged columns. The reading was extremely low, and combined with the damage we saw to the columns, we recommended a retrofit such as jacketing. I was informed that traditionally, you’re supposed to eat after visiting a temple, so I happily accepted a plate of spicy vegetable momos, which are Nepali dumplings.

We visited a garment factory where 21 out of 22 columns had buckled. The owner wanted to know if he could save the building. I told him it was theoretically possible, but would involve lifting the building on hydraulic jacks, so it was probably cost prohibitive. He didn’t appreciate that assessment and told us that he was going forward with his plan to just add unreinforced brick walls in between the columns, which would provide virtually zero resistance to an earthquake. In fact, while we were at the facility, there was a mason already laying bricks.

Afterward, Bipin (an engineer from one of the Nepal firms) told me that the owner has no incentive to dismantle the building and rebuild properly because labor is so cheap in Nepal that if it falls down in the next earthquake, he’ll just rebuild it then. In the meantime, he’ll have been able to use the building to produce garments. The workers in this factory also live in the upper stories, so their exposure to this extremely dangerous building is 100%. I was deeply saddened by this reality and the helplessness of being unable to do anything about it.

I was introduced to a young Guthi volunteer, Bimala, who wanted me to come look at her family’s house. They were a family of about 20 who had been sleeping on the floor of their shop since the earthquake because they were too afraid of their house. When I looked at their house, I could see that it was only cosmetic damage to the plaster. I did see some potential design issues (discontinuous columns) but was able to verify through the use of quick sketches and talking with the owner through Bimala’s translation that the columns were in fact continuous, just buried in walls. I assured them that the building was not damaged and they were ecstatic. For the rest of the afternoon, every ten minutes or so, Bimala would exclaim, “I can sleep in my bed tonight!” That sort of interaction is what reminded me that even though our efforts often seemed futile, we were still able to make a difference for some people.

Conclusion
I can say without hesitation that the trip was worthwhile. There were small frustrations, but overall I learned a lot about unreinforced masonry and concrete frame performance in earthquakes, and I think I was able to help in some small way. I hope that the issues I raised in my talk might inspire some discussion among Nepali engineers, primarily the fact that I was sensing a fair amount of duplication of effort. At several buildings, I would tell the owner my recommendations for the building and the owner would say, “Oh yeah, the other engineer said that too.” There was no indication whether someone had already looked at a building (I only saw three building tags the whole time I was there), and there was no documentation of the recommendations that was I making (or that anyone had made before me). I was keeping records for myself, but no one else seemed to be interested in copies. I have a feeling that my recommendations to building owners became a little lost in translation, both from English to Nepali and also engineering-ese to lay-speak, although I tried to simplify everything.

I think the most effective efforts were when I could tell people their building was undamaged and assuage fear. I also tried to spread the message that earthquakes could not be predicted by anyone, and that you shouldn’t just add unpermitted stories on top of your building willy-nilly (this was alarmingly common).

Kathmandu was far enough away from the epicenters that there wasn’t total devastation, but I still couldn’t drive more than 5 minutes without seeing a collapsed building, and almost every building had at least a little damage. It was a little exhausting to be constantly surveying the damage, even off the clock, and it was extremely depressing to see all the different places where people were forced to sleep (parks, the grounds of government buildings, golf courses, sidewalks, river banks, the no-man’s-land in the middle of an intersection).

Overall, Nepal was very welcoming — the people were warm and polite, the food was delicious, and I’m happy to report that most of the tourist destinations are open and ready for visitors. Their best hope for recovery is by restarting their tourism industry, as much of their economy depends on visitors, so if you’ve ever wanted to see the Himalayas or the birthplace of the Buddha, or ride an elephant or pet a yak, hop on a plane to Nepal!

This marks Laura's second deployment for post-earthquake assessments. Read about her previous experience in Napa and Vallejo after California's 2014 quakes.