After the Quake: Walter P Moore helps California Get Back in Business

After the Quake: Walter P Moore helps California Get Back in Business 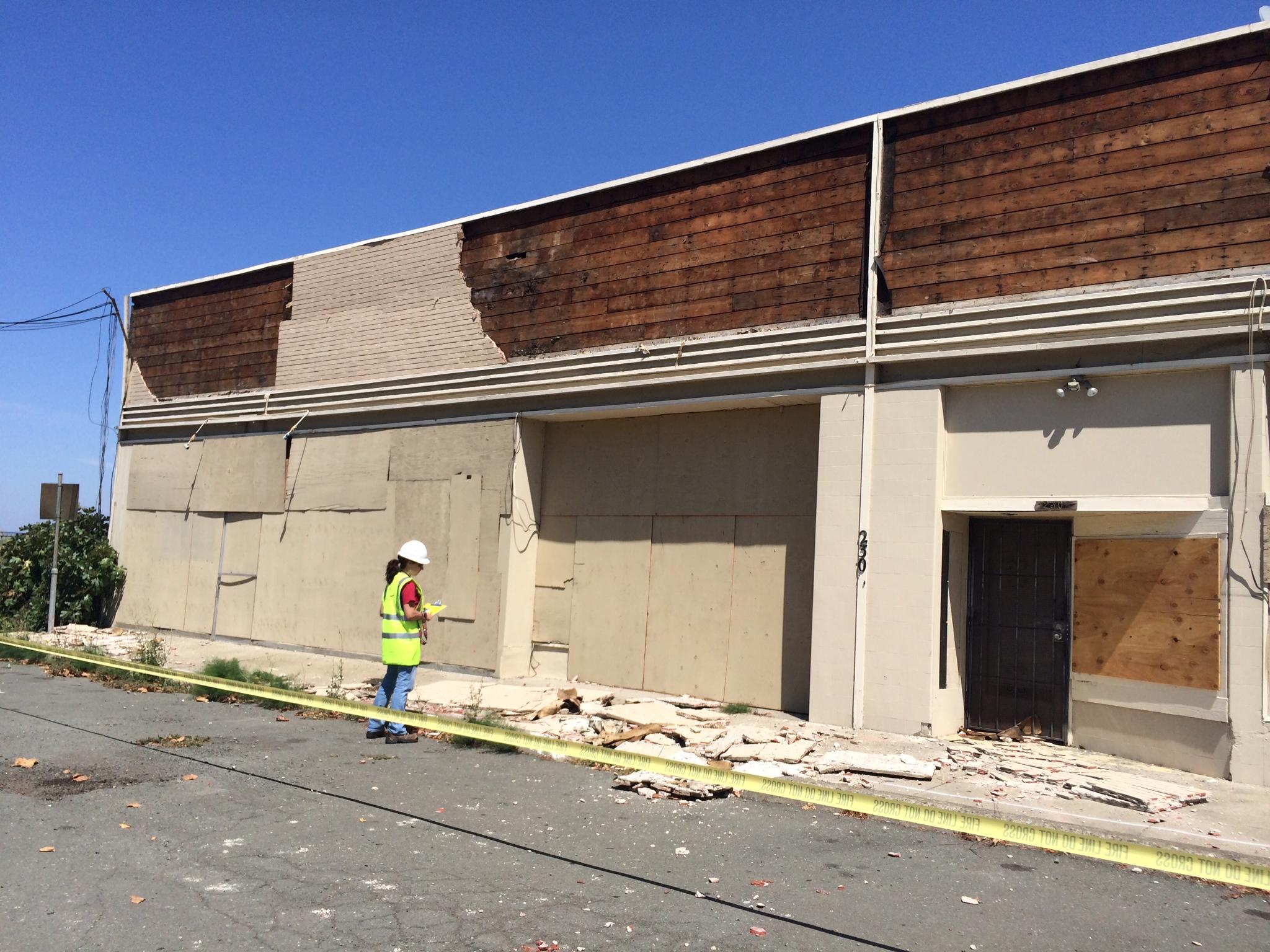 Walter P Moore’s Laura Whitehurst was deployed for earthquake damage assessment in Napa and Vallejo, California, just 2 days following the area’s worst earthquake since 1989. Here, Laura takes us along on her 4-day deployment, giving us a glimpse into the early stages of the post-quake recovery effort.

URM = Unreinforced Masonry buildings. A type of archaic building construction (no longer permitted) which has shown to be very vulnerable to damage and life safety in earthquakes. In large California cities, such as SF, Oakland, and LA, jurisdictions adopted mandatory seismic strengthening and most of those buildings have been strengthened to at least some minimum standard. However, many other cities, such as Napa, have not enacted mandatory seismic strengthening ordinances for their URM buildings and as a result, substantial risks remain.

Yellow Tag = “RESTRICTED USE” Entry or occupancy is restricted to parameters defined by the Inspector, based on the damage observed.

Just a quick update from the field. I was out walking around Vallejo all day tagging buildings. There were 17 of us deputized by the city (a mix of engineers, architects, and building inspectors), broken up into teams of 2, each assigned to a zone to evaluate all the buildings within. I was working with a DSA inspector tagging mostly residential buildings — some single-family and some apartment buildings (mix of wood frame, masonry, concrete, and a bit of steel). We had to tag two buildings red, and it was totally heartrending to tell the tenants they had to leave and couldn’t come home for an indefinite period of time. They don’t really talk about that in SAP training.

Tomorrow, it’s more of the same. We have to finish our territory, but we also keep getting dispatched to other areas here and there as the city determines is needed, so it’s been a bit frenetic. There’s some pretty serious URM damage on Mare Island, as well as a few other isolated areas (one big church lost its tower, most notably).

So far, the biggest danger I’ve faced is blackberry bushes. I hope to keep it that way.

SAP Day 2 [8/27/14]
Hazard of the day: “…being yelled at by a man who, once he realized he wasn’t going to stop us from yellow-tagging his house, started accusing me of spying on him while he was naked.”

I drove up to Napa after I finished in Vallejo for the day and walked around the downtown area to get more photos of the damage. Lots of looky-loos hanging around downtown Napa.

Today the most exciting thing that happened was being yelled at by a man who, once he realized he wasn’t going to stop us from tagging his house yellow, started accusing me of spying on him while he was naked. That was a fun one to write up.

Today we mostly tagged chimneys, although I was sent back to check on an unstable wall supporting gas meters we’d yellow-tagged yesterday. They’d braced it so we told PG&E they could turn the gas back on. We had to red-tag two structures — one house with noticeable racking of its support posts (see photo of the crawl space), and the other an abandoned set of stores with cladding damage and loose electrical wires hanging off the building. See the photo of two surgeons in full operating gear talking to my teammate Kathy. They were concerned about their medical building next door.

SAP Day 4 [8/29/14]
Hazard of the day: “The very convincing, yet bluffing (although we didn’t know it until later) homeowner who insisted his home was not unsafe and threatened to go get his shotgun if we tagged his home.”

Today we started by visiting a couple of houses whose owners were concerned about their chimneys and had called the building department for inspection. When we get called out to a specific address, we usually end up spotting 4 or 5 more houses in the area with similar damage that we also need to tag, so it takes us a long time to get through each line item on our list.

The San Francisco Public Utilities Commission has lent their support by sending 3 iPads with special apps preloaded that allow us to take pictures and geotag them with the information about the building tags. That has saved the people documenting all the tags a lot of work on the back end. This was Day 2 of the iPads, and we’ve all gotten a lot faster at using them in teams (one person fills out a tag, the other person logs it on the iPad and takes photos). Toward the end of the day, our reinforcements showed up for all of us who had been on the job since Tuesday. We helped bring them up to speed on our processes and the idiosyncrasies of Vallejo (only 2-way stops!?).

My time in Vallejo is over now, as I write from the comfort of my own living room. I’m not sure “enjoyed” would be the best way to describe my experience; it was hard work, and the circumstances that led to it were unfortunate. I can say with certainty, however, that I learned a lot about building construction and behavior in earthquakes, and I also have a list of things I would bring with me next time. It’s a little frustrating that I’m leaving just as I was really getting efficient at tagging buildings, know the street grid of Vallejo, and have the building department’s phone number memorized. I hope we don’t have a need for earthquake damage inspectors again anytime soon, but if we do, I’m ready to go.

I’ve talked a bit about people who were very resistant to our presence, but they were a tiny minority of the people we met on the job. Most of the people were very happy to see us out looking at their buildings. Many asked us into their homes to look at further damage (most was cosmetic cracking of drywall or stucco). One extremely nice man gave my teammate and me tall glasses of ice water on a very hot afternoon. The manager of a yacht club offered my partner and me free drinks (sorry, on the job…).

Neighbors would come out of their houses when they saw us tagging an adjacent house and kindly ask us to look at their house next. Many people came up to us on the street and in restaurants to thank us for the work we were doing. Overall, the city of Vallejo was very welcoming of us, and I was very impressed by their community.