Celebrating the Women Behind the Design of Protective Stadium

Celebrating the Women Behind the Design of Protective Stadium 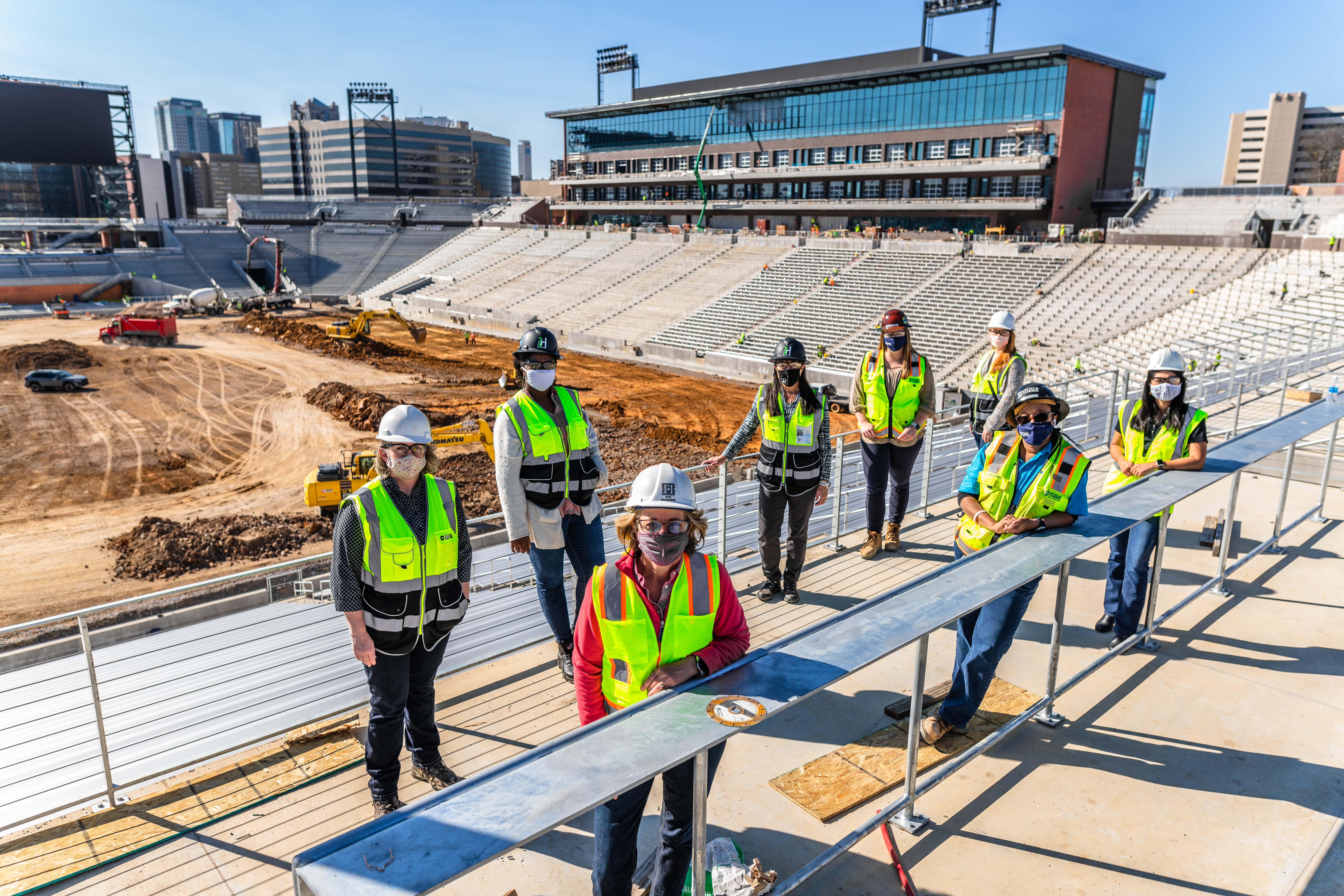 According to the National Association of Women in Construction (NAWIC), the focus of Women in Construction Week is to highlight women as a viable ovided structural engineering services for Protective Stadium. As the Project Manager for Protective Stadium, Principal Shruti Sharma led all aspects of structural engineering such as conceptualizing the design solution, comparative analysis of structural systems, pricing the schematic design options, parametric modeling of structure, detailing the connections, outlining staged construction analysis, and coordinating with architecture as well as other disciplines.

(Birmingham, AL) — Construction on Protective Stadium is progressing on schedule, slated for completion in time for the University of Alabama at Birmingham’s (UAB) fall 2021 football season. With oversight by the Birmingham-Jefferson Convention Complex (BJCC), this highly complex construction project calls on the expertise of architects, engineers, designers, project managers, suppliers, and trade professionals of many disciplines. As the construction industry marks Women in Construction Week March 7th through 13th, the BJCC spotlights the women working on the Protective Stadium project.

“Across the projects underway at the BJCC right now, including the construction of Protective Stadium and the renovation and expansion of Legacy Arena, our collective team has some of the greatest talent in the industry, many of whom are women,” said Shelia Montgomery-Mills, BJCC Sr. Project Manager of Design & Construction. “It has been inspiring to see more and more women in the industry within the design professions and in the various trades. The biggest change I have seen in the past few years is the increase of women in hardhats actually performing a wide variety of trades. It is great to be a part of projects that open up opportunities for these women that are breaking barriers one day at a time.” 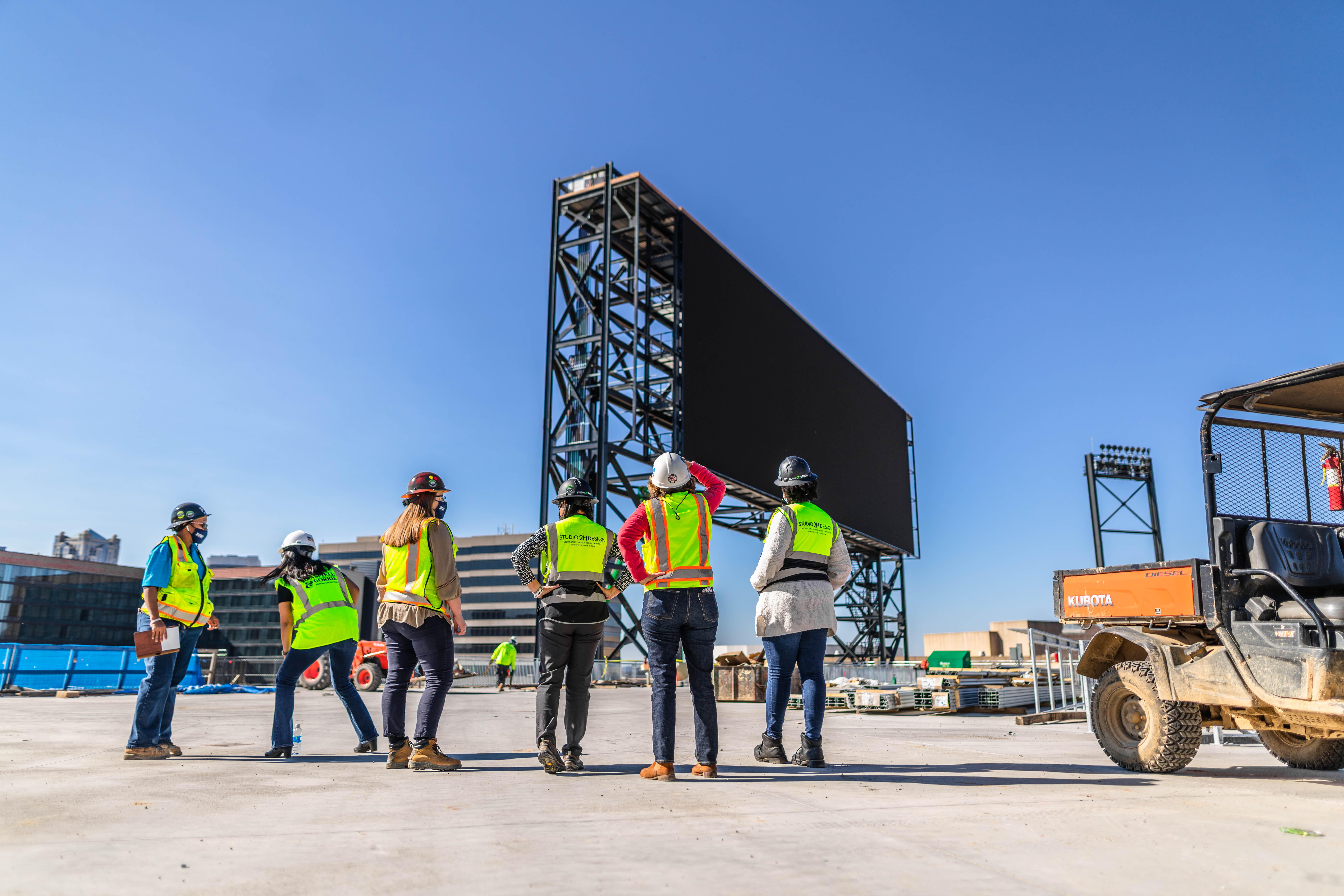 Other women at work on the project are from Studio 2H Design, a Birmingham-based minority and female-owned business responsible for designing Protective Stadium’s concourse-level low rise buildings. Macknally Land Design, a Birmingham-based, female-owned landscape architecture firm, collaborated with the project architect, Populous, to realize the vision for the environment immediately surrounding the stadium structure. Birmingham-based, woman-owned Hyde Engineering is an electrical engineer on the project. Shruti Sharma, a principal with Walter P Moore, is the structural engineering Project Manager. Trades with strong female representation include electrical, welding, masonry, HVAC and more, with dozens of women contributing to the stadium’s construction.

“It’s empowering to look around and see so many women in every aspect of this project,” said Brasfield & Gorrie Project Manager Virnetta Woodbury, who is a NAWIC Greater Birmingham board member and past president. As a project manager, Woodbury contributes to the project’s planning and management and coordinates with trade contractors. “Having that kind of representation throughout so many skill sets is rare, but we’re seeing that more and more.”

“Studio 2H Design is proud to have a very skilled and diverse group of designers. Our female-led Protective Stadium team is happy to use our talents and education to have a positive impact on our home city as it continues to grow,” said Nolanda Hatcher, owner and architect at Studio 2H Design. “Allowing each of our team members to have meaningful responsibility gives us all a sense of pride and ownership in our work. We are grateful for this opportunity and excited to continue contributing to such important community assets.”

Studio 2H Design’s project team includes Hatcher as Principal-in-Charge, Angela Nash as Project Architect, and Kayla Bailey as Project Coordinator. Nash’s experience with the BJCC goes back to the 1990s when she served on the project team for the BJCC expansion. The same team is also hard at work on the Legacy Arena renovation, which is scheduled for completion in Fall 2021.

“There is a wealth of talent to draw on in these industries, in our region,” said Lea Ann Macknally, president, Macknally Land Design. ”It’s a point of pride to be on a team along with incredibly talented women who’ve established reputations at the tops of their fields. We’ve worked together, but most of us have served together on boards and committees, many of those dedicated to instilling values in the future professionals of our field.”

“I’m encouraged to see women stepping into the AEC (architecture, engineering and construction) industry, but it is still rare to find female engineers or architects, especially in a leadership role on a sports facility construction project. For the Protective Stadium project, I was delighted to find that women were actively involved in and passionately contributing toward the construction of this iconic project across all the disciplines,” said Shruti Sharma, Principal and Project Manager, Walter P Moore.

As Walter P Moore’s Project Manager for Protective Stadium, Sharma led all aspects of structural engineering such as conceptualizing the design solution, comparative analysis of structural systems, pricing the schematic design options, modeling of the structure, outlining staged construction analysis, collaborating with Populous architects to showcase visually exposed steel to celebrate Birmingham’s roots in the iron industry, and coordinating with BJCC as well as other disciplines. Sharma is known for her work on sports stadia, including Globe Life Field, PNC Stadium in Houston, Lucas Oil Stadium, and Daytona International Speedway, among others.

“The level of talent working on the BJCC’s construction projects is remarkable,” said Tad Snider, Executive Director and CEO, BJCC Authority. “These collaborative teams are bringing their best ideas and most relevant experience to produce a stadium and an arena that will serve our region well for decades. We have NAWIC leadership and members among these teams, and we’re pleased to spotlight their contributions to these projects and to their professions.”