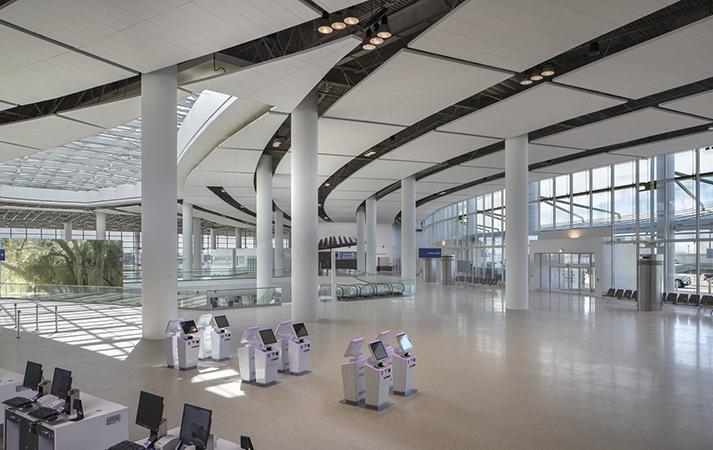 The new North Terminal at Louis Armstrong New Orleans International Airport (MSY) opened today with a boisterous fanfare of a live jazz band performing throughout the terminal, sending passengers off on the first flight.

Having started construction in 2016, the new terminal has actually been on the drawing boards since 2011, when airport officials recognized that the original 1959 structure at MSY was due for a refresh and that a new world-class main terminal was needed to address travelers’ changing expectations for convenience and safety. Hailed by the city’s mayor as “the most transformative project for New Orleans since the Superdome,” the 972,000-square foot facility houses 35 gates with the ability to expand to 42, in addition to a 2,000-space parking garage, I-10 highway connection, and hotel development site. 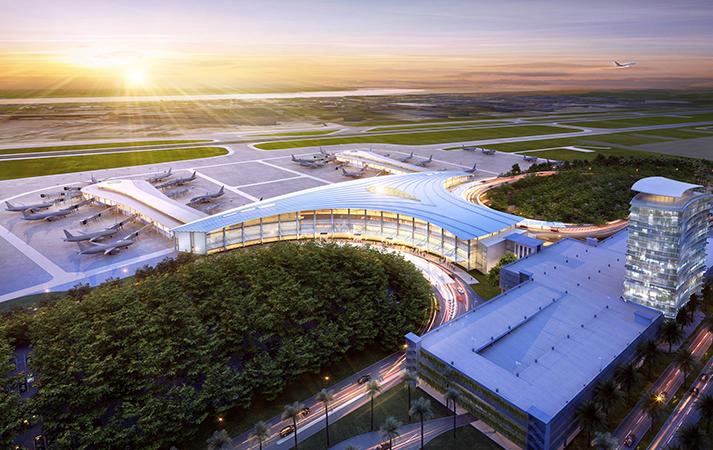 From overhead, the new terminal appears as an inverted T with curved sides, giving it the iconic look desired by airport officials, who wanted a landmark structure with a striking aerial view. Because of its vulnerability to strong storms and natural disasters like Hurricane Katrina, which devastated the city in 2005, the new terminal had to be designed to withstand 150-mph winds. We conducted extensive wind tunnel modeling and on-site testing to ensure the blast-resistant curtan walls could withstand such forces.

Walter P Moore leveraged the fluidity of our digital workflow capabilities to solve complex challenges and accommodate design changes throughout the project. In 2015, a cost reducing effort downsized the terminal while maintaining its distinctive crescent shape, requiring significant changes to the entire building perimeter. Our team was able to redesign the terminal structure and façade in a matter of days, rather than the several weeks that a traditional delivery/change process would have required.

In late 2016, it was determined that the airport’s passenger growth would far exceed original projections. What began as a 30-gate, 650,000-sf terminal grew to 35 gates, almost 1 million square feet, and added an entire additional concourse. The design and construction teams were challenged to incorporate this change because construction of the domestic terminal and concourses was already well underway with 30% of the foundations in place and structural steel being fabricated. Once again, Walter P Moore utilized our digital workflow and seamlessly incorporated the new international concourse into the existing, partially built design.

The structural and enclosure engineering teams were instrumental in helping the architects deliver a complex and dynamic airport project for the City of New Orleans. Our advanced digital workflows allowed us to fluidly incorporate and analyze significant architectural design changes while maintaining elegant, efficient structural solutions. Travelers can now experience a world-class aviation terminal made possible behind the scenes by an industry-leading delivery process.