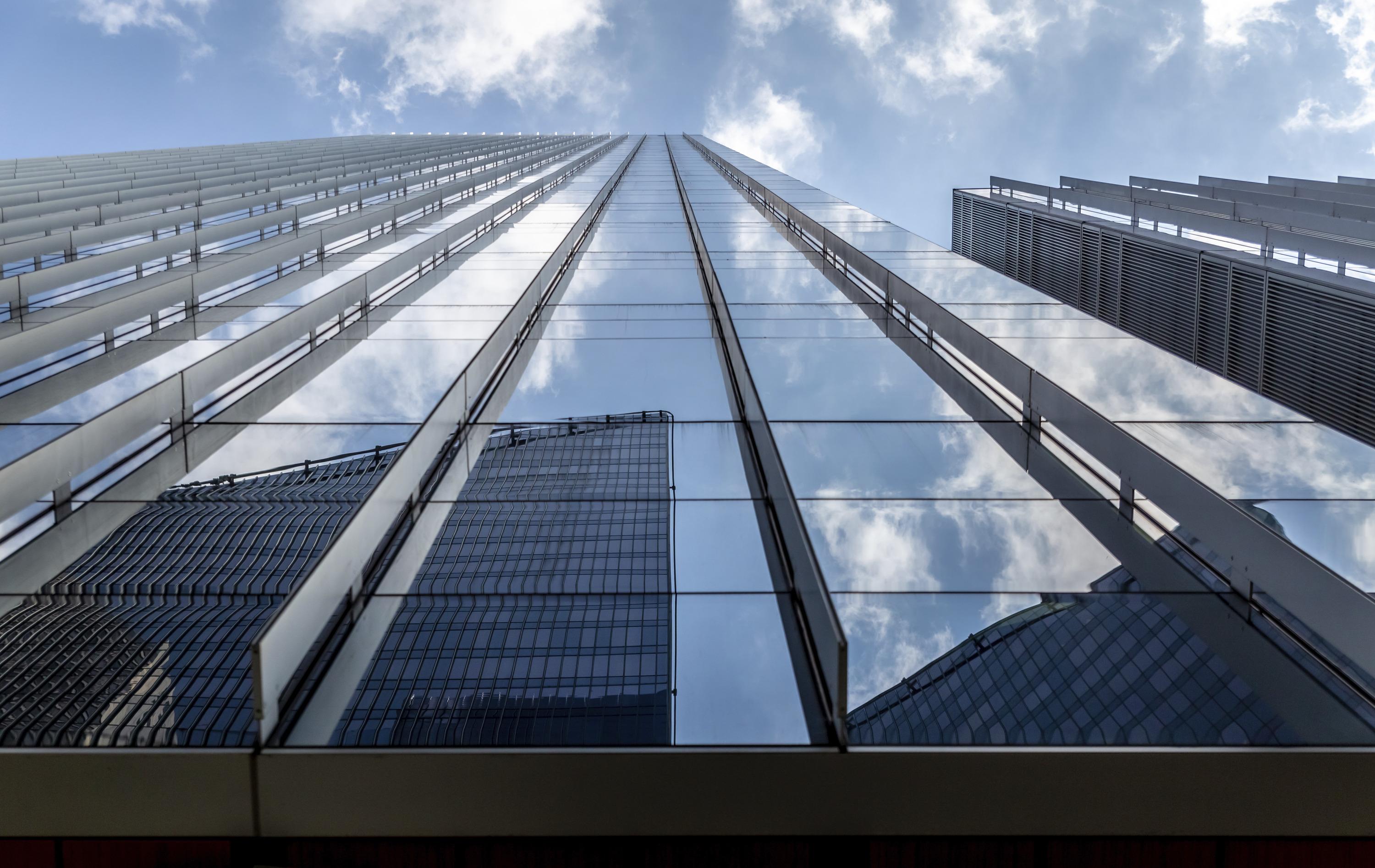 The last year has shown us that as a global community we must mobilize together to achieve solutions in response to a crisis—we are interconnected, and wide-reaching solutions cannot be achieved in a vacuum. The A/E/C industry along with scientists, academia, and policy makers alike agree that climate change is indeed a crisis. In order to prevent catastrophic warming of 2 degrees or more, we must drastically reduce greenhouse gas emissions across every industry.

It is common knowledge among building industry professionals that building operations account for approximately 40% of global emissions. Since the founding of Architecture 2030 in 2005, our industry has been highly successful at reducing building energy consumption and making buildings more operationally efficient. More important, we continue to make progress in the quest for net zero.

Until recently, it is the other piece of the building emissions pie that has received less attention That is the approximately 11% of global carbon emissions that come from the extraction, manufacture, and transport of building materials, their maintenance and replacement throughout a building’s life, and their eventual disposal. This is known as embodied carbon.

Increasing operational efficiency could have a payback period that stretches across the coming decades, whereas embodied carbon reduction strategies are preventing emissions now, while materials are being sourced and buildings are being constructed. While emissions reduction has to date primarily been the realm of architects and MEP engineers, now every aspect of the building construction industry has a role to play in the effort to reduce embodied carbon. 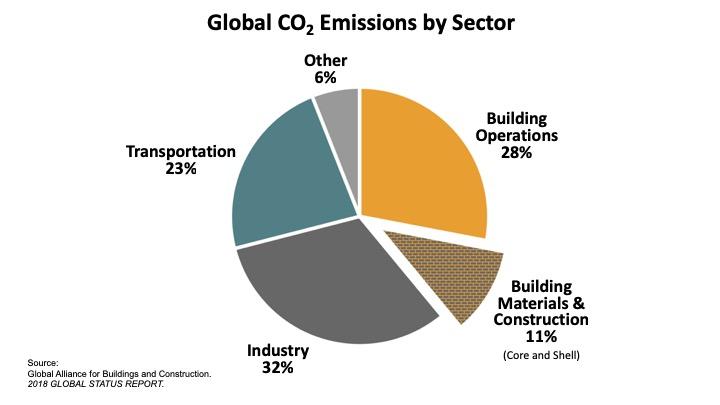 For most buildings, the foundation and superstructure are responsible for the majority of the building’s embodied carbon, with the enclosure system coming in second. Currently, there is not yet robust embodied carbon baseline data in the same way that there is for operational carbon, but the industry is working on it. The Carbon Leadership Forum at the University of Washington has published the Embodied Carbon Benchmark Study and continues to collect more data and case studies on embodied carbon in buildings. In addition, SE 2050 is collecting embodied carbon data from engineering firms to develop embodied carbon baseline data for structures. To encourage further collection of baseline data, LEED v4.1 offers a credit for performing a Whole Building Life Cycle Assessment (WBLCA) to understand the environmental impacts of building materials, including embodied carbon, and provides credits for reducing impacts from a baseline design. WBLCA can help designers understand where the embodied carbon hotspots are in their design and where there are opportunities for reduction. 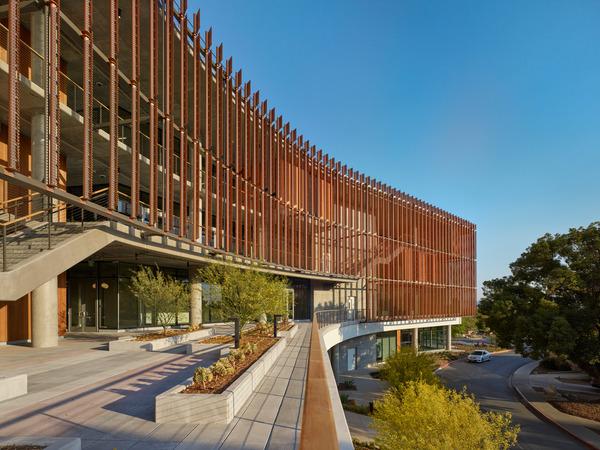 While there are many ways to reduce the embodied carbon in a building project, the façade is an untapped component as it lies at the intersection of several strategies for reduction of building industry carbon emissions. Well-designed high-performance facades can lead to reduced energy use through thermal efficiency and by balancing shading with daylighting, depending on climate zone and time of year. However, many common façade materials are highly carbon intensive to produce. Being more intentional about where and how to use them can hold the key to optimization.

A Closer Look at the Impacts of Façade Materials

Our next step was to look at glazing assemblies. We used Tally, a life cycle assessment (LCA) tool for Revit, to assess three different options for a 20-foot-high atrium curtainwall. We wanted to understand how three different mullion strategies would impact the embodied carbon of the overall wall.

The first strategy we looked at was to minimize the size of the aluminum mullion by using a secondary steel hollow structural section tube at mid-span. The second strategy was to use a steel reinforced mullion to achieve the span, and the third option was to use a deep aluminum mullion with no reinforcing that was also capable of achieving the desired span. Our goal was to find out how much of an impact do these structural and aesthetic choices have on embodied carbon.

In this design exercise, we found that the deep mullion option had the lowest embodied carbon. However, a deep mullion is not always favored by designers who want to minimize the depth of the system. The next best option, in this case, is to use secondary steel to break up the span and enable the use of a smaller mullion. The steel reinforced mullion had the highest impact of the three options we studied, with embodied carbon approximately 20% higher per square foot. Once multiplied across an entire façade, this can make a significant difference in a building’s overall embodied carbon. It could be the difference that enables the project to get a LEED point for environmental impact reduction. 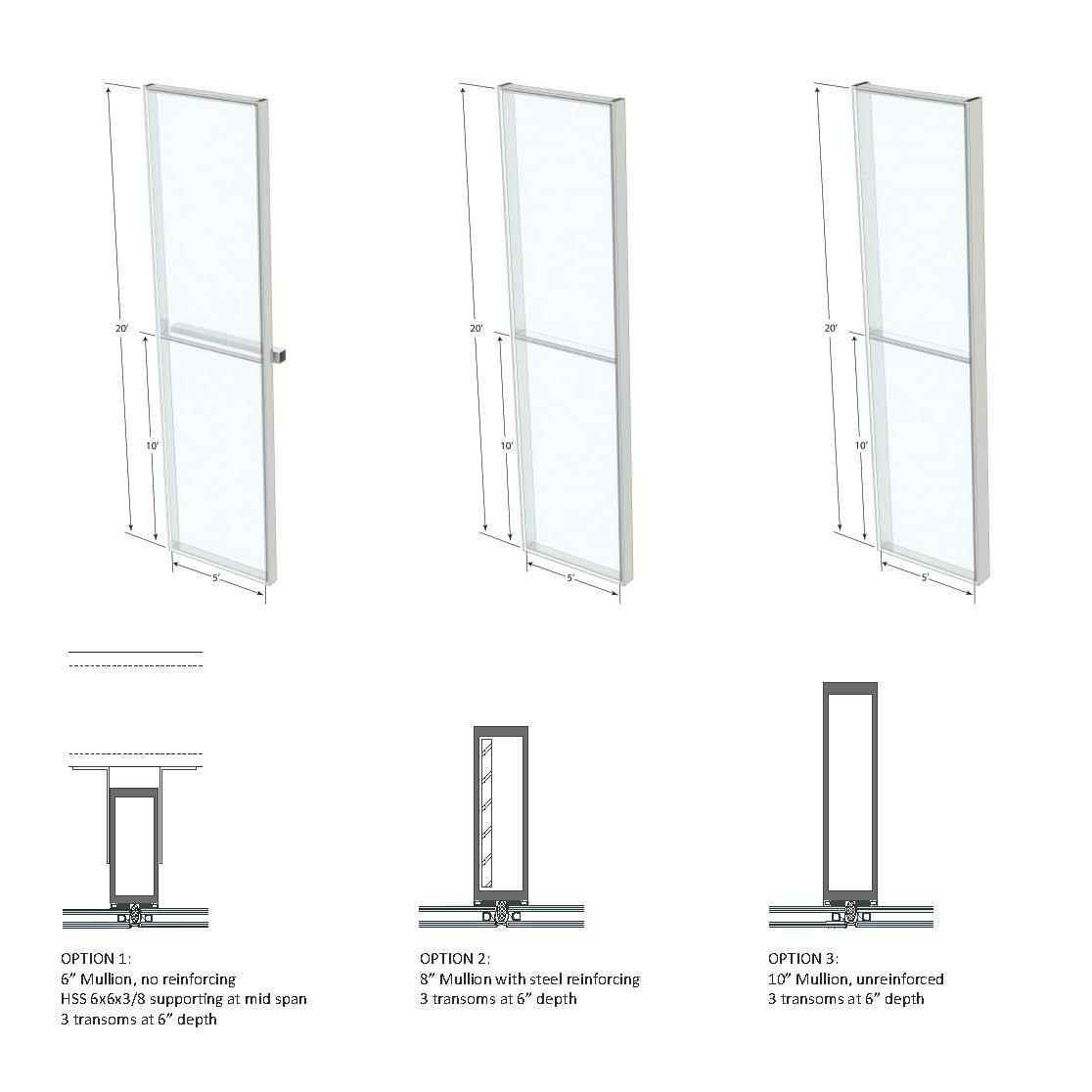 Diving deeper into each assembly, we can identify carbon hotspots and understand how much embodied carbon each component of a glazing assembly is responsible for. Looking at the curtainwall only from the first strategy, we wanted to find out the embodied carbon contributions of the insulating glass units (IGU), aluminum, and steel, normalized per square foot of façade area. In this example, the glass is the biggest contributor to embodied carbon; however, the aluminum has carbon impact disproportionate to its share of the mass of the system. It represents 21% of the mass of the system but is responsible for 32% of the embodied carbon. As a result, reducing aluminum quantities may be a good place to start in order to reduce the overall embodied carbon of this system.

This design exercise provides one example of how embodied carbon can be considered as a metric, balanced with aesthetic concern and cost.

In addition to the study of the three design strategies discussed above that focused on span, there are many additional factors that go into façade design that have embodied carbon implications.

To consider what adjustments can be made to optimize for embodied carbon, we can start by examining performance requirements and selecting the materials that provide the required performance. For example, structural performance drives mullion design and glass buildup and protection against air and water infiltration is directly affected by gaskets and sealant. For the latter items, there is limited environmental impact data available in commonly used LCA tools. Data on the environmental impacts of materials come from Environmental Product Declarations (EPDs), which can be described as a “nutrition label” for materials, providing information on environmental impacts in a standardized format. There are not currently EPDs available in the Tally tool for gaskets or sealant in curtain wall assemblies, so we do not have a complete understanding of their role in the overall embodied carbon of a curtainwall assembly at this time.

First, we will explore what opportunities there are to optimize glazing and mullion design from an embodied carbon standpoint, with a focus on conventional extruded aluminum curtain walls. We can start by optimizing the quantity of aluminum used. One possibility for reducing the cross-sectional area of curtainwall members and thereby reducing embodied carbon, is to use channel sections with a thin trim for the head, intermediate transoms, and sill extrusions. This strategy can also simplify fabrication and installation. Another possibility to explore is using a capless structurally silicone glazed curtain wall system instead of a capped mullion system. A structurally silicone glazed system can result in a reduction in aluminum quantities, but an increase in silicone, for which there is currently limited environmental impact data available in the form of product specific EPDs. Better data on the embodied carbon contribution of various types of sealant will enable a more complete understanding. 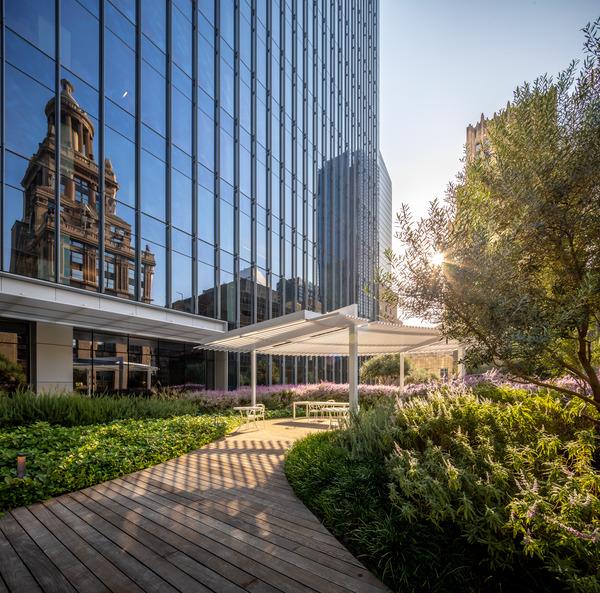 While key performance requirements cannot be relaxed, there are still opportunities to optimize material use. For facades with special performance requirements, introducing additional materials only in the areas where they are needed is key to keeping both cost and embodied carbon low. Often, the glass buildup or mullion size needed in the most extreme case is applied across the entire building for aesthetic consistency. In a recent project, a different approach was taken. Acoustically enhanced glazing was used only on the side of a building facing a busy road, and all other facades used a more standard buildup.

The Future of Low-Carbon Façade Design

So, what does the future hold for low-carbon façade design?

As jurisdictions take a critical eye to their building codes for energy efficiency and operational carbon emissions, embodied carbon will be the next frontier. This will make lowering the embodied carbon crucial to the design and construction process.

In addition to increasing the use of WBLCA in design, we also anticipate these limits to provide a renewed interest in adaptive reuse and retrofits of existing buildings. The impetus behind this is twofold. First, the existing building stock will need retrofits to meet updated energy codes. Secondly, because a building’s primary structure is typically the source of most of its embodied carbon, adaptive reuse of existing buildings becomes a crucial strategy for embodied carbon reduction. The primary structure can be preserved, while enclosure and interior components are replaced. Reuse of an existing structure is typically a lower-carbon alternative to new construction.

The commercial viability of the retrofit market is staggering. In a recent study referenced in their strategy piece Bring the Retrofit Market to Scale by the Urban Green Council in New York City, almost 85% of the city’s existing buildings are likely to still stand in 2050. This study served as major impetus to drive down their energy use as an essential step to addressing climate change, culminating in Local Law 97. The Urban Green Council’s market analysis forecasts that Local Law 97 could lead directly to a new $20 billion retrofit market, in addition to the existing retrofit market. For example, the New York City Housing Authority’s Capital Plan for 2019-2023 includes a total of $6.384 billion in funding from the federal, state, and city levels. Of the anticipated work and subsequent spending to maintain and retrofit existing housing, $158 million is targeted at building exteriors. 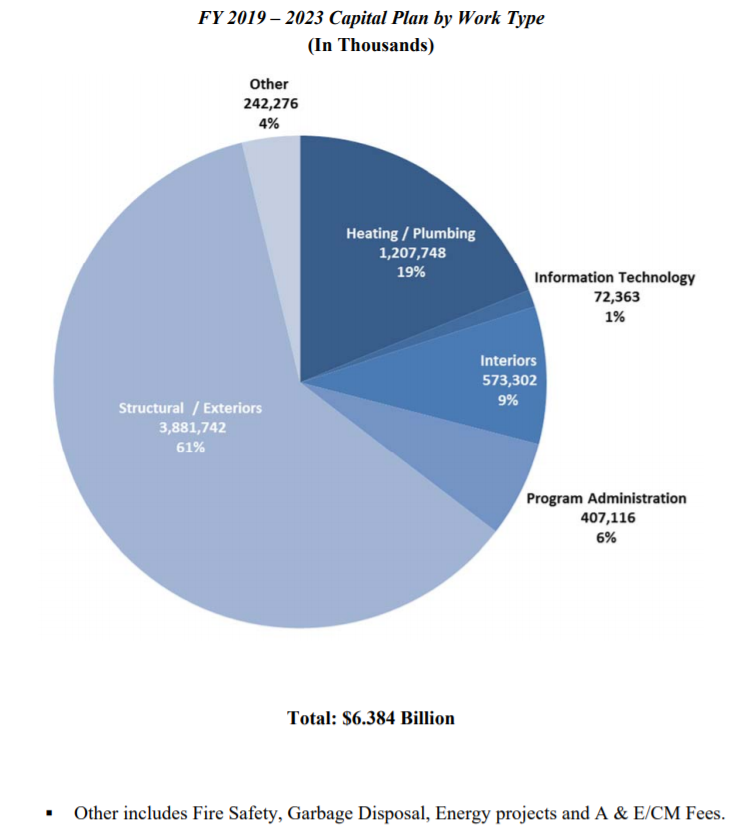 As we build new buildings and reclad existing buildings, the lifespan of a façade system is an important consideration. The lifespan of the entire system is often driven by the first components to fail. As the façade ages, gaskets and sealants deform, allowing air and water to infiltrate to the interior, and the cavity within the IGU will leak, causing air exchange and loss of thermal performance. The next progression in advanced façades could be designing for disassembly and salvaging façade cladding materials and components. Glazing panels in an IGU could be disassembled and reused, assuming that the low-e coating is still effective; however, there are not currently facilities or commercial markets to take advantage of these opportunities. We believe this to be an untapped part of the market that can leverage existing technology. Once designing for disassembly or reuse of glazing is commercially viable—and project jurisdictions have codified limits on embodied carbon—we could see these processes propelled into common use and thus improve the embodied carbon of glazing.

As façade consultants, we work to make smarter design decisions and material choices, and we encourage our clients to consider embodied carbon as a performance and design metric, much like structural, thermal, acoustical, fire, and water infiltration protection. We believe that whole lifecycle carbon must be considered on every project so that the impacts of upfront design choices over time can be better understood, enabling the balancing of embodied and operational carbon.

We challenge manufacturers and contractors to find innovative ways to reduce the emissions associated with materials manufacturing, transport, installation, and reuse or salvaging. Together we can make great strides to counter global warming. It starts with taking a critical eye on how we design, build, reuse, recycle, and adapt.

This article first appeared in the Summer 2021 issue of Intelligent Glass Solutions.