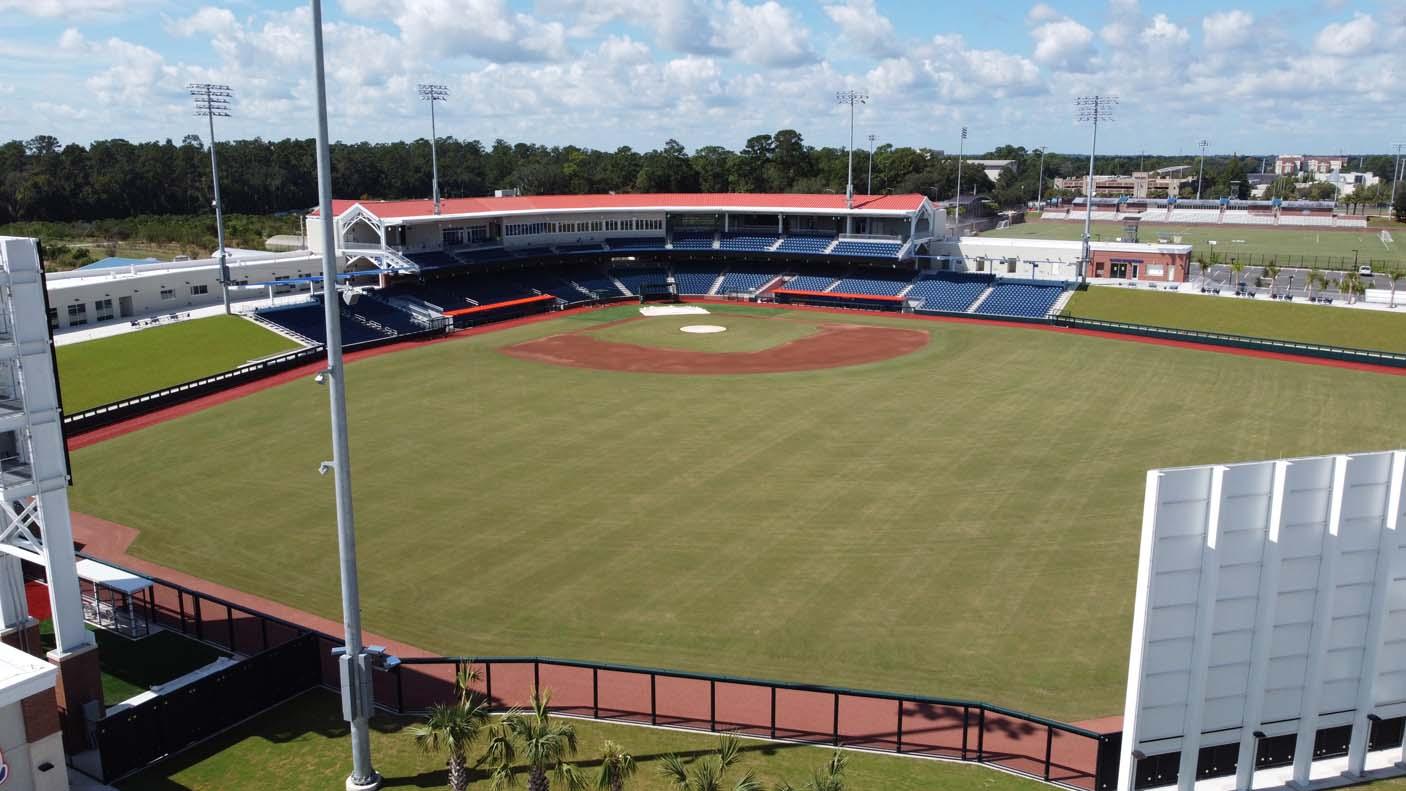 The University of Florida’s new baseball stadium, Florida Ballpark at Alfred A. McKethan Field, in Gainesville, Florida, is one part of the university’s plan to enhance the overall experience of players and spectators in their athletic facilities. The $55 million, 7,000-seat, 135,000-sf stadium features all of the modern amenities a player and fan could imagine.

Instead of displacing the baseball team for an extended period by rebuilding on the same site, the team was moved to a new home near the softball complex. The new location is not only convenient for the baseball team but also makes room for the construction of a new, Walter P Moore-designed, football training complex.

Walter P Moore served as the structural engineer for the new baseball stadium.

During the conceptual phase, both steel and concrete were considered for the structural system. However, it was important the ballpark resemble the collegiate gothic style that defines the university’s architecture. Structural steel accomplished this goal.

“One of the ways we made that connection was through the expression of the structural steel and steel detailing of the seating bowl, scoreboard, and ballpark canopy,” said Zach Allee, associate principal at Populous. “By cantilevering the structural steel of the roof, we were able to shade the upper-level seats, while using that deck to shade the seating below for ultimate fan comfort throughout the ballpark.”

Prior to construction in 2019, cost estimates on the stadium’s initial design were higher than expected. The owner, design, and construction teams spent months reviewing and finalizing designs to fit the budget. The project could not miss the final delivery date as its completion was necessary to allow demolition of the old baseball stadium and begin construction of the new football training complex. 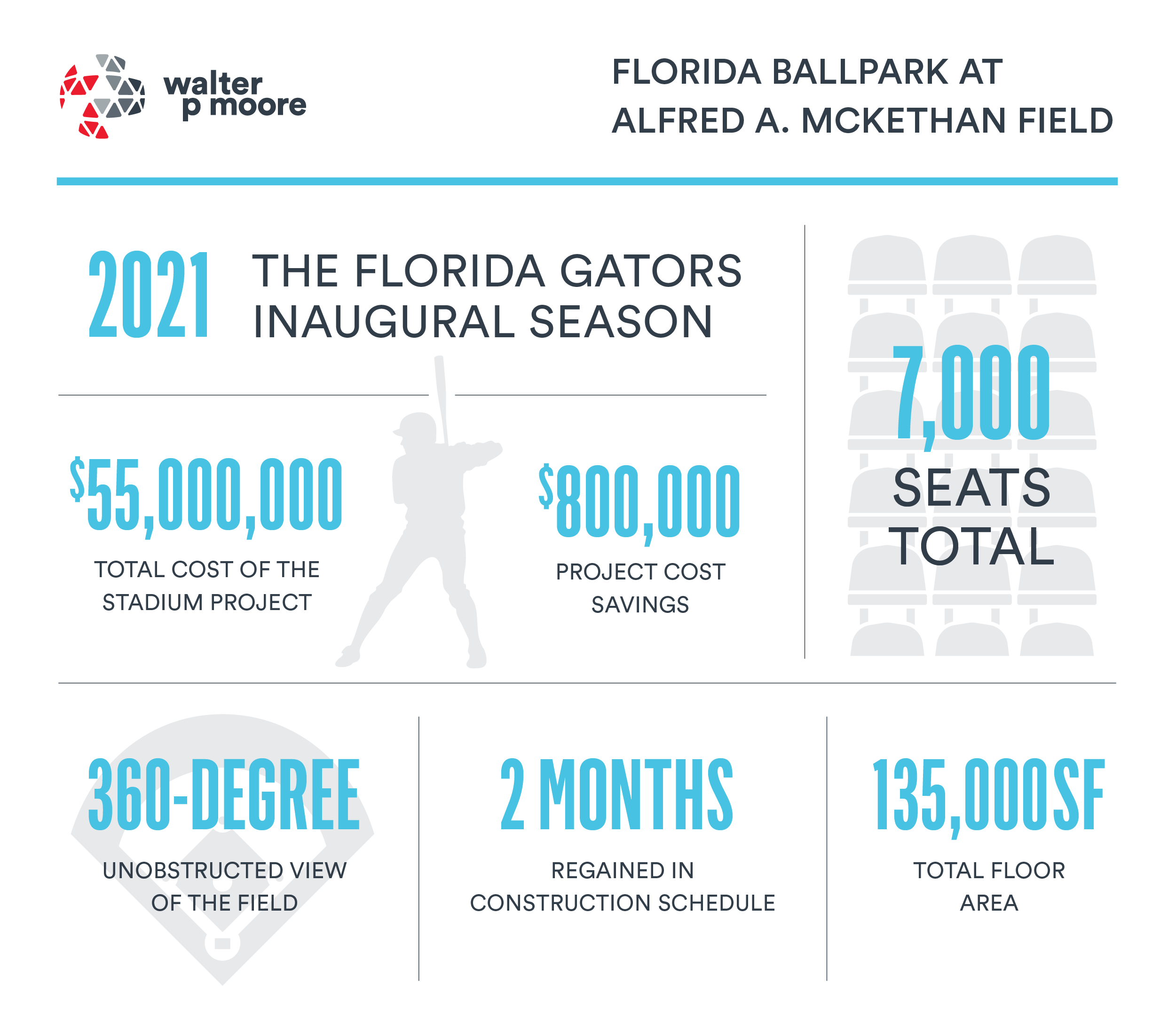 The solution to the schedule challenge came in the form of Walter P Moore’s integrated delivery process. The firm’s construction engineering team joined the project to simultaneously prepare a steel fabrication (LOD400) model as the structural design work was completed. This process is a contrast to traditional steel delivery where 2D design documents are handed off to a steel fabricator for interpretation and implementation after design documents are completed.

“When Walter P Moore approached me with the idea of using their construction engineering services for structural steel detailing on the baseball project, I was initially skeptical,” said Adam Cowan, operations manager, Brasfield & Gorrie.

Because structural steel detailing took place concurrently with the structural design, it enabled the mill order model to be given to the steel fabricator on the day they were awarded the project. Steel was ordered the next business day.

“The collaboration allowed for quicker connection design preferences as well as our means and methods to be incorporated into the steel detailing,” said Jason Hall, executive vice president, GMF Steel Group. “This streamlined process ensured that our standard of quality was upheld, while also shaving weeks off the schedule.”

This reformatted process yielded several benefits to the design and construction of the stadium. First, it allowed the project team to coordinate and finalize the design before securing the steel mill order. Second, this method allowed a more thorough understanding of the design intent by prospective fabricators, which helped reduce uncertainty and risk. Finally, this nearly eliminated review comments required on the shop drawings from the design team, with corresponding reductions in processing time from the architect, builder, fabricator, and detailer.

On a job of this size and complexity, and with traditional delivery methods, RFIs related to steel detailing, fabrication, and erection are very common; but there were zero RFI’s on the project during these phases for the baseball stadium.

“Another main benefit we noticed was the elimination of a lot of back-and-forth and RFIs during the detailing process,” Cowan said. “Walter P Moore’s detailers were working hand-in-hand with their designers, so questions were answered before and during shop drawing generation.”

Production of the LOD400 model during the design phase also proved to be valuable to the precast seating unit subcontractor. The team had adequate time to coordinate the interfaces between the steel and precast in a virtual environment, which brought further schedule gains in the field compared to traditional methods.

“The initial connection design coordination was extremely beneficial,” said Richard Pope, project manager, Gate Precast. “This allowed open discussions on constructability for the engineering during installation and expose any issues early and without the later stress of field modifications.”

Despite the time constraints associated with the stadium, construction finished on time in July 2020 and within budget.

“The ability to create and customize the detailed steel shop drawings was the single most powerful item that saved the project budget and schedule,” said Joe Walker, a principal in charge at Walker Architects. “Walter P Moore’s efforts saved approximately $800,000 on bid day.”

Conventional delivery methods likely would not have solved the challenges of the project schedule without introducing higher levels of risk in terms of cost, field durations, or both.

There is only one thing left to do—play ball! 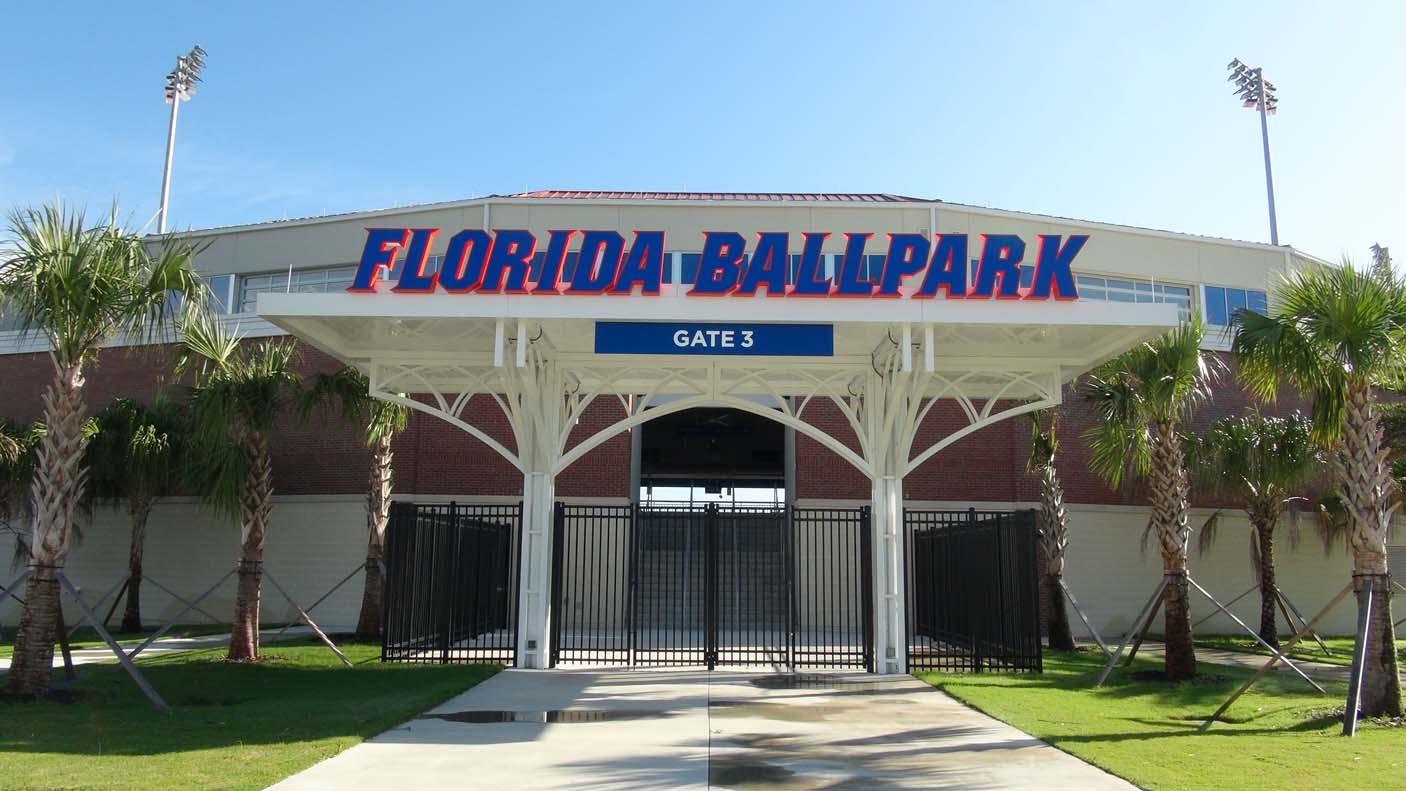 Dylan Richard is a principal and senior project manager at Walter P Moore.

Stephen Blumenbaum is a principal and director of construction engineering at Walter P Moore.