The Hidden Gems of Eastern Glades

The Hidden Gems of Eastern Glades 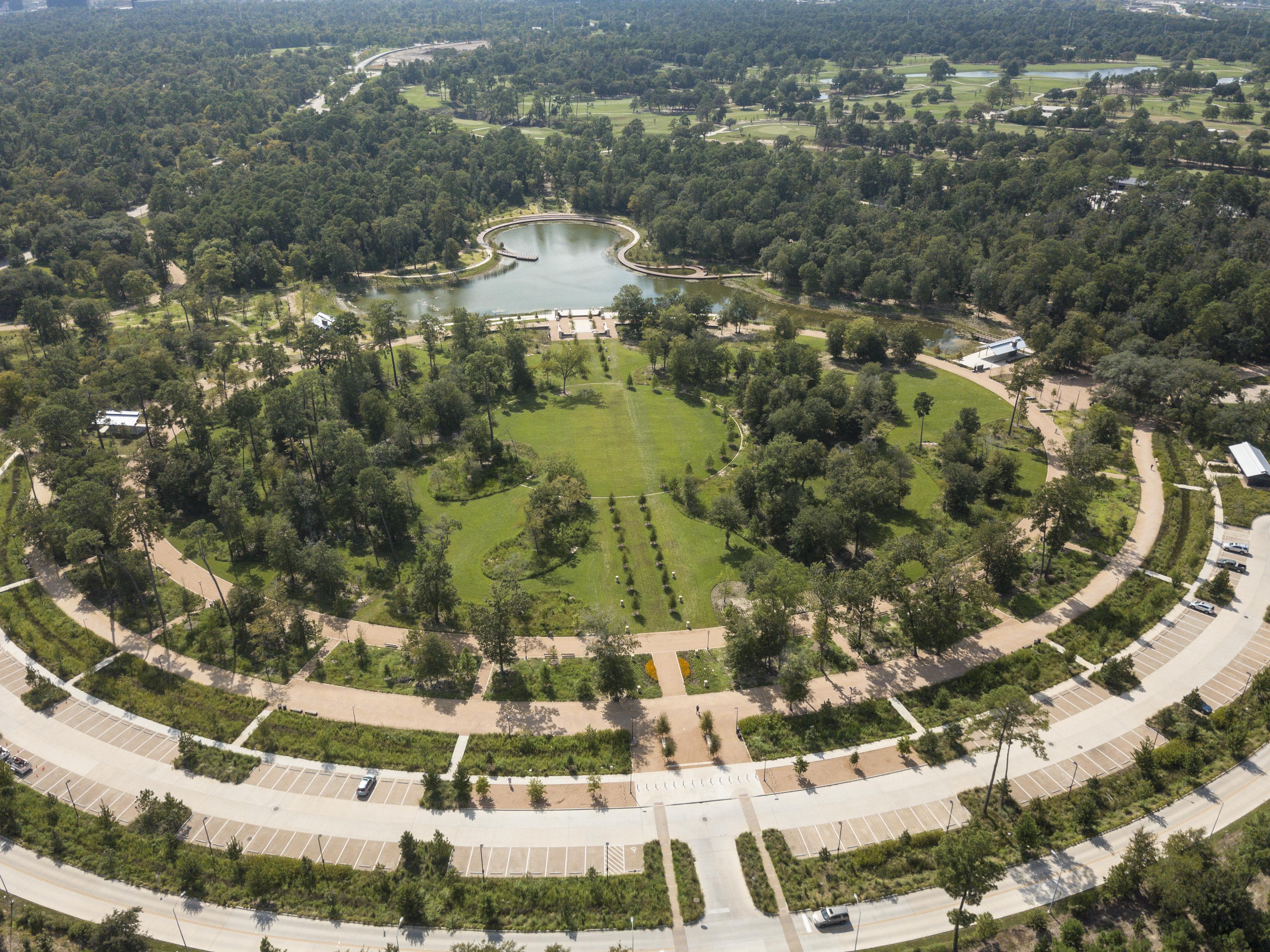 As Memorial Park developed a new, 10-year Master Plan designed by landscape architectural firm Nelson Byrd Woltz, they sought to increase patronage and expand the park's usage. Walter P Moore joined the team to redesign and reconstruct the widely underutilized Eastern Glades section of the park and establish the park as an all-day destination for Houston residents and visitors.

Hines Lake
The highlight of the Memorial Park Eastern Glades development is the prominent Hines Lake, which provides many benefits to the site—some hidden to the untrained eye. Eastern Glades was designed to both minimize impacts from development and highlight the importance of conservation and environmental stewardship. Concepts such as water reuse, water treatment, and flood resilience were integral to the project. 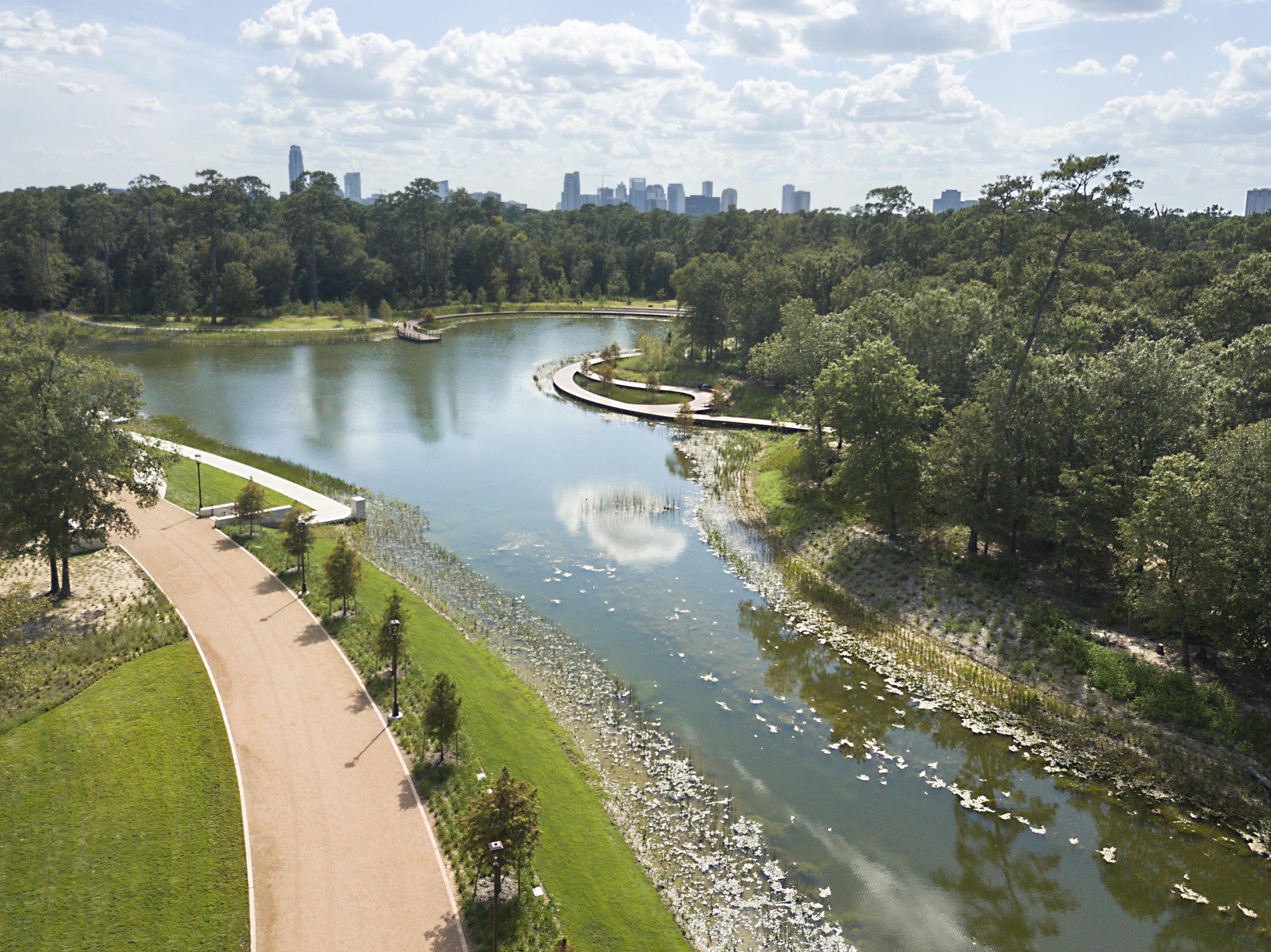 In addition to habitat and recreation benefits for the community, the lake was designed as a multi-function basin that stores and treats runoff for re-use as irrigation and holds stormwater runoff during large rainfall events to protect the site and surrounding area from increased flood risk. To address the owner’s concerns for a natural-looking aesthetic, most of the infrastructure is hidden below at least three feet of water in the lake. Above this level, the park will re-use the first foot of water for irrigation in place of buying potable water from the City. A water balance study used statistical rainfall analysis and local information on seepage and evaporation to determine the percentage of total irrigation demand that would be met using one foot of water storage. Working with a lake consultant designing the circulation system, it was determined that the lake will be fully refilled with rainfall and stormwater capture from the site most months out of the year.

The lake also functions as a stormwater quality treatment system and includes two sediment forebays at the lake’s inflow points to restrict sediment and debris particulates entering the main body of the lake, which substantially reduces maintenance dredging of the lake. To further promote settling of polluting particulates, a small weir plate on the outlet restricts outflow for the first few inches of ponding, thus slowing the release and increasing the residence time of the “first flush” inflow of stormwater, which generally contains the highest number of contaminants. The increased residence time promotes sedimentation of pollutant-carrying solids that may be in the stormwater entering into the lake during the beginning of a rainfall event. The result is improved water quality leaving the lake, which ultimately enters one of the city’s major waterways, Buffalo Bayou.

"Walter P Moore has been an integral part of Clay Family Eastern Glades from the initial concepts of the 2015 Memorial Park Master Plan, and they have been a true partner in the development and construction of the project. Their technical expertise was instrumental in the initial planning and design of the supporting infrastructure, as well as developing the stormwater treatment functions within the lake and surrounding habitat," adds Randy Odinet, Vice President, Capital Projects and Facilities of Memorial Park Conservancy.

Sustainable Design
Year-round, the lake is designed to provide aquatic wildlife habitat, afforded by intentional non-uniform shaping at the base and edges of the lake along with native wetland and riparian planting along the lake edge slopes. The intentionally natural look of the lake was intended to create a habitat for native creatures.

“Hines Lake and wetlands offer inviting views from the Clay Family Eastern Glades and serves as a beautiful backdrop to two lakeside pavilions. It creates new wildlife habitat and improves water quality by filtering runoff from the surrounding areas through its perimeter wetlands,” says Arnold. “The lake serves as a key space for nature-watching and was constructed with habitat in mind; there is depth in the center and shallow wetland shelves encircle the water.” Many turtles, fish, frogs, and water birds call Hines Lake home.

The wetland planting around the edges of the lake serves an aesthetic purpose and improves water quality as well. In concert with the forebays, the wetland planting is designed to polish the water, limit shoreline erosion, and decrease lake maintenance. The dense vegetation also provides a natural look and feel to the lake’s surroundings to give visitors a sense of being in nature. 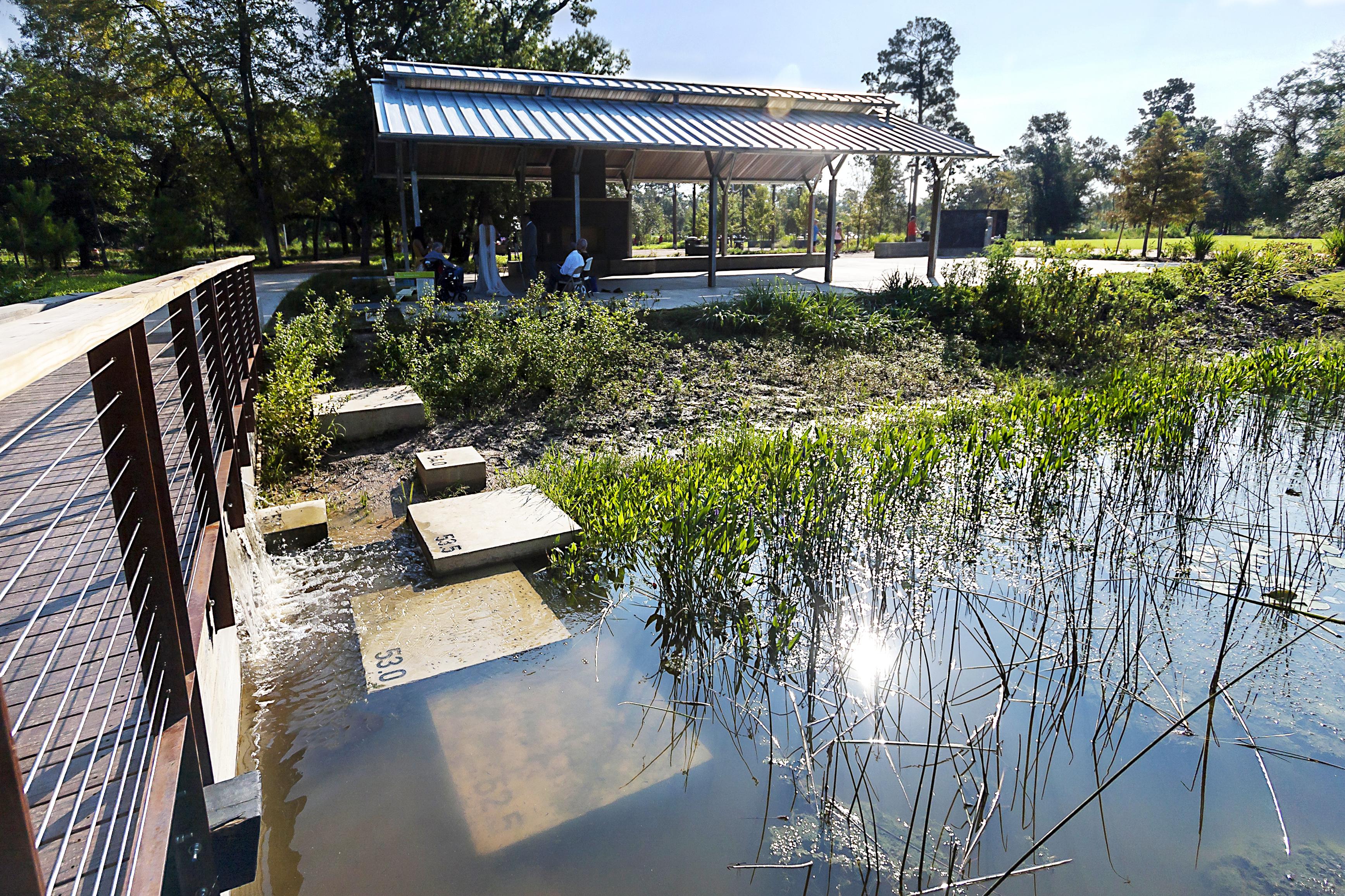 Portions of the Eastern Glades area are naturally swamped land, but a goal of the project was to ensure the pedestrian trails do not become inundated with water during a rain event. The original plan for the trails was to raise them above the swampy areas. However, this strategy would block natural drainage patterns. Facilitating the natural drainage patterns was accomplished by adding small drains at curb breaks and providing small trenches that allowed water to pass beneath the trails. A total of nearly 30 drains were installed in low spots along some of the outer trails.

Eastern Glades' design includes grassy lawn areas for recreation and picnicking interspersed with pockets of naturally planted “island” areas that preserve some of the most significant trees on the site. Native plants are prevalent throughout the project, reducing the need for frequent fertilization, thus limiting the environmental impacts to the waterways. Walter P Moore designed the lawn areas to rapidly drain either by infiltration into the underlying soils or to undisturbed “island” areas where the water can slowly infiltrate. The grading was done in such a way that the grassy areas can be used soon after a rain event without damage to the landscape or inconvenience to visitors.

Expanded Offerings
Clay Family Eastern Glades was delivered in the summer of 2020, a time when finding respite in nature was needed most. This new space for Houston significantly expands picnicking; adds new parking and restrooms; establishes Hines Lake and wetlands; honors the park’s military history; and provides trails, boardwalks, and opportunities to experience and learn about natural habitat systems.

“Eastern Glades offers something for everyone—from runners along the Seymour Lieberman Trail to picnicking families to students of ecology and those interested in Houston’s and the nation’s cultural history,” add Arnold.

The 100-acre section of Eastern Glades is a gem among outdoor enthusiasts and nature aficionados. While much of Memorial Park remains an athlete’s playground, Eastern Glades invites visitors to take a moment to slow down, take in the beauty of their surroundings, and stay awhile. Meanwhile, the carefully laid infrastructure does its work behind the scenes, keeping the park lush and pedestrian-friendly.

David Lundberg is an Associate and a Senior Engineer in the Civil Engineering group.