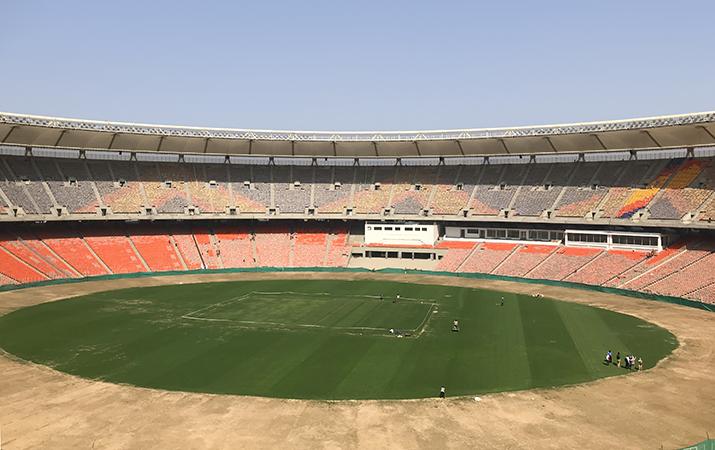 "Motera Stadium is double the size of the venue it has replaced and creating a roof for the venue proved a challenge.

Walter P Moore was contacted by L&T to join the project team because of their experience in sports structures and lightweight longspan roofs. Once the team was selected and design began, the experts at Walter P Moore began to consider options for Motera’s
roof system.

Taking into consideration the fact that the city of Ahmedabad is located in seismic zone 3, the roof needed to be lightweight to reduce seismic demand and develop an economical roof system. Therefore, very early in the design phase, it was decided that the best option would be to incorporate a lightweight cable-supported tensile membrane roof supported by steel columns. Additionally, the team decided that the reinforced concrete bowl and the roof structure needed to be independent of each other. This decision was primarily motivated by the seismic hazard for the project. Without such an approach, the cost premium on the roof and the supporting structure due to seismic forces could have been significant.

Amol Acharya, Director of Structural Engineering for [Walter P Moore] in India, said: “The reinforced concrete bowl structure had expansion joints whereas the roof structure, due to virtue of its nature cannot have such joints. A combined interaction, analysis, and behaviour of such structures are complex. This problem was simplified by having a separate structural system for the roof and the bowl. This strategy also allowed independent teams to work simultaneously on two separate structures to meet an aggressive project schedule.”

The cantilever span of the tensile membrane system is around 30m and covers the upper bowl of the stadium. The tensile membrane system primarily comprises of a two-chord compression ring at the outer edge (stadium perimeter) and a single tension ring
cable on the inner edge (toward field of play). The radial cables are pretensioned and tied to the outer compression ring with cable connectors forming ridges and valleys for the membrane roof. The radial cables are aligned in such a way that rainwater flows over the membrane and drains into the gutter positioned along the lower chord of the compression ring, this, in turn, provides shape to the membrane panel.

The outer compression ring is supported on the structural steel ‘V’ columns along the circumference at regular intervals. In addition to serving as gravity supports, ‘V’ columns also provide resistance to lateral loads for the roof.