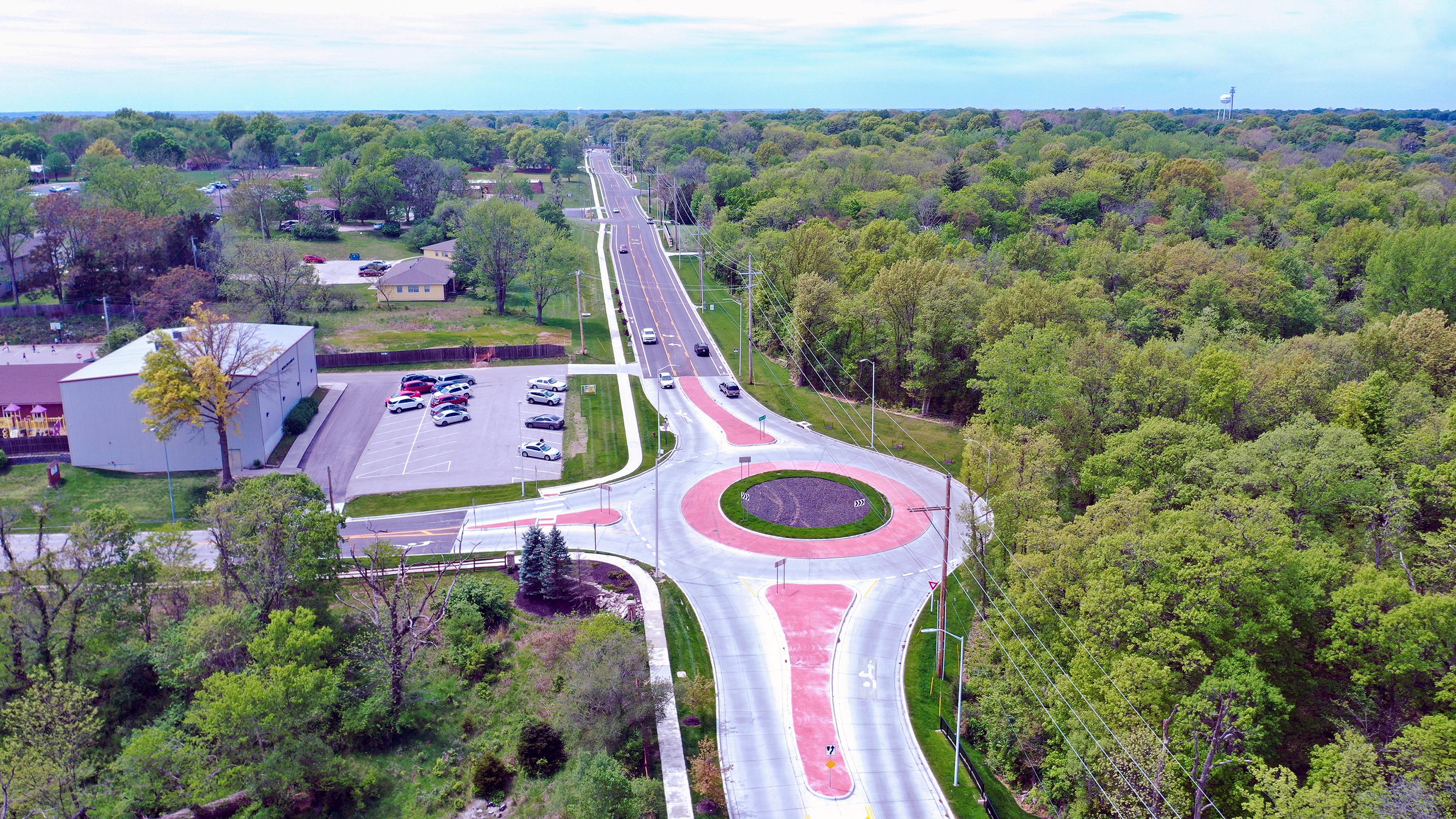 In 2014, infrastructure improvements designed by Walter P Moore were completed to NW 72nd Street west of I-29 in Kansas City, Missouri. During construction, it was decided that further improvements would also be made to the corridor on the east side of I-29, which was completed in 2020.

The overall goal of the improvements was to develop a design that offered the greatest value to all users of the corridor—vehicles, pedestrians, and cyclists as well as the individual property owners adjacent to the roadway. Ultimately, this balance was delivered by the Walter P Moore team by integrating design elements such as retaining walls, minimizing vertical curve lengths while improving sight distance, adding on-street bike lanes, providing sidewalks, and designing a roundabout.

To improve the safety and connectivity of the area and better serve the community, Walter P Moore worked with the City of Kansas City staff to develop several options for improvements during the preliminary design phase. These options included analyzing different roadway sections to develop a solution that balanced construction costs, right-of-way and easement acquisitions, earthwork, and disruptions during the construction phase of the project. 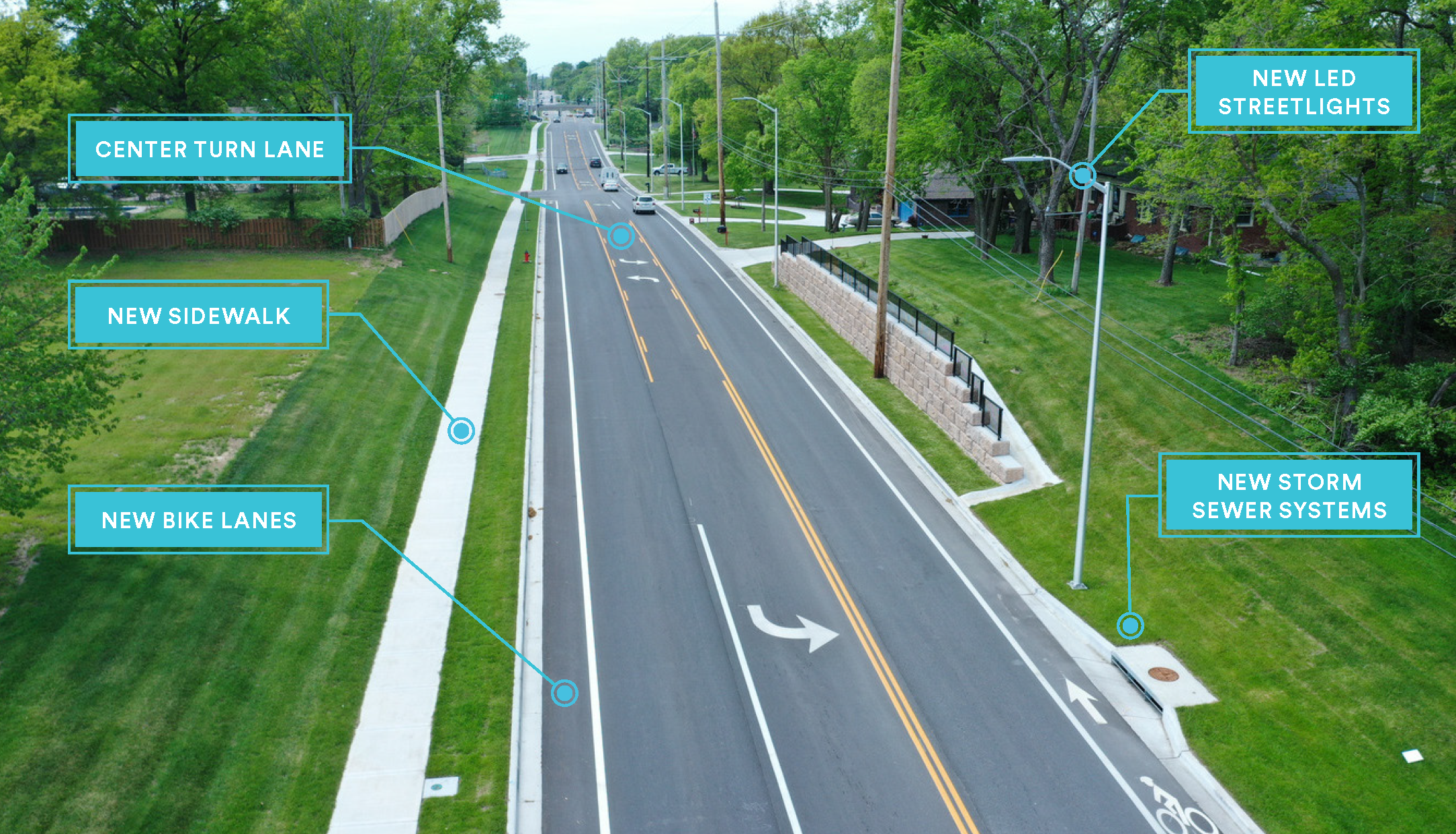 Minimizing Disturbance
NW 72nd Street is an outstanding example of how to construct a new, widened roadway section within a developed area. Key elements of the project’s design included minimizing disturbed areas, avoiding the root zones of mature trees, and employing retaining walls in strategic locations.

All the stormwater runoff generated on the project drains into nearby Lake Waukomis, which is a privately owned and maintained water body. One of the existing storm sewer outfalls on the roadway discharged into an open ditch between two properties that were experiencing signs of erosion.

During the design process, the Walter P Moore team discussed the pros and cons of extending the underground storm sewer piping, which was implemented to reduce future erosion of the drainage channel and sediment from entering Lake Waukomis. Ultimately the piping system was extended through the backyards to convey the stormwater from the roadway and improve the surface drainage of the adjacent properties.

Master Planning
Ultimately, solutions included a three-lane roadway section with a center turn lane, on-street bike lanes in both directions, and a sidewalk along the south side of the roadway. The three-lane section now matches the roadway section on the west side of I-29 to provide continuity throughout the corridor and continuous traffic flow. The on-street bike lanes add value to the neighborhoods and the community while fulfilling the Bike KC Master Plan Network and Kansas City’s Complete Streets ordinance which promotes equitable multi-modal access to all roadway users.

Maximizing driver sight distances between two existing hills within the corridor was a key element of the roadway design. The peak of the hill at the Tomahawk Road intersection was lowered approximately two and a half feet and the hill east of N Crosby Drive was lowered more than four feet, resulting in a substantially safer corridor for all users.

The new roadway crests were carefully located to minimize grading impacts on adjacent properties. Two large-block modular retaining walls were added on the north side of the roadway to minimize grading and earthwork costs. The upgraded NW 72nd corridor also features curbs, streetlights, landscaping, a stormwater system, a new water main, and a roundabout at the intersection of Overland Drive.

Walter P Moore and the City of Kansas City elected to design a roundabout at the intersection of N Overland Drive. Future traffic volumes at this intersection are anticipated to increase dramatically now that the NW 72nd Street roadway corridor improvements are completed, and commercial development occurs east of the project. Walter P Moore looks to add value to our client’s projects and this new roundabout now will avoid costly future traffic signal upgrades to this intersection.

Now, a visually appealing and safer addition to the community, the NW 72nd Street Improvements project was nominated by the City of Kansas City, Missouri, and received the 2022 APWA KC Metro Chapter Public Works Project of the Year Award in the Transportation Category.