Long Spans for the Longhorns

Long Spans for the Longhorns 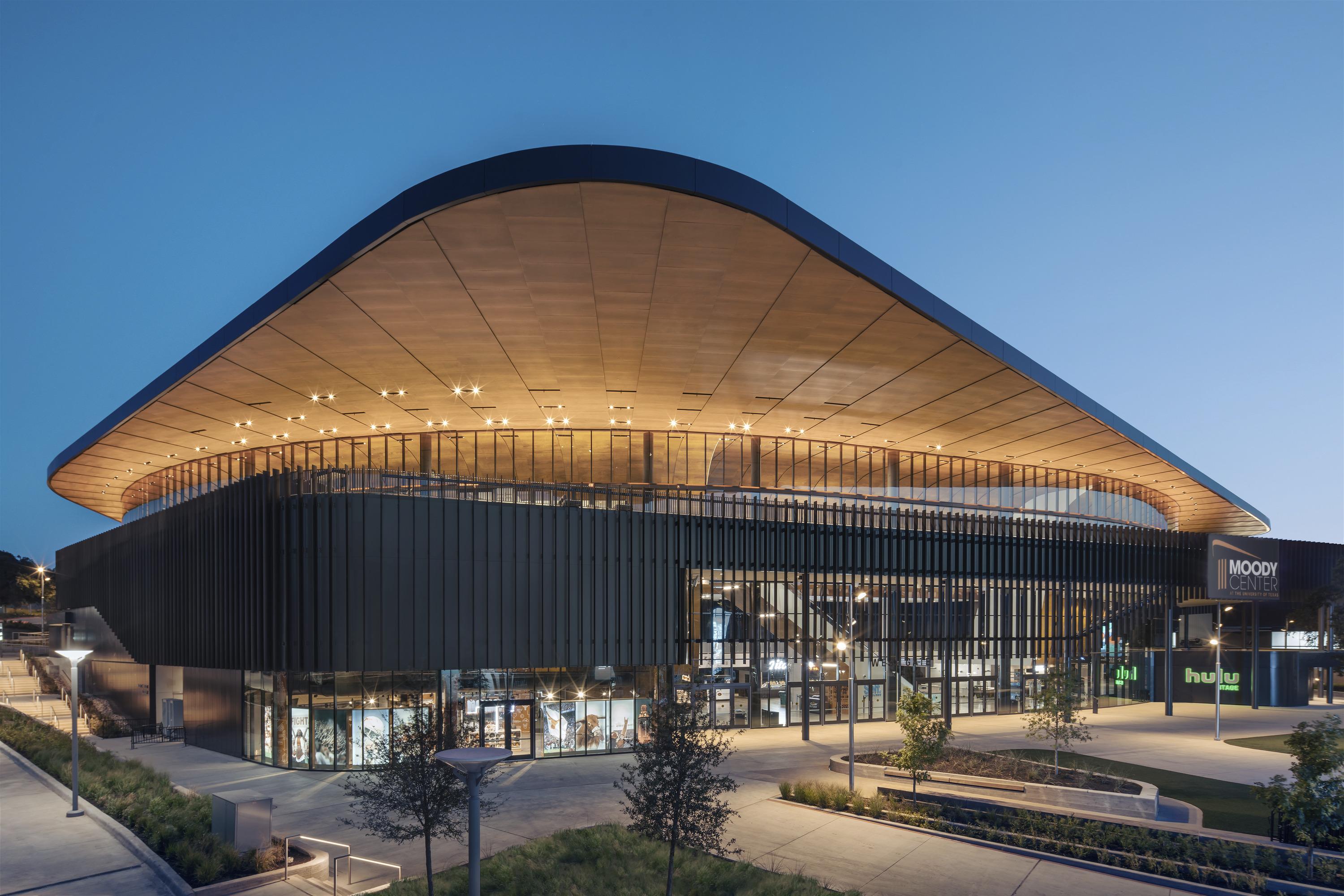 This article by Usnik Tuladhar originally appeared in the November 2022 issue of Modern Steel Construction.

The Moody Center in Austin is making waves.

The multi-purpose arena, which opened this spring on the University of Texas (UT) campus, has already hosted musicians such as George Strait, the Eagles, Jack White, Roger Waters, and Andrea Bocelli, establishing itself as a premier venue in a city whose slogan is the Live Music Capital of the World.

The Moody Center also serves as the new home for UT’s men’s and women’s basketball teams, replacing the 45-year-old Frank C. Erwin Jr. Events Center. The new arena, which was designed by architect Gensler and structural engineer Walter P Moore, has a seating capacity of 10,000 for basketball games and 17,500 for concerts and also includes 2,000 premium club seats, 57 loge boxes, 44 suites, and a 50-person VIP lounge. The exterior combines a 360° glass façade with approximately 400 black anodized aluminum fins that function as solar shades. Cantilevering beyond this façade is a steel-framed, wood-paneled high roof that facilitates shaded views of the UT campus, downtown Austin, and the State Capitol of Texas.

The new arena is one of three major sports/entertainment venues that have opened recently in Austin, with the other two being UT’s Darrell K. Royal Texas Memorial Stadium South End Zone project and Q2 Stadium, home to Major League Soccer’s Austin FC team. Located just south of and across the street from Texas Memorial Stadium and another soccer stadium (Mike A. Myers Stadium and Soccer Field, UT’s soccer and track venue), the Moody Center is situated on a sloping site with an elevation change of 40 ft moving from west to east and below the Capitol View Corridor. A Texas State law aimed at preserving protected views of the Texas State Capitol dome from various points around the city prohibits any construction intersecting with the view corridor. Because of the associated height limitations, a significant portion of the facility had to be located below grade, and the event floor itself sits 70 ft below the high grade along the east entrance.

Because much of the arena is underground, concrete frames the seating bowl, but the roof framing and its support columns are steel. Around the perimeter of the building, the long-span steel roof cantilevers up to 75 ft beyond the building edge to create a shaded entry space for the warm climate of Austin and appears to float above the glass curtain wall.

“The thin profile of the cantilevered roof is a major design element of the building and required the versatility of steel,” said David Lynch, principal and studio director at Gensler.

The entire roof structure is supported on a ring of exposed 24-in.-diameter structural steel columns, which are filled with concrete and designed for fire loads. The structural economy offered by these composite columns also yielded the benefit of avoiding the need to coat them with intumescent paint.

“A two-way grillage made of W36 steel girders was used to create a simple but stiff structure,” said Mark Waggoner, senior principal and senior project manager at Walter P Moore, of the roof framing. “Because the cantilever length undulates across the corners of the arena, the longer cantilevers can lean on the shorter cantilevers through the orthogonal layer of the W36 girders.”

The advanced roof structure supports amenities designed to make the building flexible for a variety of events. These include the central retractable video board, a 125-ton steel-framed showrigging grid including a tension wire rigging platform, and a mechanized closure system that lowers from the ceiling and can covert the venue from 17,500 seats to the 10,000-seat configuration in just five minutes. The project incorporates 2,654 tons of structural steel in all.

To read the full article, visit the November 2022 issue of Modern Steel Construction.

Usnik Tuladhar is a project manager at Walter P Moore. He can be reached at utuladhar@walterpmoore.com.