Mixing It Up in Midtown

Mixing It Up in Midtown 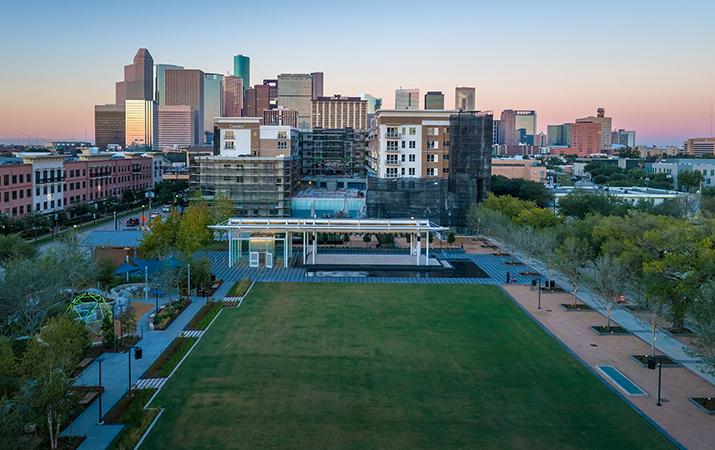 Houston is an eclectic mecca known for its rich museum district, diverse food culture, entrepreneurial spirit, and green spaces that rival Central Park — welcome Midtown Park. This landmark project includes an almost three-acre park with a parking garage directly underneath and other amenities such as an entertainment pavilion, water features, and restaurants. This serene and expertly designed escape is all inconspicuously nestled in the midst of one of Houston’s most bustling neighborhoods.

“In addition to increasing community gathering opportunities and enhancing the quality of life for current Midtown residents, the park will become an economic development catalyst to attract new development to Midtown. Parks help to maximize the long-term value of real estate since businesses and residents are willing to pay a premium to be near parks,” says Marlon Marshall, Director - Engineering & Construction at Midtown Redevelopment Authority (MRA). 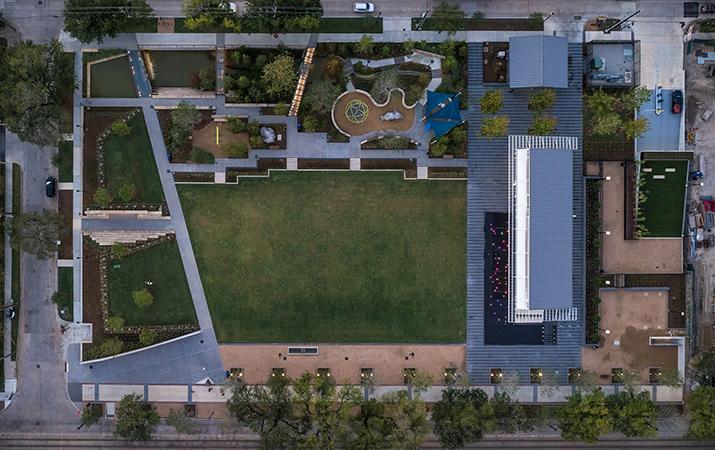 In 1992, the rector of Trinity Episcopal Church started a grassroots effort to revitalize Midtown, bringing together urban planners, property owners, and residents to form the MRA. Under the persistence of the MRA, Midtown began to once again thrive and develop into the revitalized area that exists today.

“In 1999, the MRA began working with developers to assemble the six-acre tract of land commonly referred to as the SuperBlock for many years,” says Marshall. “The project has evolved many times over the years with additional land acquisitions, land swaps, and developer agreements to become the six-acre mixed-used development project currently under construction.”

Collaboration is Key
With nearly 10,000 residents, Midtown is one of the most walkable neighborhoods in Houston, but balances that with a concerning lack of parking space. An effort to address these challenges led the MRA to develop their “super” project, the Midtown Park and Garage. The vision for the current full six-acre mixed-used project with an underground parking garage was developed by the Midtown board, staff, and design team consultants along with community and stakeholder-driven input. “We wanted to create a premier urban park space in the heart of Midtown to become the focal point for the community and act as a catalyst to attract new development along the Main Street corridor,” says Marshall.

The owner selected Walter P Moore as the lead consultant and took full advantage of the comprehensive services. “With the addition of parking to the project, there was a need to add a parking development firm to our team,” explains Marshall. “We had recently engaged with WPM as our consultant engineering firm on successful mobility and roadway infrastructure projects, and we were fortunate to have access to the Walter P Moore parking team to guide us through the development of the parking garage.” 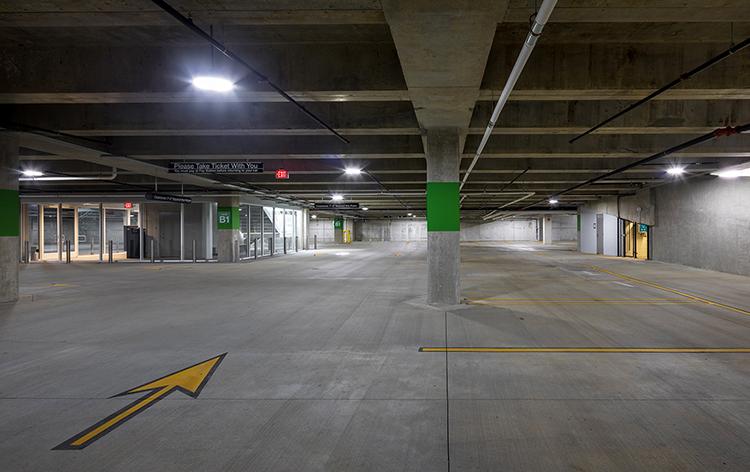 Walter P Moore provided expertise in civil engineering, enclosure diagnostics, parking, structural engineering, traffic engineering & ITS, and water resources engineering. “The goal was to bring nature to Midtown and revitalize the East Side which had experienced a decline in retail occupancy,” says Brian Lozano, Director of Parking Services at Walter P Moore.

Although the final project design changed significantly throughout the process, all parties partnered together to meld structures in an effort to preserve the integrity of the park’s purpose and view corridors. “Because of the complexity of the structure and the simultaneous construction of Camden’s multi-family housing on the grounds, immense collaboration was required from all parties — a lot of sharing of information,” adds Lozano.

Super Challenges
After negotiations were complete, MRA ended with owning the 2.5-acre park space and an additional half-acre park space sandwiching Camden’s housing property. While the main park serves as a recreational and event space, the smaller park will also house a restaurant, water feature, artwork, and green space. “Camden specifically responded to the design of the park with the design of their building forming an ‘H’ and allowing for both park and downtown views,” says Lozano.

A challenge that proved surmountable was how to host a living, sustainable park above a below-grade parking garage. WPM structural and diagnostics engineers worked closely with parking engineers to design an operationally efficient garage while allowing the park’s trees to also grow and thrive. “Partnering with landscape architect Design Workshop, we planted large trees throughout the park that needed over five feet of clearance from the soil to the top of the structure to allow them to grow,” says Lozano. “As a remedy to this, we sloped the lid of the garage allowing for proper clearance for the grass blanketing the lawn space, and a greater distance to sustain the trees.” 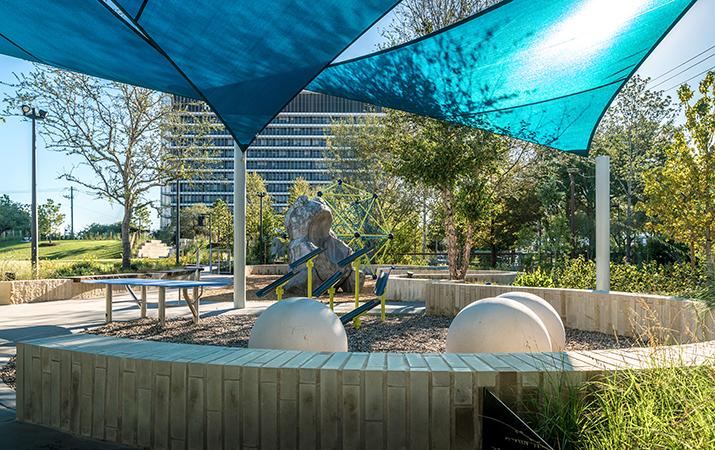 The 400-space parking facility lives virtually unnoticed below the Superblock space. An intricate system of under slab draining capabilities, robust waterproofing, pumps, and a rainwater vault not only serve to self-water the landscape but also prevented the garage from flooding during the historic Hurricane Harvey that destroyed many surrounding homes and underground structures. “Rainwater is collected through a piping system in the garage before it is pumped into a 70,000-gallon irrigation vault underground,” says Lozano. “The grounds are sustainable in that the rainwater is then used to water the lawn and planting areas.” The team planned for the impressive rainfall that often hits the Houston area and integrated a backup plan. “When the vault is full, the water bypasses to the water features which circulate and produce waterfalls under the bridges and areas for park-goers to relax on steps and dip their toes in the water,” he adds.

The Parking team at Walter P Moore not only ensured safety standards but went above the call. Additional lighting was added to the space to help drivers adjust when transitioning from below to above ground. “There are no hidden corners, people will feel extremely safe when entering and exiting the garage — that was important to us,” says Lozano. The “glass cube” was also incorporated; wrapping the stairs around the elevator to allow natural light to flow into the garage. Concrete was colored to mimic the pavers used throughout the park to not only create connectivity between the spaces but to also clearly identify high pedestrian areas. “Not only does the garage serve the park but we planned to welcome area commuters as well,” adds Lozano. 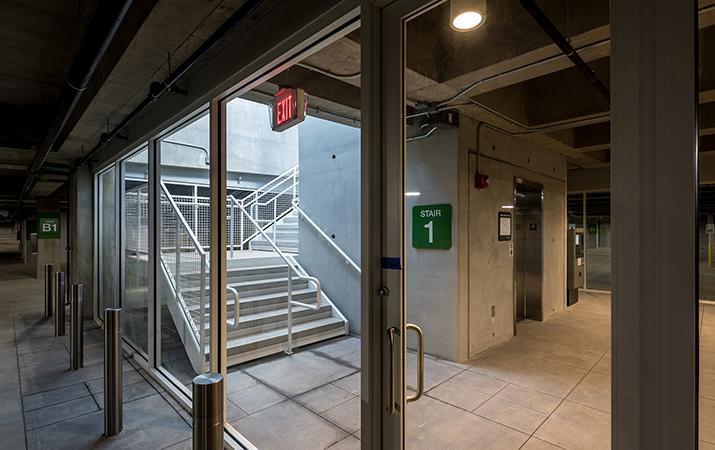 Fun Meets Functional
Bound by the “SuperBlock” of Main, McGowen, Travis, and Anita, Midtown Park is the answer for residents looking for a superior blend or urban living and functional green space. Running devotees, nature lovers, families, dog owners – and combinations of all of the above will find new things every visit to keep them busy. However, there are many educational and sustainable features interweaved into the fabric of the park’s design. “When we considered the audience that would be utilizing the space, we pictured young professionals living in the area, working in downtown,” says Lozano. “The first day the gates came down we saw urbanites in the park with their four-legged friends.”

All spaces of the park and garage were utilized to create a multifarious space that appeals to all brands of outdoor enthusiasts. The entrance to the parking garage is raised and angled to allow for height space. The slope of the entrance operates as a portion of the off-leash dog park and serves as a highly popular dog run. 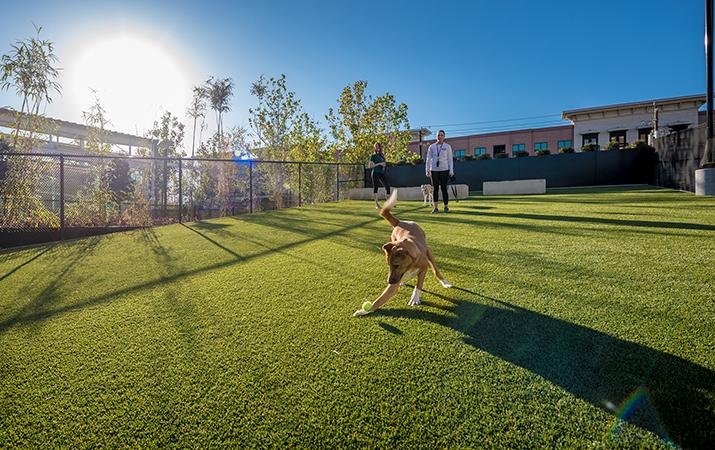 A nod to the “Bayou City,” nickname, the bayou landscape, and waterway serves as part of the stormwater infrastructure of the park, mimicking the recirculating system of natural bayous and wetlands nourishing species such as bald cypress, sweetgum, and red maples. The Camden Pavilion boasts a water feature that is as clear as glass when the program is off but also morphs into a replication of a rainstorm. “Jets shoot up through the water making it look like raindrops,” explains Lozano. “The intensity gradually increases and the lights within the feature and around the pavilion come on. It’s really quite mesmerizing to watch.”

The unique playground encourages exploration as well as energy-burning with climbing spheres, sound tubes, adult-size swings, and interactive pipe sections. The social games area provides a space for patrons to play bocce, washers, or other recreations surrounded by lush gardens.

In addition to the numerous water features and outdoor opportunities, the park also includes a pavilion and stage area. Elements are already in place to allow the park to host concerts, performances, exercise groups, and various other public events. “There is a designated space with plug-ins for food trucks and the width behind the stage intentionally allows vehicles to pull up behind it to unload equipment and such,” says Lozano. Tent anchors are also in the ground along the Promenade encouraging farmers markets, craft fairs, and other similar events to use Midtown as their host.

“Since the start of construction at Midtown Park, there have been six new private development projects announced within three blocks of the park,” says Marshall. “These ongoing, planned, or recently announced redevelopment projects include mixed-use residential/retail, multifamily residential, and office projects which will generate an estimated $338 million in new taxable value in Midtown.” From art walls to swing sets, Midtown Park answers the need for a flourishing greenspace in an urban area while maintaining a stunning backdrop of the downtown skyline. 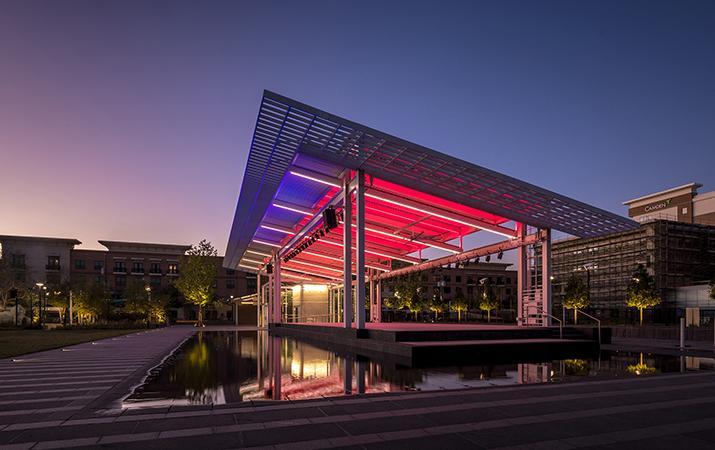