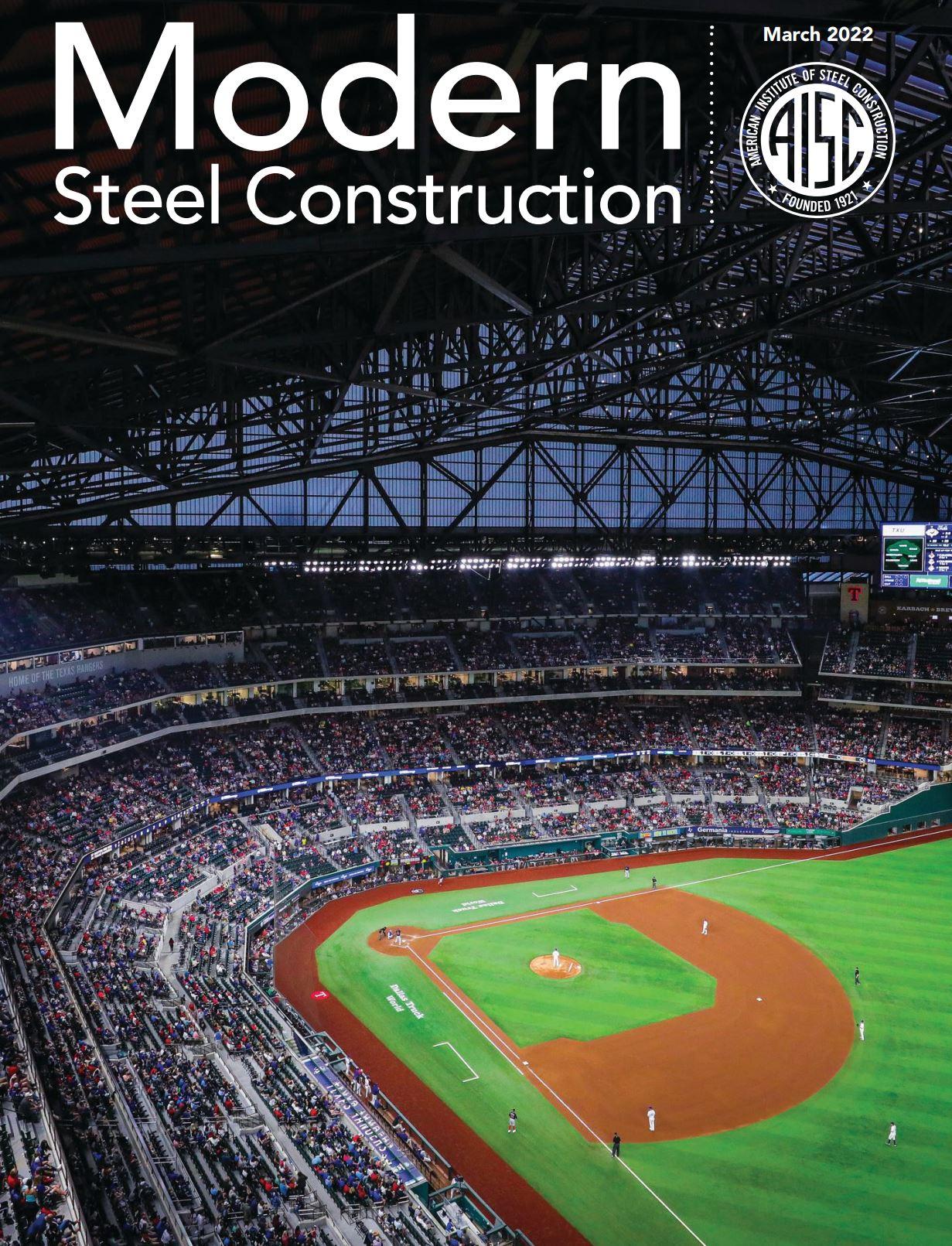 This article by Jeff Jansing originally appeared in the March 2022 issue of Modern Steel Construction.

Globe Life Field in Arlington, Texas, hit it out of the park in its first season as the new home of Major League Baseball’s Texas Rangers.

Due to COVID-19, the official opening of the multi-purpose venue was delayed as the MLB played a condensed schedule in 2020. However, the ballpark did host the 2020 World Series—the first neutral-site Series in MLB history—and the Rangers’ first full season in Globe Life Field followed in 2021.

With the 2022 MLB season right around the corner, the team is once again ready to welcome fans into its structural steel-framed, retractable roof-topped shrine to America’s pastime.

A number of factors were considered when it came to the park’s steel structural framing system. The greatest concerns were achieving the architectural vision, balancing cost efficiency, and meeting the accelerated project schedule—design began in early 2017— which required the ballpark to be completed in a mere 38 months.

“The steel erection was one of the driving factors for the overall project schedule,” said Greg McClure, senior vice president at Manhattan Construction. “Starting with the engineering review and throughout fabrication and erection of the structural steel members, priority and detail were exhibited by the design, engineering, and construction teams.”

Steel fabrication for the ballpark’s lower bowl started in March 2018, according to Bryan Irwin, vice president at Irwin Steel. The structure incorporates 34,000 tons of steel in all: 15,000 tons below the roof, for which Irwin Steel was responsible, and 19,000 for the retractable roof, which was fabricated and erected by W&W|AFCO Steel (WWAS) and W&W Steel Erectors (WWSE).

“The seating bowl steel was so critical to all other trades, especially the roof steel, that the schedule was determined before we began fabrication,” Irwin said. “It was our job to ensure we met the schedule deadlines.”

Site logistics also played a critical role in the project, especially when there were more than 130 ironworkers and six crawler cranes on the job site during the peak of steel erection for the bowl. The infield was used as a lay-down area for the bowl and roof steel and also to build sections of the roof trusses on the ground prior to lifting them into place. The various cranes were staged on the infield and around the exterior of the ballpark and were also employed for multiple other trades in addition to the steel. Therefore, communication between all members of the building team was critical.

Jeff Jansing, PE, is a principal and project manager at Walter P Moore. He can be reached at jjansing@walterpmoore.com.