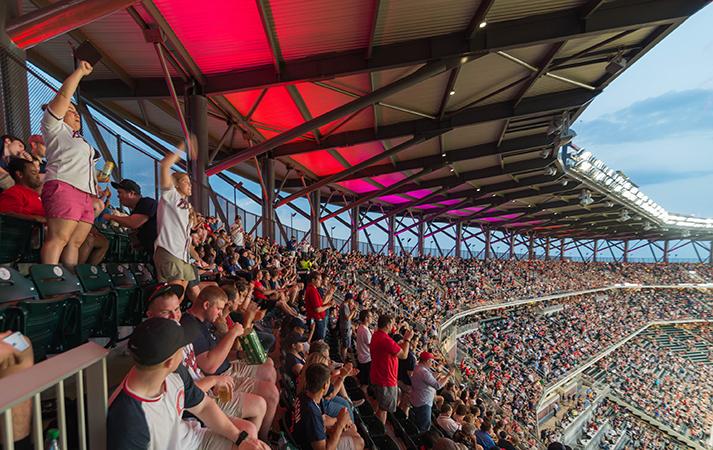 All 30 Major League Baseball teams will play today, which marks the 140th Opening Day and the earliest Opening Day in history (excluding international openers). The previous earliest opening day was March 29, 2018. Exhibition games played during spring training prior to Opening Day are ignored.

Just for fun (and because we love numbers and sports), we compiled a few stats, milestones, and fun facts about the big day and some of the MLB stadia that have hosted it:

Hooky Day  /  Opening Day is a state of mind as well, with countless baseball fans known to recognize this unofficial holiday as a good reason to call in sick at work or be truant from school (as most teams typically play their home opener in the afternoon).

Official Holiday?  /  Baseball fans consider Opening Day a holiday. Movements have been made — so far, unsuccessfully — to make Opening Day an official city holiday in Cincinnati.

We the People  /  In 2014, Hall of Famer Ozzie Smith, with the support of Anheuser-Busch, began a campaign using the We the People program to petition the U.S. government to make Opening Day an official national holiday.

Home Opener  /  A team's first game of the season on their home field.

Full Rosters  /  Teams' home openers serve as the only regular season games in which the entire rosters of both teams as well as coaches and clubhouse staff are introduced to the crowd prior to the games; for the rest of the year, ballparks only introduce the starting lineups (including the designated hitter in American League ballparks) and the team's manager.

Best Hitter  /  Ted Williams. The last man to hit .400 in a full-season, Williams was a .449 hitter in Opening Day games, with three home runs and 14 RBIs in 14 games. Williams had at least one hit in every Opening Day game he played.

Oldest Starting Pitcher  /  Nolan Ryan. In 1993, he was 46 years old when he toed the rubber for the Texas Rangers.

Most Home Runs  /  Frank Robinson. The Hall of Fame outfielder belted eight career home runs on the first day of the season. In addition to his record for most Opening Day homers, no other batter has equaled Robinson's feat of hitting Opening Day homers for four different teams.

1st (only) Hurricane-Ready Field / Marlins Park. Though Opening Day falls outside of Florida’s typical hurricane season, Marlins Park is the first and only retractable roof stadium designed to be partially open, or in “hurricane position” during major storm events.