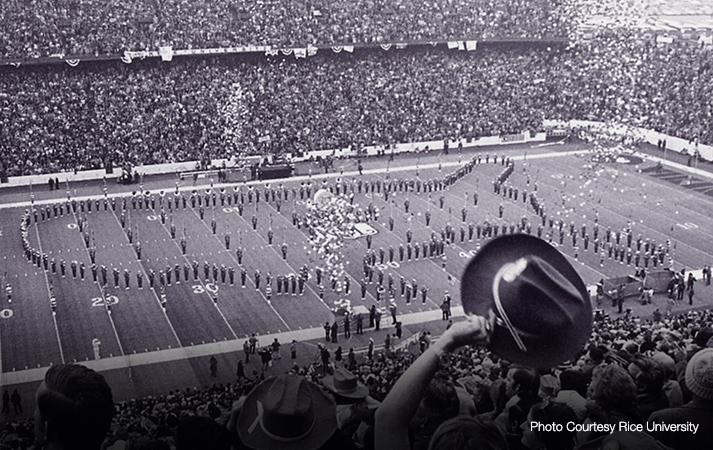 When the New England Patriots and Atlanta Falcons take the field Sunday at Super Bowl LI in NRG Stadium, the event will mark the eighth Super Bowl since 2001, and the ninth overall, to be hosted in a stadium engineered by Walter P Moore. It will also mark Houston’s third time to host the Super Bowl.

Where was the first?
Rice Stadium — opened on September 30, 1950 — was Walter P Moore’s first sports project and also hosted Houston’s first Super Bowl. In 1974, Super Bowl VIII was held at Rice Stadium, where over 71,000 spectators watched the Miami Dolphins beat the Minnesota Vikings, 24-7.

The Making of a ‘Super’ Stadium
In November of 1949, with Rice just crowned as champion of the Southwest Conference, Rice University’s board of trustees announced plans to build a 50,000-seat stadium that would be ready for college football season the following year. Houstonians watched with equal parts skepticism and amazement as they debated whether it would make its debut on time. Local builder Brown & Root, architects Lloyd & Morgan and Milton McGinty, and structural engineer Walter P Moore immediately rose to the challenge, committing to design and construct the stadium at cost, and to work day and night to ensure the stadium was ready on opening day.

Walter P Moore’s first true design-build project broke ground on January 3, 1950. During construction, the seating capacity was increased to 70,000 and the running track circling the field was eliminated from the original design to bring the fans closer to the action. Rice Stadium thus became the first major collegiate stadium built without the customary track, giving it better sightlines and fan intimacy that still make it a great place to watch a game. 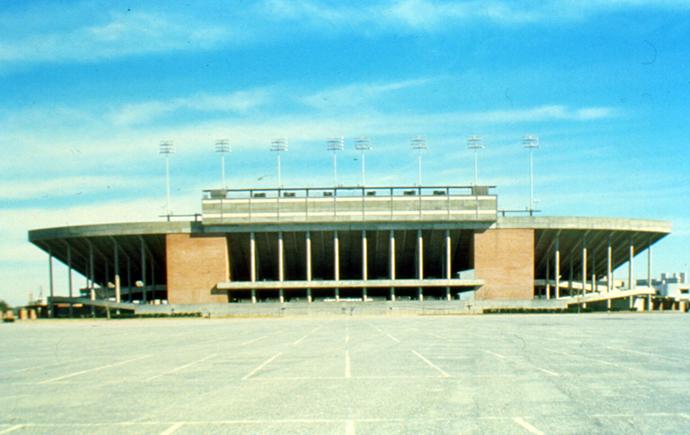 The slender, graceful perimeter columns, a trademark of the stadium’s iconic façade, earned our firm’s founder, Walter P. Moore, Sr. some initial criticism from the engineering community over their extreme slenderness. It was his ingenuity, extreme attention to detail, and reverence for efficiency that accomplished this seemingly unfeasible design aesthetic. The structure — slender columns and all — has clearly withstood the test of time.

Although the scoreboards were still being installed just hours before game time, the stadium opened on schedule and saw Rice defeat Santa Clara, 27-7. Years later in 1962, Rice Stadium was the setting for President John F. Kennedy’s famous speech challenging Americans to pursue the moon, and has since become a historical and architectural jewel on Houston’s skyline.

Today, 67 years after its opening, Rice Stadium remains a tribute to teamwork and ingenuity, both in design and construction, and it continues to expand its capacity for both the athletes and fans alike. Last year, the Brian Patterson Sports Performance Center, a football operations building featuring a weight room, locker rooms, and coaches offices, opened in the north end zone of the stadium, and design has already begun on upgrades to the west stands and press box. As the structural engineer for both projects and for numerous assessment and repair efforts over the years, Walter P Moore continues to serve as a proud steward of the history and tradition of Rice Stadium.

Fun Fact: All living Rice graduates could still be seated in Rice Stadium.

Why did a university with just 2,500 undergraduates need a 70,000-seat stadium? Key games routinely drew large crowds, generally selling out when Rice hosted rivals UT and TAMU during the heyday of the Southwest Conference.