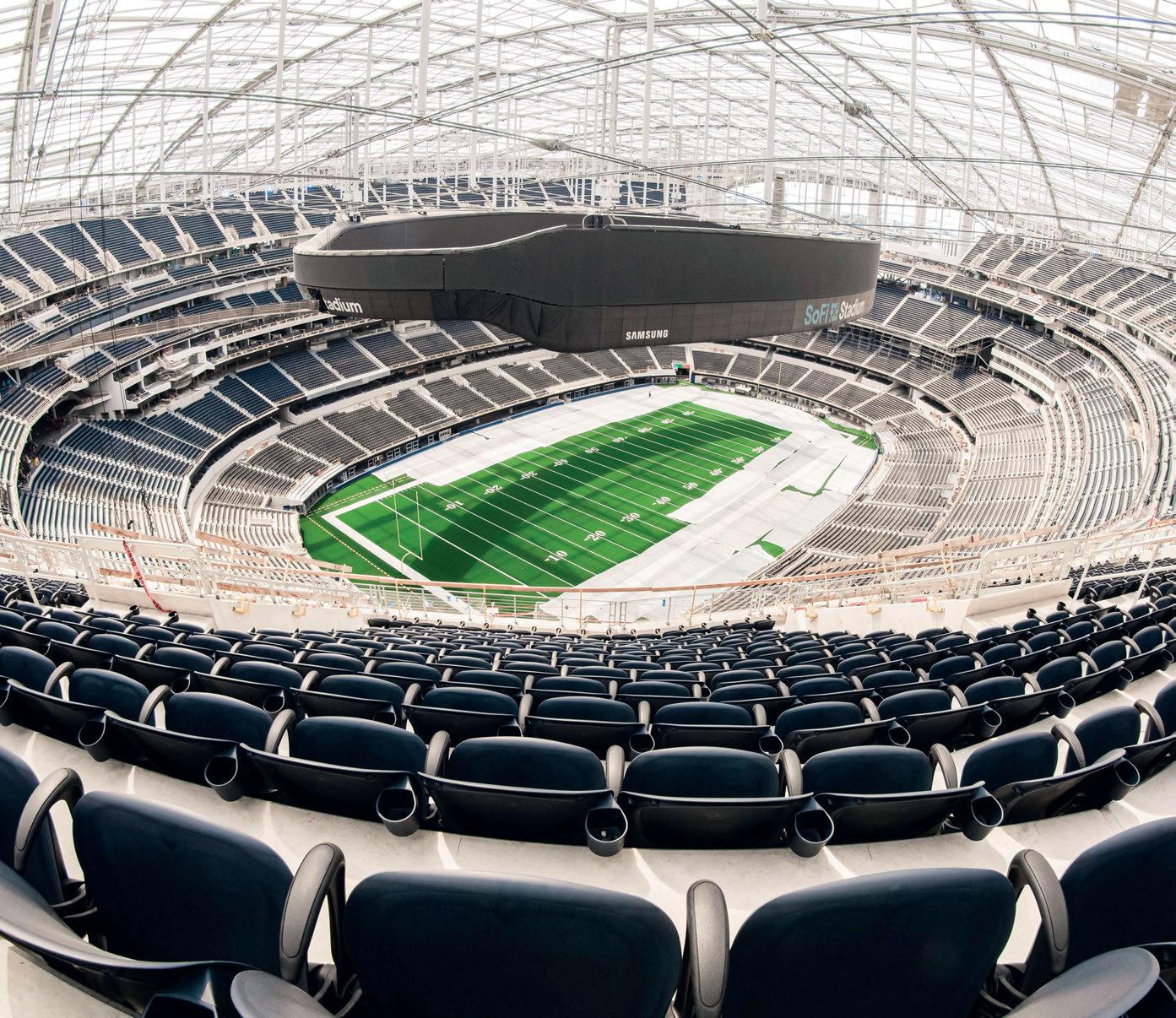 SoFi Stadium, located inside the brand-new Hollywood Park in Inglewood, California, is the newest large-scale, stand-out venue to be constructed in the US. The state-of-the-art home of the Los Angeles Rams and the Los Angeles Chargers will be the largest indoor-outdoor stadium in the NFL at 3.1 million sq. ft., and will be the centerpiece of the world-class sports and entertainment destination being built by Los Angeles Rams Owner and Chairman, E. Stanley Kroenke.

Featured in the August-September 2020 issue of Mondo | Stadia, MooreExperts lend an insider's view of the making of the high-performance venue.

Structural engineers, Walter P Moore, worked on the structural and enclosure engineering at SoFi Stadium. With a long history of close collaboration with HKS Architects, especially on innovative designs in the sporting sector, Walter P Moore was present from the very early stages of SoFi Stadium’s design. “As Principal in Charge, one of my responsibilities was to handpick the subject matter experts capable of taking this design idea and driving it to the finish line where we are today. With so many details to pay attention to, we had to stay focussed on the bigger picture - achieving the overall vision for the project set by Los Angeles Rams Owner/Chairman E. Stanley Kroenke. We had a great collaborative and accountable team on the project,” explained Mashari Nassar, Senior Principal and Director of Client Strategy at Walter P Moore.

Bart Miller, Principal and Senior Project Manager at Walter P Moore, and also National Sports Market Leader on the project, furthered: “Walter P Moore specialises in the delivery of large, complex sports venues, and draws from our extensive portfolio of recent and relevant projects to ensure we’re leveraging the most current technologies and trends in the market. We work as a global team, leveraging firmwide expertise, and industry-recognised subject matter expertise to apply best design practices and lessons learned from the earliest stages of the design process. We’ve also developed design tools and planning and management processes that allow us to tackle these projects efficiently and with reduced risk to our clients.”

The team at Walter P Moore solved complex technical problems at the stadium with a graceful structural system that melded into HKS’ architectural vision. Early design charrettes were key in developing structural systems that supported Mr. Kroenke’s project vision, while considering numerous other factors, such as structural efficiency and constructability. Mark Waggoner, Walter P Moore Principal and Lead Roof Designer, explained further: “There were five guiding principles: Firstly, structurally separate the roof from the bowl structure to allow each to respond independently under seismic forces; then, support the roof outside the excavation to limit column height and enable concurrent construction of the roof and the bowl. We also had to ensure the venue provided for excellent seismic performance and used lightweight roof systems to reduce seismic mass. Most importantly, we had to support the design vision of Mr. Kroenke by achieving all of these goals with a graceful structure.”