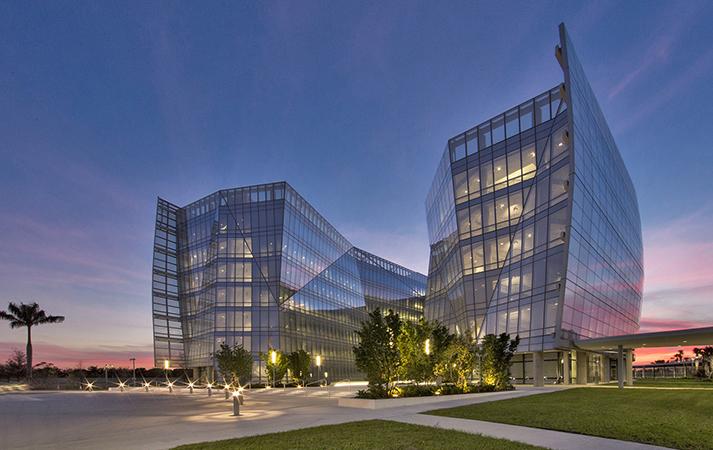 DBIA’s Project of the Year — the Benjamin P. Grogan and Jerry L. Dove Federal Building — is a testament to the viability of design-build as a delivery method for complex projects and the winner of five National Design-Build Project/Team Awards in total. As a project excelling in multiple aspects, the Federal Building also earned Excellence in Category (Federal, County, State, Municipal), the Excellence in Process, and Excellence in Design (Architecture) Awards. The building, which operates as a Federal Bureau of Investigation (FBI) campus, was delivered on time and on budget, providing the owner with an iconic structure capable of withstanding security threats while respecting the natural Florida landscape.

“The Benjamin P. Grogan & Jerry L. Dove Federal Building is a great example of Design-Build Done Right™. Despite change orders that would have added four months to the substantial completion date, the project was delivered on schedule due to the collaboration between team members that design-build allows. This prestigious distinction is well-earned and we could not be more excited to award the entire project team with DBIA’s 2015 Design-Build Project of the Year.” — Lisa Washington, CAE, DBIA’s Executive Director/CEO

About the Awards
DBIA is the premier organization that defines, teaches, and promotes design-build best practices. Recognized for exemplary collaboration and integration in design-build project delivery, the award-winning projects were evaluated by a distinguished panel of industry experts. This year, 26 projects in 10 categories were awarded National Awards of Merit. One project in each of the 10 categories was then considered for best-in-category as a National Award of Excellence winner along with Excellence in Design (Architecture), Excellence in Design (Engineering), Excellence in Process and Excellence in Teaming awards, and Project of the Year. The 2015 selected projects showcase design-build best practices, in addition to achieving budget and schedule goals and exceeding owner expectations.