Allianz Field: How Collaboration and Round HSS Led to an Iconic Stadium

Allianz Field: How Collaboration and Round HSS Led to an Iconic Stadium 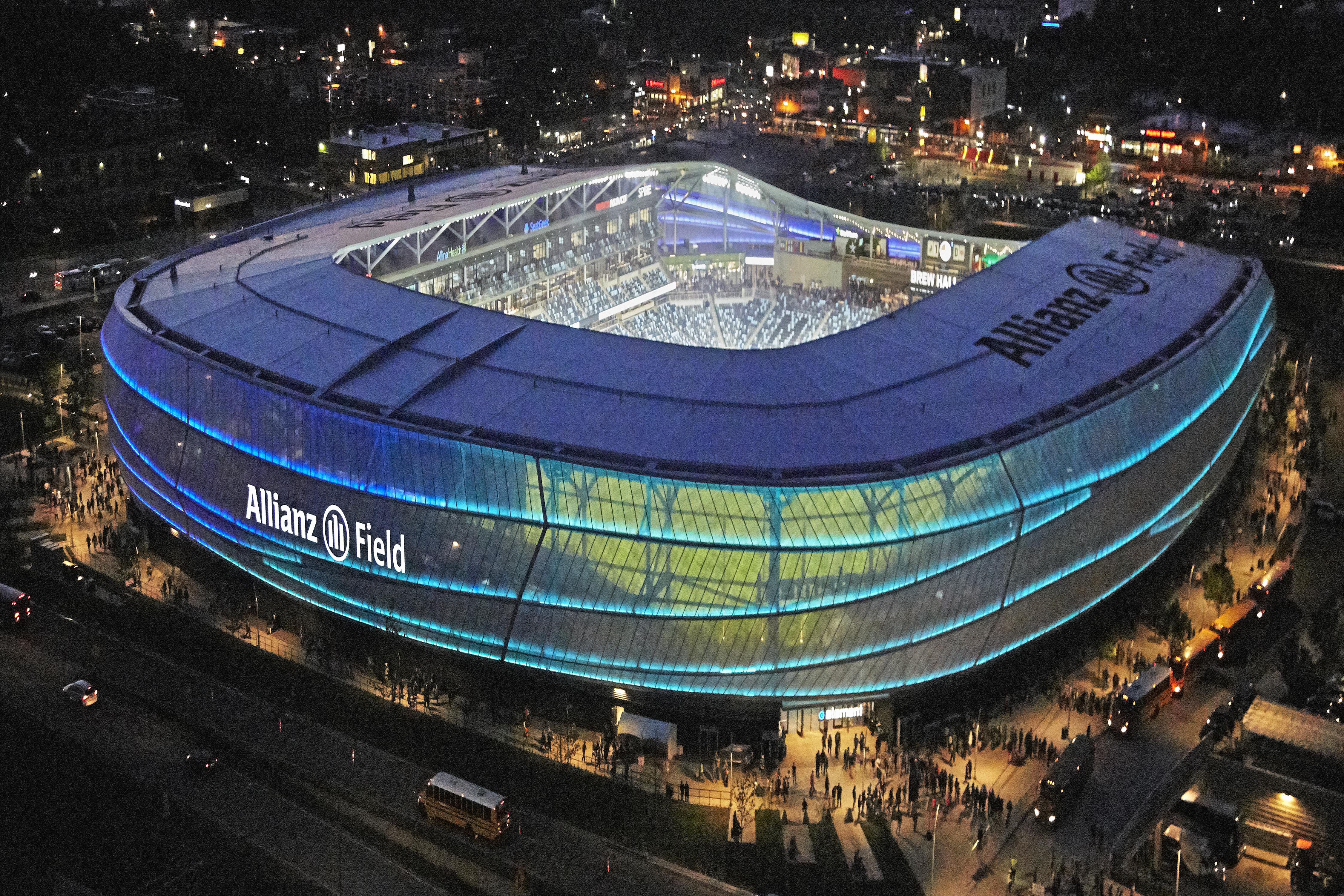 Known for its stunning 360-degree canopy and PTFE skin, Allianz Field serves as home to the Minnesota United FC soccer team. Whether attendants are enjoying an intimate 125-foot sideline seat or taking in the sweeping architecture, it’s clear this building is a structural design, engineering and construction success. We’re joined by Justin Barton, principal and senior project manager at Walter P Moore, to discuss the details of this extraordinary feat and how collaboration between teams led to its completion.

Q: Can you introduce yourself and tell us more about your current professional role?

A: My name is Justin Barton. I’m currently a principal and senior project manager at Walter P Moore in our Kansas City office. I started at Walter P Moore in 2005, working out of Atlanta. I’ve been with the firm my entire career, and I love working here. It’s a great company with great people.

One of the first monumental projects I worked on was Target Field in Minneapolis, Minnesota. It opened in 2010, then the Allianz Field project happened just across the river in St. Paul. I was working with a lot of the same people as the Target Field project, which had its benefits. We were working with people who already knew one another and had built up trust and knowledge of how each of us worked and our capabilities.

In addition to his roles as principal and senior project manager, Barton leads the sports community of practice at Walter P Moore — an internal focus group that discusses best practices, lessons learned and consistent high-level delivery for sports projects.

Q: Can you tell us more about your involvement with the Allianz Field project, which was the recipient of the 2022 AISC IDEAS2 national award?

A: I was our project manager for the Allianz Field project. Walter P Moore did structural engineering for all the beams, columns, footings and canopy. Also, we completed the enclosure engineering, which mainly consisted of the laminated PTFE fabric you see all around the building that gives it that iconic appearance.

Barton and the Walter P Moore team were involved in some of the early concept designs with the architect Populous. The team also worked with the owner, Minnesota United, to help put the structure together — literally and figuratively — in line with the vision they had for the project. 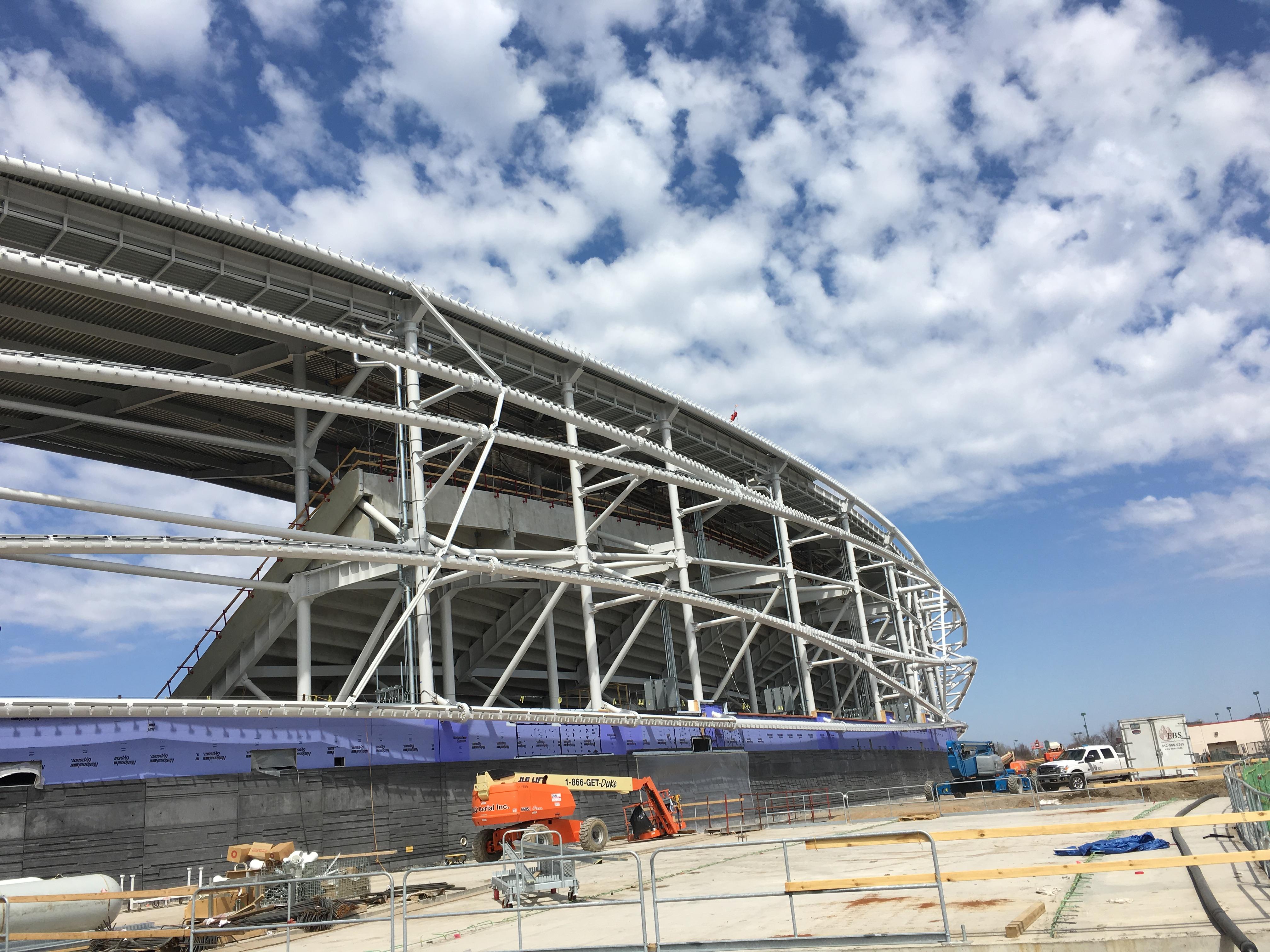 Q: Just looking at the stadium, HSS plays a significant role in structural support for almost all portions of the design. The exterior fabric support, canopy cantilever support and lateral bracing all appear to be supported by HSS. Why was HSS chosen for this project?

A: For the building columns, the architect really liked that smooth circular look. From a structural standpoint, the round shapes are good in axial capacity, so they’re not going to buckle like a wide flange column typically does. We were able to get some longer unbraced lengths out of the columns for not much of a weight premium than we would have compared to some other systems.

Barton says that since the field is in Minnesota, there is a significant snow load on the struts that support the canopy. Since the struts will be under almost constant pure compression, the round shape is ideal for members under that load.

The exterior skin is the iconic feature of the stadium. It’s a tension fabric that’s clamped and supported at intermediate pipes. Because of that, all the exterior support members are taking loads in two directions. There is wind load that hits the pipes out of plane. Also, the fabric is like a bedsheet that spans between different driver pipes. So, when it pushes or pulls that bedsheet, it pulls down and to the side where it connects to those intermediate support members. Having a round shape with a capacity for bending loads in both directions was ideal.

Barton continues to express that HSS allowed for the curvature the owner and client desired. Internally, the team began referring to the cladding support members as driver pipes because they drove the overall geometry of the exterior skin. Teams had a shared center line file that was used both from an architectural and structural standpoint, then ultimately used on the fabrication side so that the team could control the geometry precisely to support the exterior skin.

Q: Can you describe your experience with the design and construction teams? How did collaboration influence the success of the project?

This approach to working collaboratively early on helped propel the team and project forward. They looked for solutions rather than just identifying problems. The team, having already built a foundation of trust, focused on overcoming potential issues together. A shared digital platform for driver pipe geometry between the architectural, design and construction teams is one of many examples of how the collaborative process led to success.

The fabric could only span so many feet without being overstressed. It could stretch top to middle or middle to middle or middle to bottom. We had to adjust that to make sure there was no overstressing but still provided a good architectural look. Having a common platform, Rhino, to discuss these adjustments meant we could make multiple iterations a day and collaborate in real time as opposed to potentially waiting multiple days for an email response.

Q: Were there any surprising ways HSS was able to contribute to this project?

Barton says he doesn’t think other options — such as a square shape — would have worked and the team would have to slice and dice either shape to get the fabric to lay properly.

A: Knowing that we were going to have a tension membrane around the outside of the building that was going to be putting load into the cladding support members in two directions was critical. We needed to be able to take in that load from different directions and bend the X-axis and Y-axis of the members, which wasn’t always even a pure X and Y but a combination of those different things and a corkscrew effect going around the perimeter. So that round shape truly met all the needs we were looking for.

Q: How was the curvature of the HSS accomplished? Did this require coordination with the fabricator? How were tolerances addressed?

A: One thing we did work to ensure was that each HSS was only bent in one direction. If you put a compound curve on any member, the cost goes up and the ability to maintain that curve in both directions gets complicated. Between point A and point B, we had just one curve line along the length of that member, and then the next member had a shared endpoint and a single radius.

So, while virtually every HSS on the job had a different radius, it still was always just the single radius. That was critical to being able to help the fabricators and contractors see that while it looks complex, it’s actually a series of fairly simple pieces built together to make something that looks incredible.

Q: What was the design approach for the HSS connections? Were the connection loads primarily axial and shear or were there moment connections as well?

Barton continues that instead of having large deflections or positive bending between supports, the team was able to create a negative curvature to control the deflections within the pipes.

Q: The entire perimeter of the stadium has continuous steel HSS driver pipes. How was thermal expansion load accounted for in these connections?

A: It was difficult. We spent a lot of time discussing thermal expansion load since driver pipes go all the way around the stadium. They act like a giant rubber band. In the summer, they heat up and want to expand. In the winter, they shrink and contract. The architect’s desire was not to have any expansion joints in the building skin around the perimeter. Our approach was to design the pipes for that buildup of thermal stresses. There’s a lot of axial load in those pipes, particularly in the corners, for that reason. That’s why we have larger end plate connections, too.

Q: Were there any issues with HSS wall thickness found during connection design or was this accounted for ahead of time?

A: As a firm, we use HSS members a lot, so we know to start with thicker walls. There were a few spots where we might have had to locally address this, but we had started with thicker wall members for connection design.

Q: With this project, you’ve achieved a goal that the Steel Tube Institute promotes. Is there anything else about this project you’d like to share with our readers?

A: When I think about Allianz Field, the word “collaboration” comes to mind. The owner had a big vision for the project and developed trust in the design and construction teams to bring that to life.

One of the owner’s desires was to bring that European mentality of soccer stadiums to the United States. This is the first Allianz Field-branded arena here in North America. They have many venues throughout the world, and a lot of them have a signature exterior cladding system. To be able to pull that off here in North America for the first time was significant. I grew up playing soccer, so to now be part of one of the most iconic soccer stadiums in the country is a really fulfilling experience.