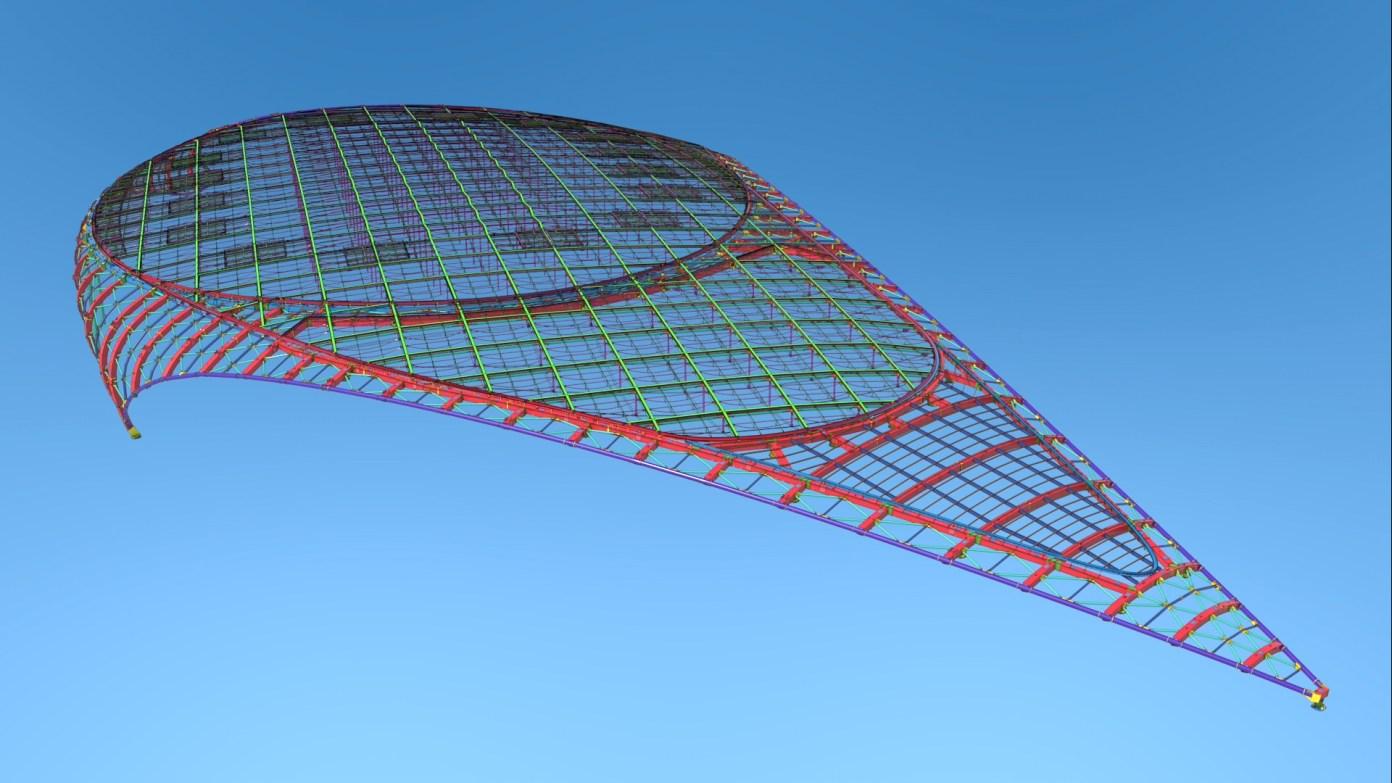 Originally published in the March 2022 issue of Civil + Structural Engineer

The project’s roof design required a plated boxed compression ring with large bi-directional tensioned cables that crossed high above the field below and supported the stadium’s 2.2 million-pound circular video screen.

DBM Vircon and Schuff Steel worked closely with the project’s structural engineer of record, Walter P Moore to account for deflection and ensure the roof could structurally respond to seismic forces independently of the bowl structure. Walter P Moore worked entirely in 3D, using a shared Tekla model created by DBM Vircon. “The compression ring at the inner edge of the roof had a series of very complicated connections,” said Mark Waggoner, principal and lead roof designer at Walter P Moore. “We modeled the connections and created our drawings from the Tekla model. At the same time, we provided the portion of the model with those complex connections to DBM Vircon to plug into their model as they populated the rest of the connections on the project. Pretty much everything we did lived in the Tekla model in one way or the other.”

Waggoner credits this continuous flow of data with eliminating the chance for error. “There’s basically no possibility for misinterpreting the data when we keep it in the model from the very early stages of design and share the same data with the detailer and fabricator, Schuff Steel, throughout the connection modeling and fabrication process,” he said. “It’s this continuity of data that makes us confident that nothing will go wrong, especially with a geometrically complex project like SoFi Stadium.”

Walter P Moore also modeled the structure to support the stadium’s video screen, a dual-sided, center hung 70,000 square foot digital LED display. “The support was woven into the roof and cable net design,” said Waggoner. “A series of modular trusses were prefabricated and brought to the site where they were stacked on the playing field. The cable net was complete so we used strand jacks to lift the display 32 feet off the ground until the cladding and electrical work were finished and the display could be lifted to its permanent home 122 feet above the field.”