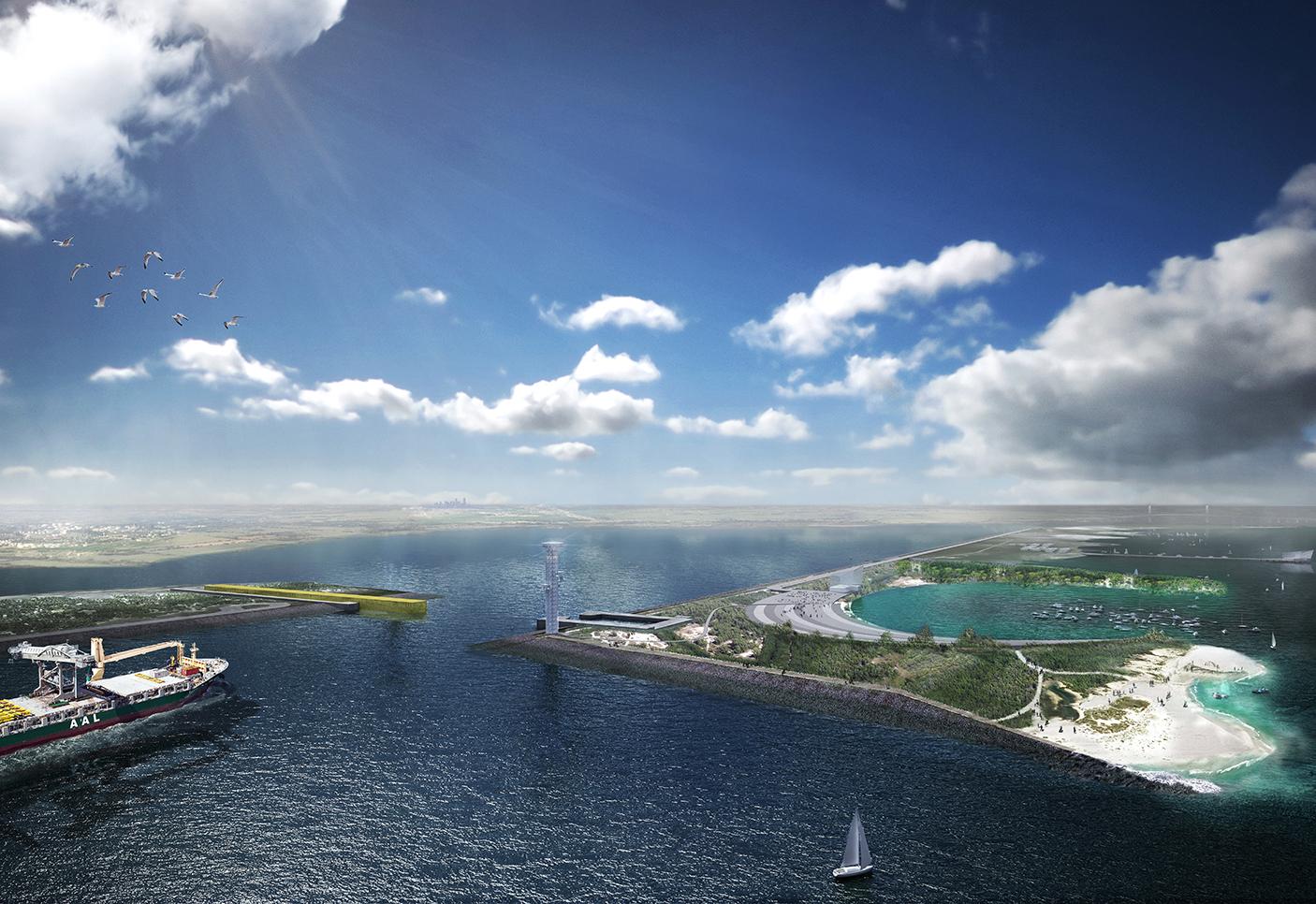 Solutions that provide everyday benefits are unique in the world of flood protection. Typically, these solutions only earn their worth during a storm event. However, the solutions that we tend to forget are those that when they are not protecting against flooding, are providing other benefits. Flood control reservoirs provide recreation and a great place to have a summer house, as well as water supply and habitat for plants and animals—generally year-round benefits. These benefits are part of what makes Galveston Bay Park stand apart.

Originally conceived as a bay barrier to protect against the surge threat from hurricanes, this idea also provides cost-effective ship channel dredge placement, an agent to help clean and protect water quality in the bay, a habitat for migrating birds and sea life, public beach and recreation area, and as economic development. The uses have the opportunity to generate the funds necessary to cover the cost of maintenance of the barrier and potentially the cost of construction.

The idea was generated after Hurricane Ike created a surge in Galveston and Galveston Bay not seen since the early 1900s. It was a wakeup call that new ideas were needed to protect the bay and the people and industries that line it from a major catastrophe. The Severe Storm Prediction, Education, & Evacuation from Disasters Center (SSPEED) was established by Dr. Philip Bedient at Rice University to address the threats made evident by Ike. Funded by the State of Texas General Land Office, the Houston Endowment, and The Kinder Institute, the Center has engaged in finding solutions for the various vulnerabilities made evident by storms starting with Katrina and Rita, and then closer to home by Ike. The SSPEED Center is supported by numerous regional universities and private industries providing research to address the threats facing the region.

Galveston Bay Park is an idea that started with the SSPEED Center and has been widely recognized as the types of solutions that need to be developed to address the threats of future storms while providing many other significant benefits. The opportunity that the project can be done relatively quickly, potentially be funded locally, and can help pay for itself is unique in mega projects. The fact that it has been 12 years since Ike and nothing has been done to provide protection, makes the decision to move forward a priority.

The project is the result of a team of researchers that established the location and the technical elements of the barrier. Walter P Moore joined the team to help provide technical and planning support. Numerous trips to visit Dutch experts at TU Delft and see how the barriers have been designed and constructed added to the knowledge and vision of the barrier. When Rob Rogers of Rogers Partners Architects joined the team and added his imagination with renderings depicting the ideas developed for the barrier, the real value of the project became much more visible and obvious to comprehend. From this international collaboration, the Galveston Bay Park concept was born. 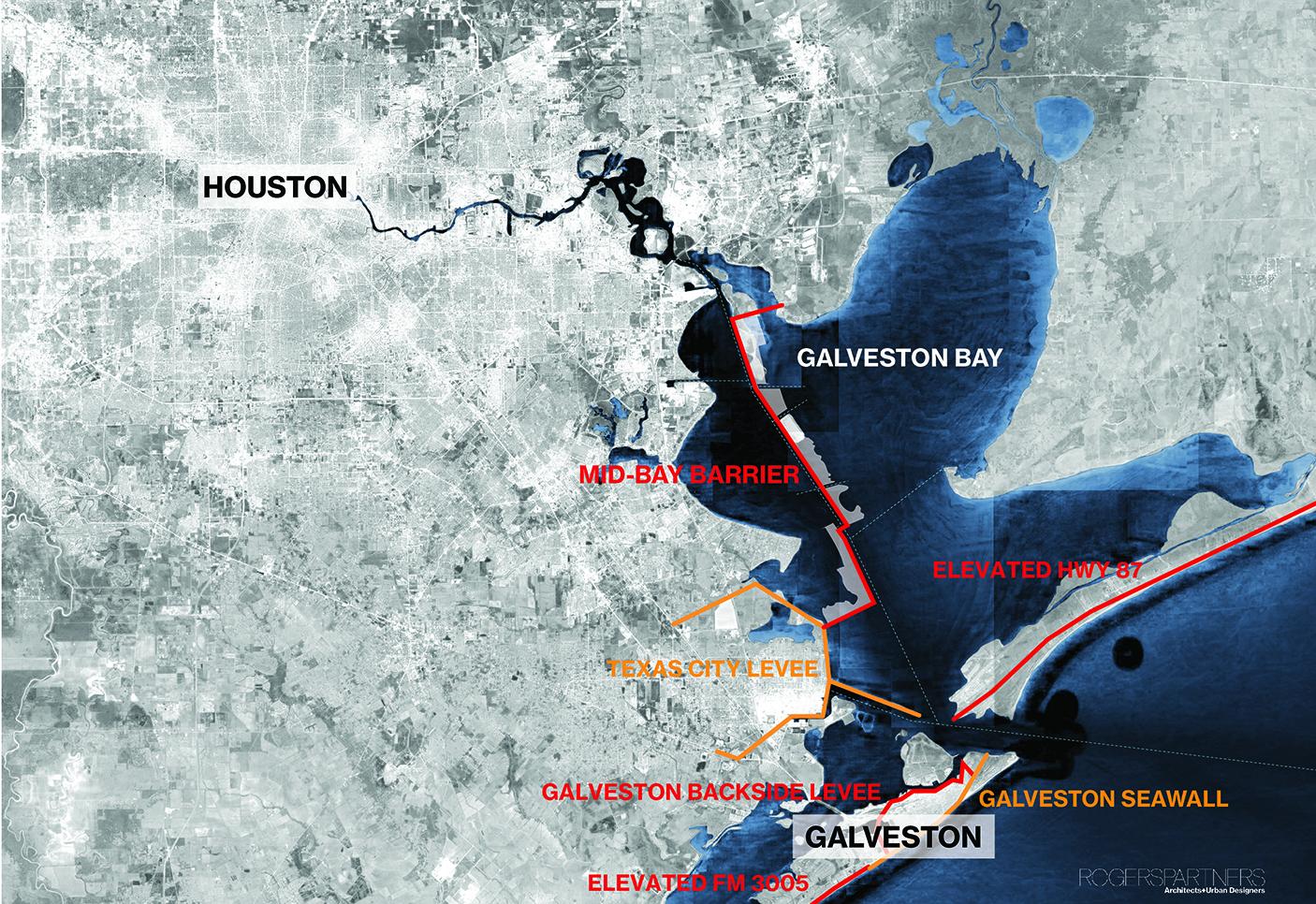 The Galveston Bay Park Plan (GBPP) is an in-bay barrier 25 feet above sea level that extends from near Houston Point in Chamber County just below Cedar Bayou along the east side of the Houston Ship Channel to a point across from San Leon just north of where the Trinity Cut ship channel intersects the Houston Ship Channel. A proposed gate structure similar in scope to the famous Maeslant Barrier in Rotterdam is proposed to span the Houston Ship Channel at that point and then the barrier would extend southward along the west side of the channel and then tie into the Texas City Dike. Five additional gates along the barrier where existing channels have been cut would allow for the passage of recreational craft and drainage to pass through the barrier.

The proposed barrier is to be constructed from dredge material that would facilitate the additional widening of the Houston Ship Channel from the recently approved widening to 700 feet to get to the desired width of 900 feet. This widening would make currently dangerous ship traffic within the channel much safer and would help facilitate larger container vessels into Barbour’s Cut Terminal and Baytown. The barrier will also double as a dredge material containment area which will later be transformed into recreation areas that can support recreational leases for seasonal use for birdwatching, fishing, swimming, and other open park use. The plan would mitigate impacted oyster reefs replacing them with much larger reefs. Additionally, the plan would create new coastal wetlands and marshes to help add to the habitat and help clean the water in the bay.

The studies conducted by SSPEED and the USACE have identified that the coastal spine barrier alone will not prevent bay surge waves that would result from a major hurricane only slightly stronger than Ike, a category 2 storm when it made landfall, resulting in major damages along the west and north side of the bay. The mid-bay barrier formed by the GBPP would protect against the residual surge formed in the bay.

Prosperous Future
The GBPP is one part of an overall Galveston Bay plan that includes the Coastal Spine barrier that the US Army Corps of Engineers (USACE) is currently fostering through the environmental impact studies phase to create the seaside barrier along Galveston Island and Bolivar Peninsula. Found to be compatible with the USACE plan, GBPP would be able to replace the planned improvements along the west side of the bay, saving that project an estimated $2billion and it would not have the impact on private and commercial properties that are part of the USACE plan. 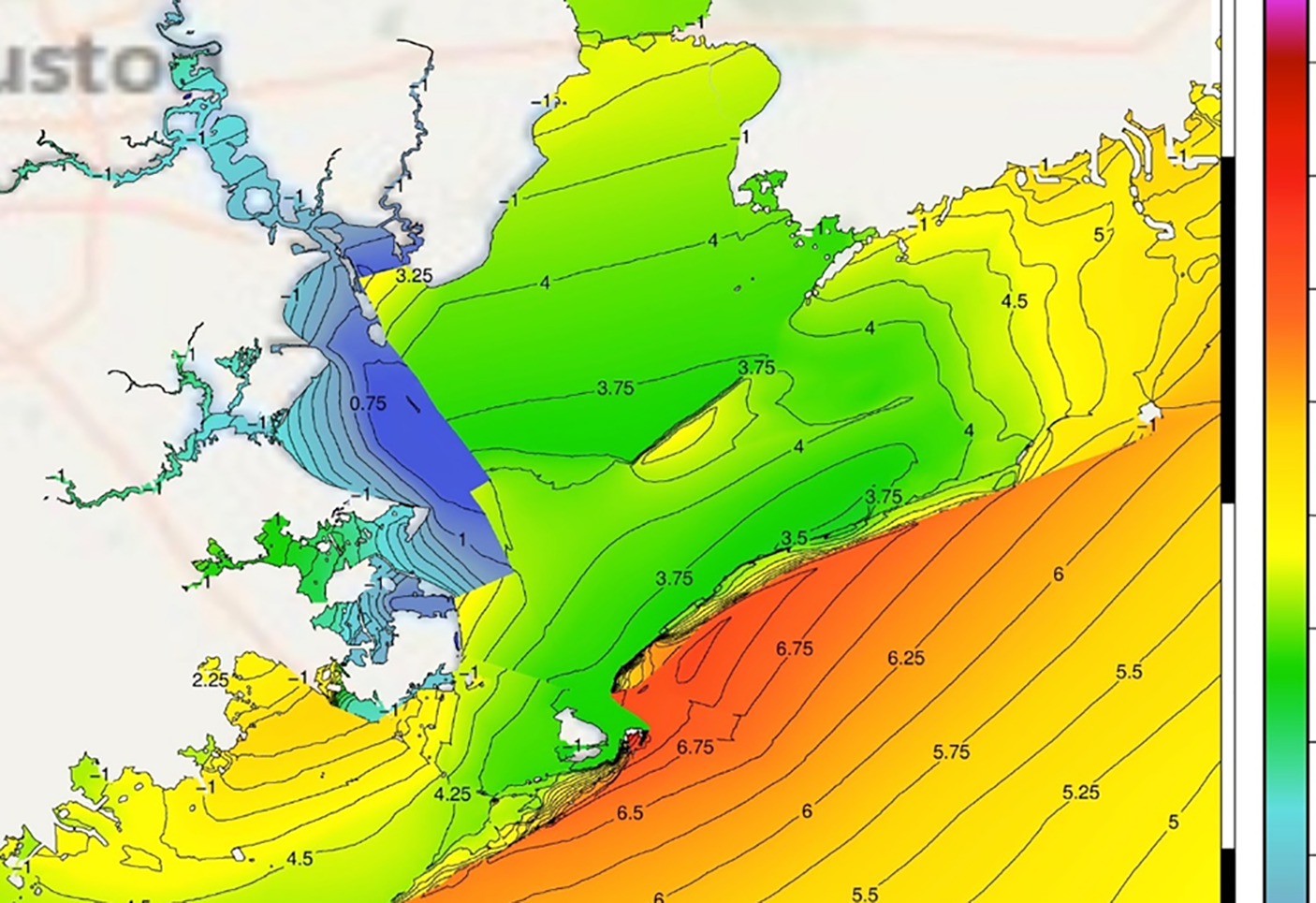 There have been key points in history where the actions taken have greatly formed the future of a region. Jesse Jones led an action to create the Houston Ship Channel after the 1900 Hurricane pointed out the vulnerability of the port at Galveston. As the ship channel opened, the Panama Canal also opened and oil was discovered at Spindletop. The result of these three events greatly impacted the region’s future. This is another such opportunity to protect the Houston Galveston region and provide the safety needed to protect one of the nation’s most important contributors to the nation’s wealth and stability. By making this a reality, other opportunities based on job creation, economic stability, and the other changes that are impacting the world as we know it can help to determine a prosperous future for the region.