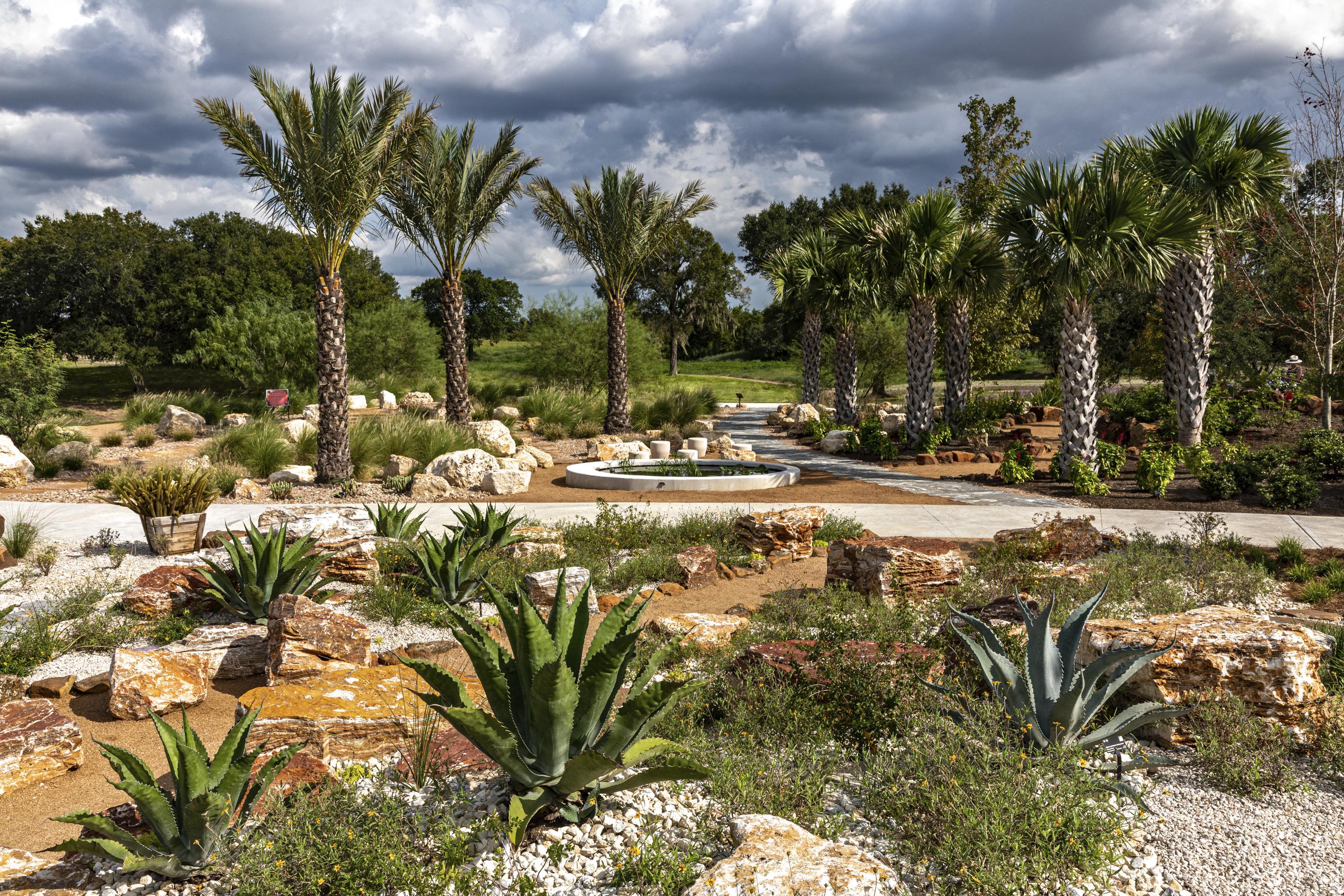 Houston has long been a hub for visionary ideas in medicine, energy, manufacturing, and aeronautics.

That same forward-thinking spirit inspired a group of Houstonians to work for more than 30 years to bring to their city a botanic garden like those they had witnessed firsthand having a positive impact in communities around the globe.

By January 2015, that long-held vision became a reality when the Houston City Council unanimously approved a long-term lease agreement and partnership with the Houston Botanic Garden to transform the former Glenbrook Golf Course into a world-class garden.

“They had a desire that Houston join in the growing interest in botanic gardens and add to the city’s ecosystem of cultural institutions by creating a world-class garden in Houston,” says Claudia Gee Vassar, president and general counsel at the Houston Botanic Garden.

Located near Hobby Airport, Houston Botanic Garden offers easy accessibility to the greater Houston region and the opportunity to develop the garden around the Sims Bayou in an area with little investment in green spaces or cultural amenities.

“The influence and integration of the bayou in the Garden allows visitors to understand these beautiful waterways that are integral to the resiliency of the Bayou City,” Vassar says.

The 132-acre Houston Botanic Garden is also a long-term investment in Houston tourism and a benchmark for city’s revitalization of its green spaces.

“It is a fantastic addition to the Houston area and one that will bring joy and serenity to future generations,” says Houston Mayor Sylvester Turner.

Addressing Design Challenges
The Sims Bayou channel runs through the middle of the Houston Botanic Garden dividing it into two separate areas—the Island and the South Gardens. Because the site was a former golf course on an island off Sims Bayou, many of the project’s challenges involved balancing the desire to maintain the existing tree canopy while constructing the landscape and structures of a botanic garden.

“We strategically designed the layout and systems to avoid as many existing obstacles as possible,” says Donna Bridgeman, senior landscape architect at West 8.

Walter P Moore was involved in the initial site review and served on the building team that created the $100 million master plan for the Houston Botanic Garden. Construction on Phase I of that master plan—which incorporated existing natural features and elements to mitigate potential flooding—was completed in fall 2020.

“Walter P Moore was instrumental in spearheading the challenges of permitting a multiphase project while leading the design of challenging structural, grading, and drainage systems,” Bridgeman says. 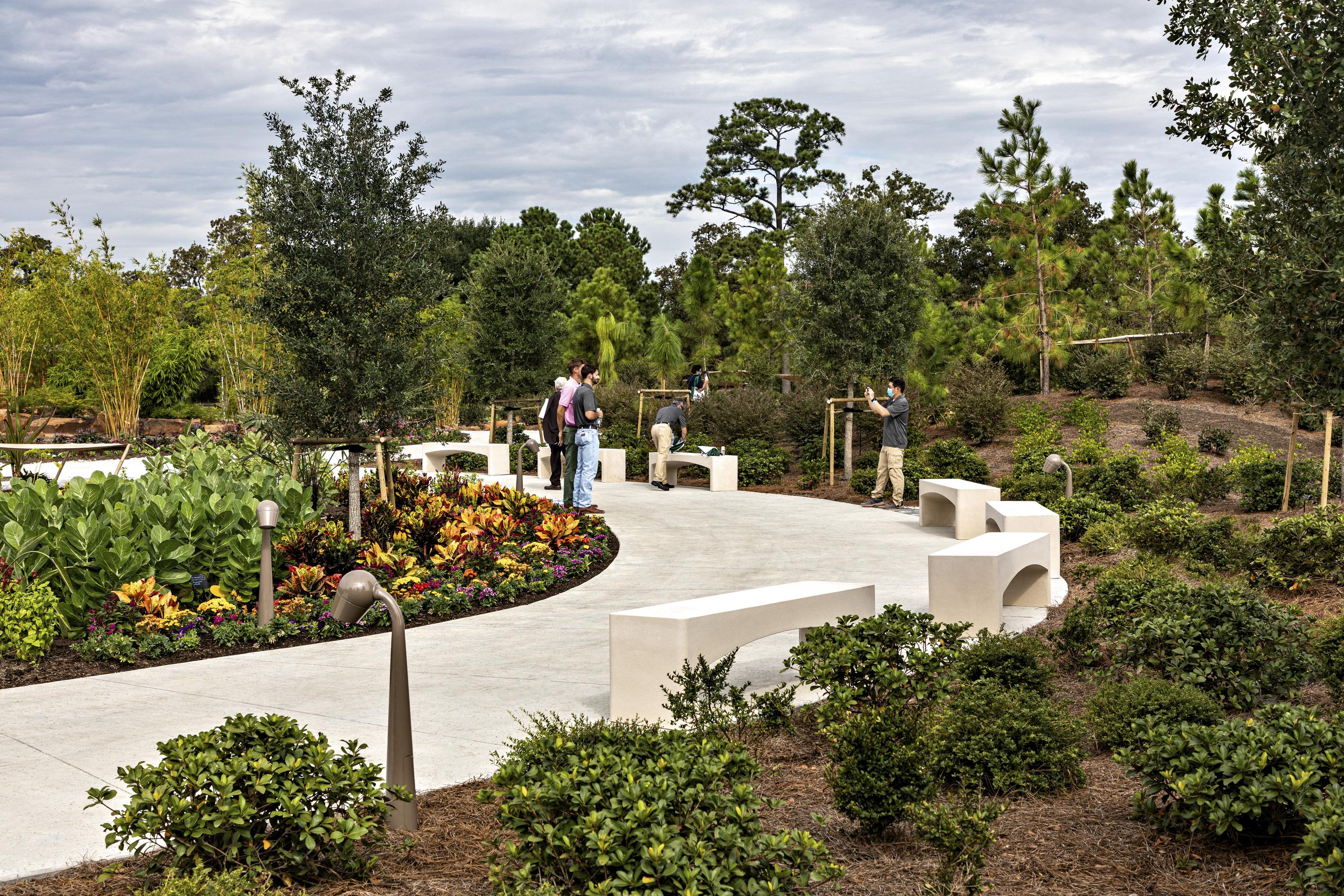 Detention and Drainage
To develop the property, which encompasses an area of Sims Bayou and includes the floodway as well as 100- and 500-year floodplains, permitting required coordination with the U.S. Army Corps of Engineers, the Harris County Flood Control District, and the City of Houston. During the design phase, in response to Hurricane Harvey, the city changed the detention and floodplain mitigation criteria for any development within city limits, which required additional coordination with the Houston Public Works Department on the project.

“The permitting process of this project was at the time when Houston was about to update their detention and floodplain requirement,” says Chong Wei Ooi, senior associate at Walter P Moore.

As a result, the new detention and floodplain volume mitigation were incorporated into the project’s master plan. The floodplain mitigation on the site was designed as the Coastal Prairie, which is a major ecosystem of the Houston region, to handle the inundation of stormwater during major rain events. Additionally, a detention pond serves as a Stormwater Wetlands exhibit using the permanent body of water to allow for planting of aquatic plants.

Valuing Conservation
Knowing the importance of water to the Garden as a valuable natural resource, an additional riser structure was designed for the children’s lagoon. A small aquatic garden surrounds the lagoon, which is separated into two sections. The riser structure is hidden underneath a decomposed granite pathway—the only portions visible are the screen and the concrete top of the structure.

Conservation goals also had an impact on how the floodplain was constructed. The Garden required excess soil material to be reused elsewhere on the project. To accomplish this, Walter P Moore used Civil3D to do multiple design iterations of the entire project. As a result, excess material was limited to approximately 2,000 cubic yards of earthwork, which was recycled in the Global Collection Garden.

In another example of the Garden’s commitment to conservation, designs accommodated existing trees on-site and developed strict criteria for working around them.

“We had to work equipment strategically around the tree protection fence to ensure we did not damage the existing trees on the site,” says Carolina Hernandez, project manager at Harvey Builders.

The trees are a significant and stunning part of the entry drive and provide shade in Picnic Grove. The landscaping designs highlighted the proper spacing from these trees so they could continue to thrive and flourish in a new setting. The designs contained no grading around the trees, creating a design problem because of all the landscaping additions and a preference for adjacent areas with higher elevations. The result is a blend of new and existing flora and fauna. 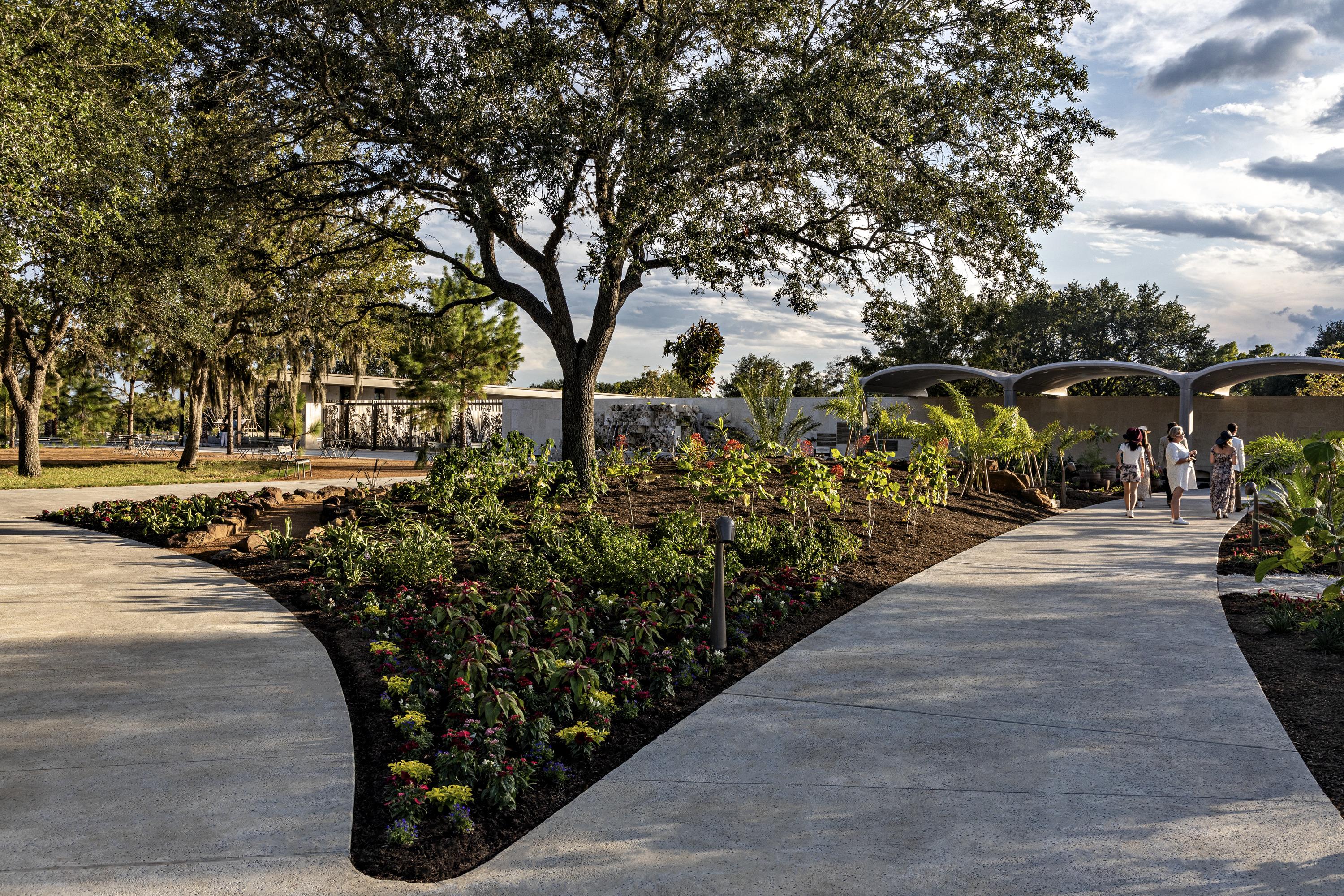 Bridge Design and Maintenance
Because the site included the original Sims Bayou meander and newer channelized bayou cutting through it, connectivity across the bayou provided a unique challenge to the building team in creating access to and throughout the garden.

As part of the site review, five pedestrian bridges were evaluated for structural integrity. Improvements were recommended to extend the life span of the existing bridges. Some of the issues included deterioration from deferred maintenance, incomplete existing bridge drawings and documentation, and scour.

Ultimately, a new entry bridge was designed and constructed to cross the Sims Bayou meander and allows vehicle, bicycle, and pedestrian access from Park Place Boulevard to the Island.

To accommodate the bridge, areas at both ends were filled to raise the approach elevation achieving the required floodplain clearance from the city and Harris County Flood Control District.

The low chord elevation is 25.65 feet above sea level and approximately two feet above the 100-year flood event. “The City of Houston provides minimum freeboard requirements so new bridges do not block stream flow during flood stages or flood events.”

The raised approaches to the new bridge resulted in an additional prairie area just beyond the entry garden, featuring native coastal grasses and plants that can tolerate occasional inundation.

Positive Reaction
At the onset of this project, the goal was to give Houstonians another serene setting where they could enjoy nature and experience the physical and emotional health benefits of spending time outdoors.

Since opening its doors the Houston Botanic Garden has admitted more than 24,000 ticketed visitors and continues to welcome first-time and returning guests every day.

“For being the first botanic garden in Houston, the reaction from the public has been overwhelmingly positive, especially during a global pandemic,” Turner says.