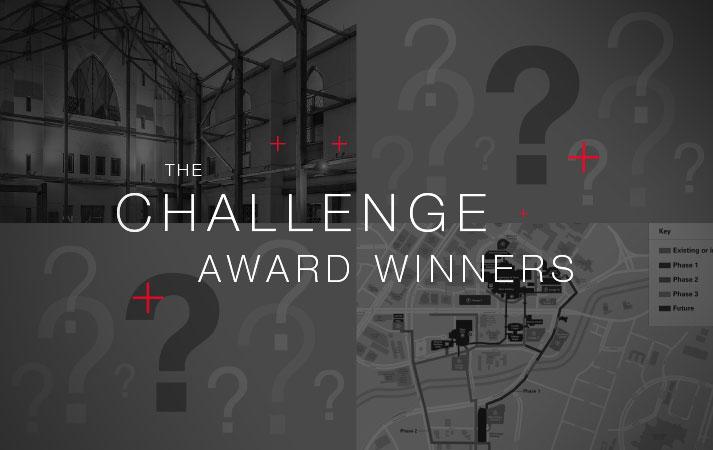 About the Awards
Walter P Moore congratulates our (first) four teams of Challenge Award winners! Started this year, the Challenge Awards were established internally and are held quarterly to recognize teams and/or individuals for outstanding performance in demonstrating some or all of the 5 Coordinates that define our “Driven by the Challenge” culture.

Submissions are open to all business units and corporate groups within Walter P Moore, with up to four teams/individuals awarded each quarter. Each award has both a cash and a charity component, with the charity being chosen by the winning team. To date, charity organizations have included United Way, Engineers Without Borders, Habitat for Humanity, local food banks, and local ACE Mentoring Programs. However, each group is allowed to choose their own charity organization recipient.

About the Winners
Although there were four projects chosen for Challenge Awards this quarter, two of these projects are confidential, so we are only able to share the stories of two projects with you for now.

Bethel Park in Houston, Texas, is a unique restoration effort that preserves the history and architecture of Bethel Missionary Baptist Church and provides a new park in the city’s fourth ward. Constructed by former slaves, the church was designed by James M. Thomas, a noted architect of African-American churches. Although a 2005 fire destroyed much of the church’s interior, the 1923 and 1950 exterior masonry walls were salvaged by creative strengthening and restoration techniques.

Though faced with several challenges, the design team opted to preserve the walls in place and leave them exposed to maintain the church’s historical integrity. The heavily damaged, unreinforced masonry walls posed an immediate public safety hazard that required an emergency response by the design team before any assessment or restoration work could proceed. Additionally, the design team had to devise a strengthening approach that would resist the hurricane-force winds prevalent in the region while maintaining the original aesthetics of the church walls.

Walter P Moore provided prime services — anchored by Civil and Traffic Engineering — for the MD Anderson Cancer Center (MDACC) Campus Telecommunications Master Plan, which included overseeing the design and construction of over 18,000 linear feet of fiber optic duct bank to provide data / telecommunication connectivity between its five distinct campuses. The Master Plan provides for data/communication infrastructure that will assist with their current operations and allow for potential growth of up to 20 years.

MD Anderson Cancer Center is the largest institution in the Texas Medical Center (TMC), spread between 5 different distinct campuses just within the TMC. Interconnectivity is critical to their operations. The team faced several challenges such as providing routing down a congested Fannin and crossing Brays Bayou. The bayou was crossed in three separate locations, one by dipping below the bayou and the other two spanning over the bayou.