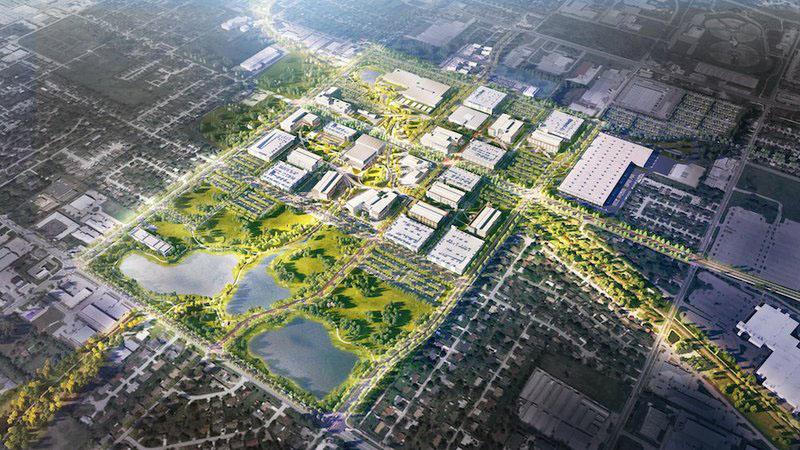 The new Walmart Home Office campus will occupy approximately 350 acres in the heart of Bentonville, Arkansas, and includes more than 30 buildings including office buildings, service buildings, parking decks, and amenity buildings. The project officially broke ground in 2019 and is currently being constructed in several phases.

Sustainability is a leading driver behind the campus design. Highlights of Walmart’s sustainability efforts on their new home office include regionally sourced materials for mass timber construction, energy-efficient lighting and HVAC, and 10+ acres of lakes for stormwater collection for smart irrigation and rainwater reuse. The Walmart campus will also feature thousands of trees, shrubs, and grasses to provide habitat for wildlife, shade paths and bike trails, and reconnect associates with nature.

Walmart’s new headquarters are designed with their associates and community in mind. The design includes buildings with ample natural light, expanded food offerings, convenient parking, fitness and wellness options, and a childcare facility, all within a modern, fully connected campus.

The project was divided into five construction zones—with Zone 2 divided into north and south to better control the construction phasing. The utility package spanned all five zones, which essentially make up the entire 350-acre campus, which is equivalent to 265 football fields. Each zone included multiple utility laterals, or service connections, which are the connections from the main trunk line utility mains to each building. 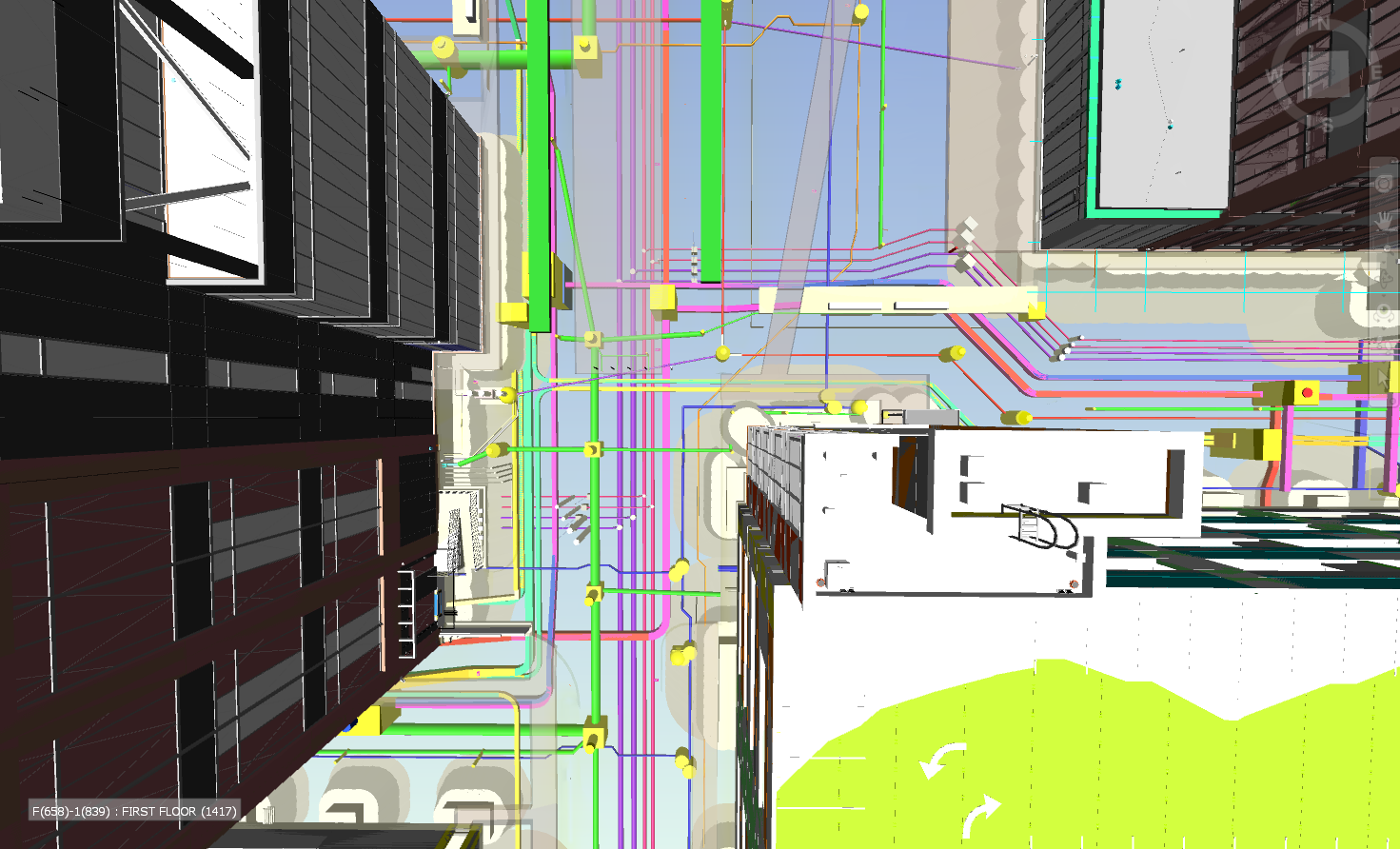 Numerous miles of pipe and ductbank have been intricately woven throughout the entire campus to avoid clashing and to adapt to the changing grades of each zone.

Walter P Moore’s initial construction package began with the installation of the major underground utilities due to the greater constraints in regard to the complexity of routing the extensive system of utilities within specified corridors. The hydronic utilities were designed first because they require a more consistent elevation to minimize the distribution piping pressure drops. Sanitary and storm sewer were the next utilities designed because they are gravity-fed lines with varying slope requirements which limits the flexibility of depth where they can be routed. Electrical, fiber optic cable, and communication utilities followed, which are constrained by a set amount of vertical or horizontal bends allowed between structures. Finally, water and gas were installed last because they can be more easily adjusted to maneuver through and around the previously described utilities.

One of the first challenges for the Walter P Moore team involved the resolution of clashing of major underground utilities and maintaining cover through the various phases of work because the utilities were designed before the final grading of each zone and the micro (surface) drainage—the optimized drainage system around the developed zones—were finalized. The grading of each zone was adjusted after the mass grading of the site and as the development components started for each zone. The micro drainage included the fine-tuning of the sizes and location of drainage pipes in each zone as the surface grading for each zone was finalized. The drainage adjustments included roof drain connections, landscape inlets, and bollard drain connections. Additionally, the team had to address, and avoid where possible, conflicts between the utilities and the rock layer that was evident and varied in elevation throughout the campus. It was especially difficult for the contractor to excavate through the rock in order to place utilities. In some instances, it was unavoidable, and special measures were taken to blast through the rock to accommodate the utilities.

The Walter P Moore team is currently working with the general contractor and their subconsultants to identify conflicts, determine phasing, and meet with the trenching and excavation team to understand construction sequencing with impacted design and utility sections. The firm is also working with the installation team on an ongoing basis for real time field changes to ensure there are no impacts to future utilities still being designed.

From the onset of the design for the 350-acre campus, regular clash detection sessions were held for the utilities using Navisworks’ Clash Detector. By using the software, the utility design team, and the zone teams, were able to compare one, or multiple utilities, to find the minimum clearance tolerances in the complex weave of utilities. The clash rules, which were established for minimum clearances as required by the City of Bentonville, Arkansas Department of Health, and best management practices were set at certain distances per the specific utility. For example, there must be a minimum of 18-in. of clearance when a water line is crossing over or under a wastewater line.

Concurrently, the geopiers—a ground improvement method that prestresses soil using soil replacement or displacement technology to strengthen soft soil with piers of aggregate—required careful coordination to adjust point of connections at the buildings and avoid their zones of influence. The zones of influence involve a cone of compacted soil around each pier that cannot be disturbed because it would compromise the integrity of the pier. Ultimately, the footprint of each cone was quite large, and they ended up clashing into each other forming a solid zone of influence that could not be crossed. However, the Walter P Moore team was able to carefully coordinate with the building design consultants and the geopier consultant for all the utility points and their interactions with the zones of influence. This was accomplished by raising the laterals over the geopiers and/or lowering the elevation of geopiers. Some utilities were shifted to avoid the zone of influence, while others were left as is with the understanding that the geopiers would be constructed around the utility which would allow for difficult or no future access to this portion of the utility. 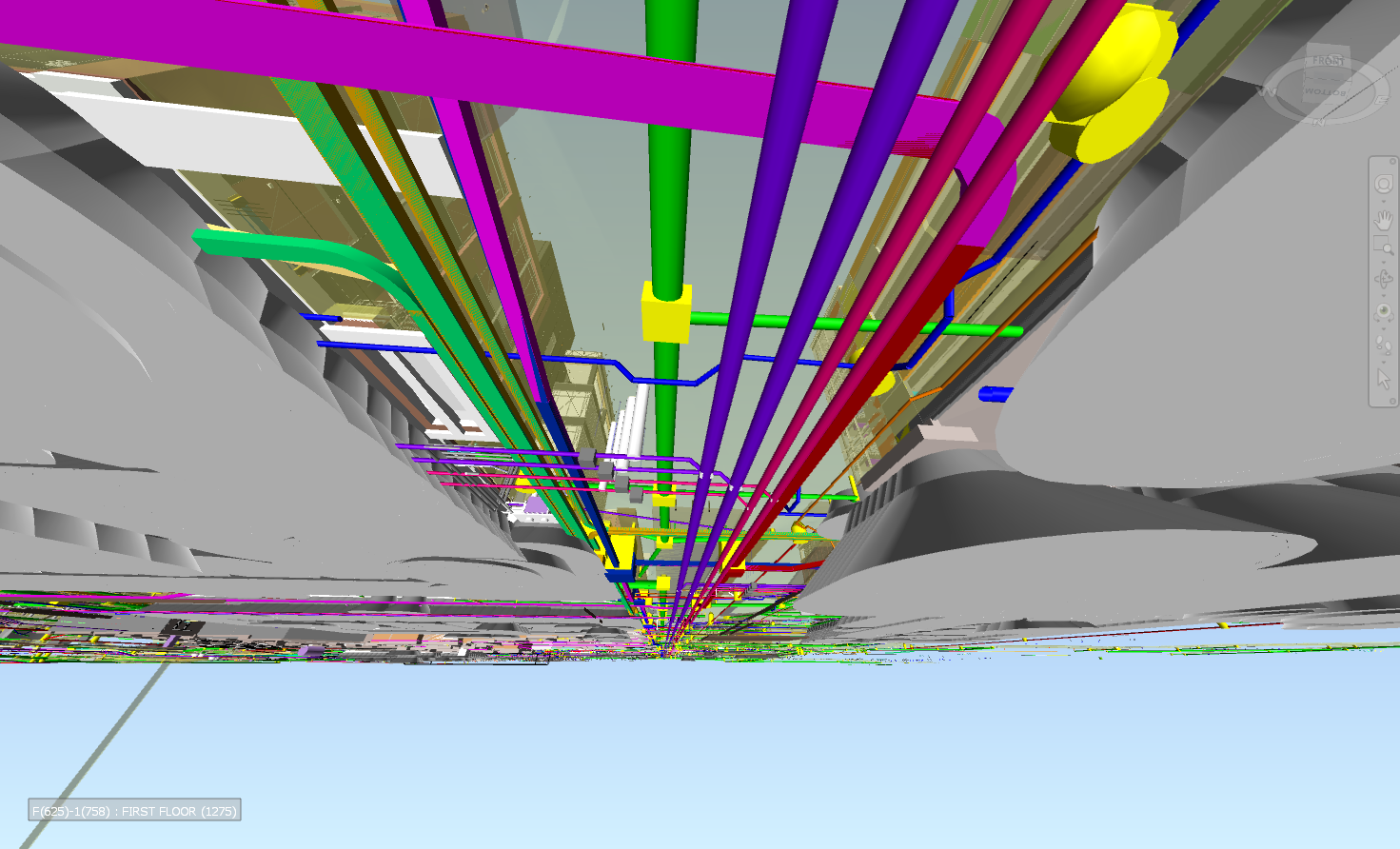 Furthermore, ongoing utility adjustments were made as the project site and building design progressed. For example, horizontal and vertical clearance between utilities varied and had to be maintained as they were adjusted on a weekly basis because each zone was in a different phase of design and installation. When Zone 1 was completed, Zone 2N received updated building layouts and the utilities had to be rerouted. The utilities were rerouted around the updated building, which required additional conflict checks.

At the epicenter of the ever-fluid utility design for the campus was Autodesk’s Cloud Collaboration—formerly known as BIM 360—which was used throughout the design to facilitate coordination between the design teams and contractors. Cloud Collaboration is the new platform for collaboration between design consultant teams and project-related disciplines, and it is expected to become the required alliance platform for construction projects in the future. As a result, it was the first time Walter P Moore had ever used the platform for a civil infrastructure project.

Using Cloud Collaboration, design changes and issues were caught and fixed more rapidly, with minimum effect on the overall design process. Furthermore, the design and construction documentation can live in the same place as the project files. This includes, but is not limited to, RFI’s, material lists, punch lists, and more.

For the project, Walter P Moore primarily used Cloud Collaboration as a file transfer platform. It allows users to view project models, which were the basis of the construction model, from within the program because it has the ability to read more than 83 file types. The design team using Cloud Collaboration can also view, markup, and collaborate design intent.

Due to the complexity of the campus utility design, Navisworks’ Clash Detection was used to identify clashes. The utility design team and each zone team were tasked with running clash detection and provided reports on a regular basis.

All of the clashes for the campus design were run as hard clashes to provide more accuracy when managing the operation. Any clashes identified were then discussed during the scheduled weekly design and zone team meetings. Because the clashes occur after a clash detection is run in the program, the design team had the option of marking the clash with either: New, Active, Resolved, Approved, or Resolved.

The clash reports were then generated with a thumbnail view as well as a brief report about each clash. To ensure all clashes were addressed and resolved, special internal meetings were scheduled if the conflict was considered critical to design and/or construction.

For example, the Walter P Moore team would gather all the clash reports in Zone 1 and notify the zone project manager. The team would then determine which utility should be adjusted. If the adjustment involved coordination with landscaping, this would be discussed during the zone team’s weekly meeting. Concurrently, the contractor also ran their own clash reports and discussed their results during a weekly model coordination meeting.

Overall site management and planning using Civil 3D and Revit were also critical components to the campus. Walter P Moore established the shared coordinates on the project site, which were set on a right-of-way line, and then exported to an XML file for the other design team consultants to use as it related to their project scope. 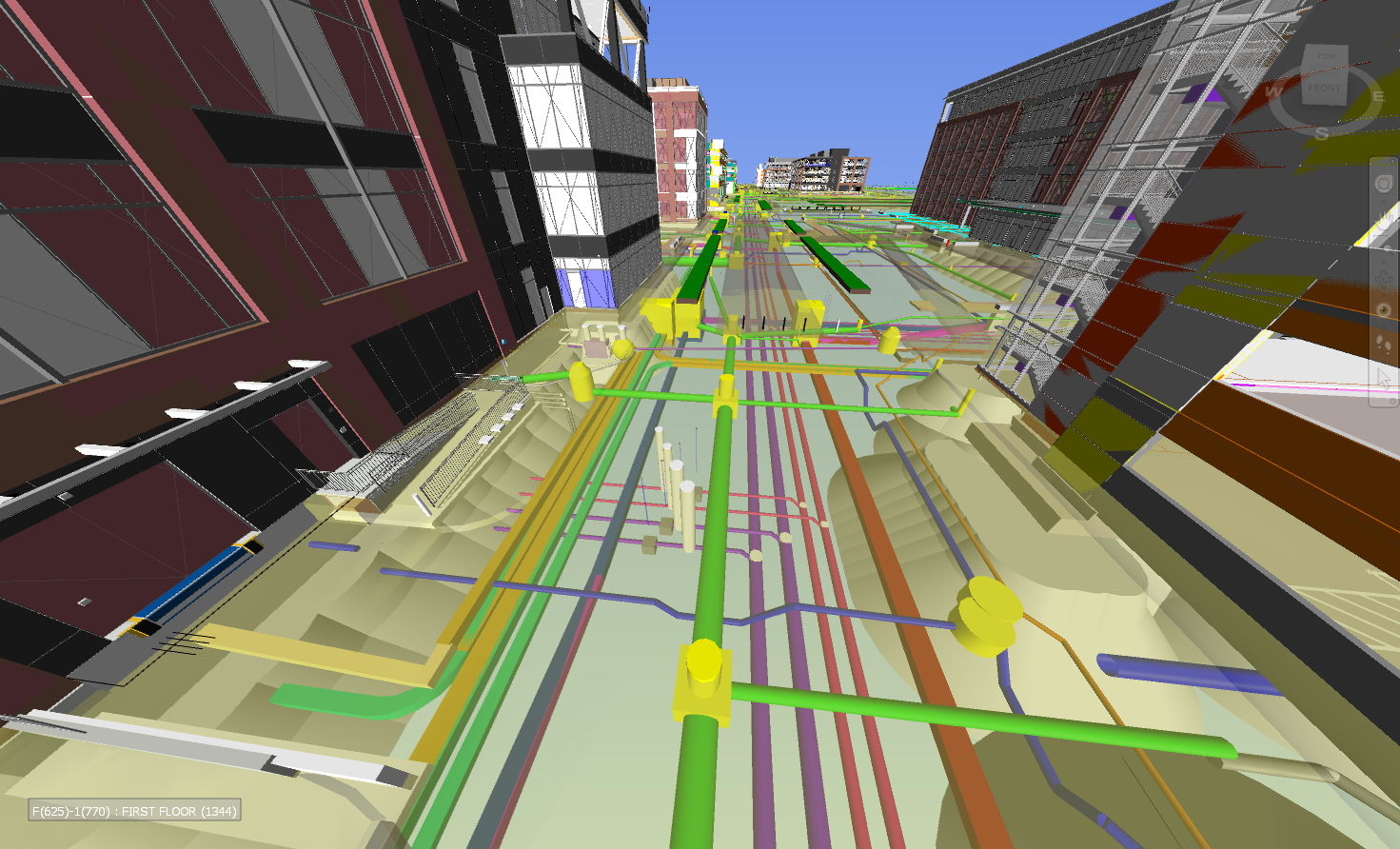 The federated model was used for the campus to see what was occurring within the design as well as to visually see what the layout may look like once construction is completed. For example, it allowed users to visualize a tunnel crossing under a street from the perspective as if the user were viewing the tunnel onsite in real-time. The federate model includes utilities, grading contours, roads, sidewalks, buildings, building foundations, landscape, bridges, tunnels, ramps, retaining walls, and anything else that can be envisioned on the campus. Users have the ability to zoom in and out of the various elements of the model in order to measure clearances between the various utilities.

Any discrepancies between the different project teams’ Civil 3D models were identified and discussed during weekly meetings. In addition, the contractor would inform the design team of the construction sequencing during these meetings to focus on any utilities that would be installed in the near future. The 3D model was updated faster than the drawings, which also made the campus unique because the contractor was building off the model instead of the drawings.

The ability to review the utilities in the software platforms used for the campus resulted in faster conflict identification and resolution. The design teams and the contractor were able to understand the issues immediately by seeing all of them in 3D or in real-time. Identifying the issues early saved time and money on reconstruction efforts.

Due to the abundance of moving parts, site components, different phases of design, and the number of utilities for the campus, it would have been impossible not to collaborate—either with the bevy of software programs or the regular building team meetings—to provide a successful design.