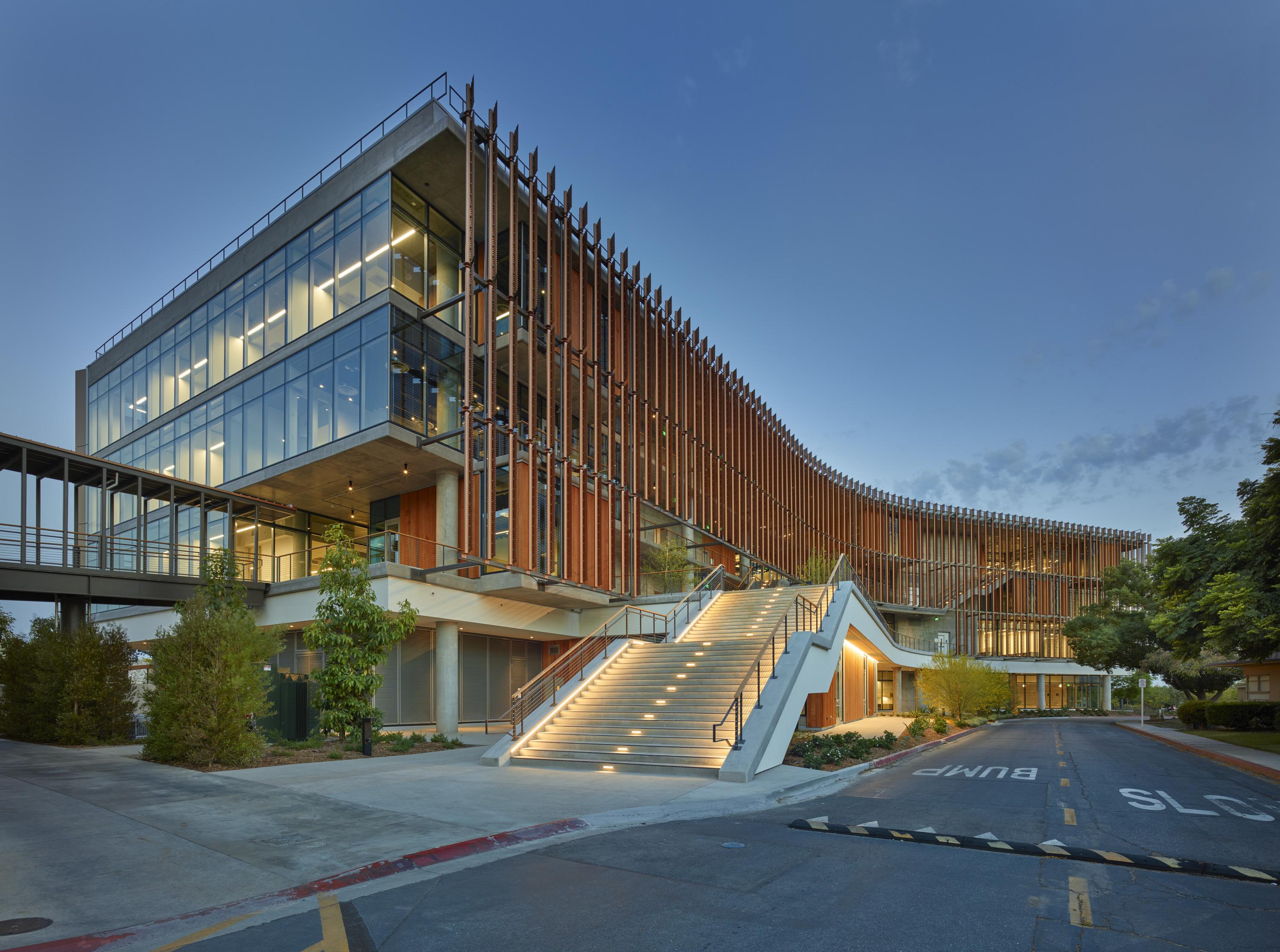 For an administrative building, the term “pushing the envelope” has taken on a new meaning. For the City of Hope administrative office building, engineering firm Walter P Moore transformed the building envelope into a crescent-shaped structure that features exterior walkways, cascading stairs, less insulation, and a steel/mesh sunshade. The result is golden—inside and out.

City of Hope in Duarte, California is a comprehensive cancer center focusing on advancing research and treatment protocols. In an effort to serve more patients and increase research capacity, City of Hope is transforming its main campus over the next 20 years.

A cornerstone of City of Hope’s expansion is its administrative office building, which consolidates staff from several locations throughout the 110-acre main campus. The four-story, 108,000-square-foot building is limited to office and administrative functions that support the medical center.

On the eastern edge of the Duarte campus, a limited amount of real estate was available for the new administrative building. This resulted in a crescent-shape that tapers down in size on the south side to fit the site.

The inside structural curve results in a facade that faces the entire campus and features cast-in-place exterior walkways with cascading stairs, and a steel/aluminum mesh sunshade. It also has an open-air office, administrative, and collaboration spaces as well as meeting rooms along with private and executive offices.

Walter P Moore provided structural and enclosure engineering for the project as well as a Whole Building Life Cycle Assessment (WBLCA), contributing to a structure that has been designated LEED Gold v4. “Walter P Moore’s integrated team was able to work together to leverage our expertise to deliver a cohesive architecturally aesthetic solution,” says Daniel Traub, principal and senior project manager for Walter P Moore’s Structural Group in Los Angeles.

The WBLCA allowed the design team to track and optimize a range of environmental impacts associated with extracting, harvesting, and installing project materials. It also provided the design team with the ability to make decisions resulting in significant contributions to the initial impacts—including embodied carbon—and allowed the team to minimize upfront emissions rather than simply offsetting them.

The large amount of concrete used in the administrative building meant the most meaningful reductions in embodied carbon could be made by modifying the concrete mix design because cement typically accounts for 95% of embodied carbon in concrete.

Walter P Moore worked closely with the concrete supplier to develop new mixes that would require far less traditional cement content by using higher quality aggregate than those available locally. Analysis showed that, including the carbon emissions required to ship the aggregate to southern California from British Columbia, using a superior aggregate resulted in a 44% reduction in the amount of CO2 emitted by the concrete—2.8 million pounds for the project as a whole.

Additionally, the administration building includes PV panels installed on the roof. The panels produce nearly 40% of the energy required to run the facility, which results in significant savings throughout the life of the building. “By being engaged early in the design process, the design team was able to implement changes that contributed to reaching the sustainable goals without having a significant impact on the structural performance,” Traub says. 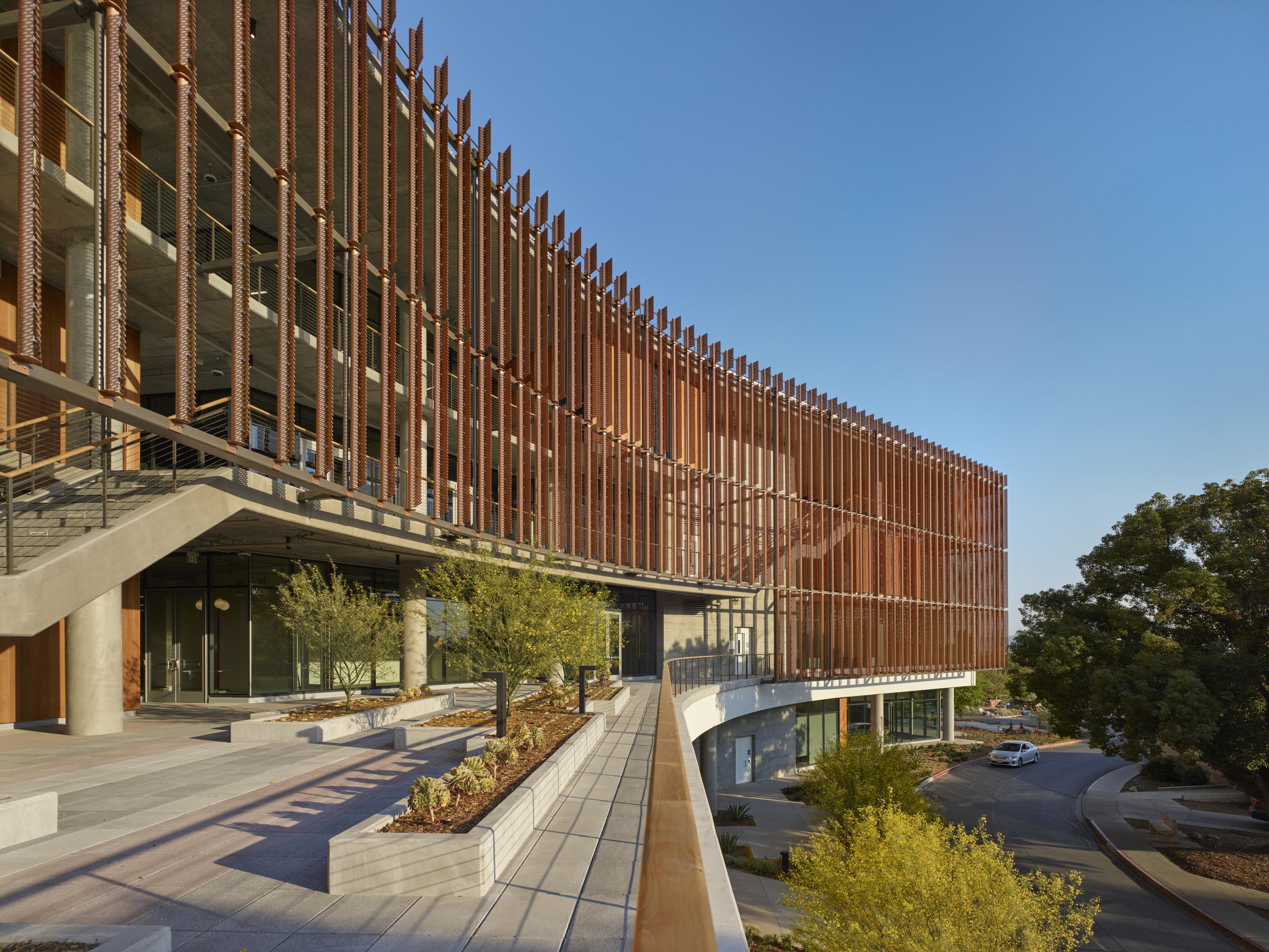 The stairs, walkways, and sunshade appear as if they floated along the front facade. To achieve this look, the vertical supports were designed to be as discreet as possible. Because the stairs and walkways are exposed, a portion of the stairs is a continuous constant depth facade that extends along the whole length of the building from the stairs to the floors. Furthermore, the stairs were designed to have supports that cantilevered from the main structure to minimize required columns.

It is common to create a column-free exterior by cantilevering the exterior edge of each floor off columns that are deeper in the structure. However, for the administrative building the project architect, Gensler, wanted the cantilevered, exterior walkways to flow seamlessly into cantilevered stairs, which is less common. Given the shape of the risers and treads, Gensler and Walter P Moore created a design that maintains a consistent silhouette across the entire western face of the building.

The sunshade is mounted to the floating walkways and stairs, providing the building’s stunning architectural feature. Walter P Moore’s enclosure specialists worked with Gensler to define the precise geometry and angle of each vertical fin for maximum shading. Each element of the sunshade was designed so it was easy to fabricate and install while maintaining the design intent.

As a result, so much protection from sun was provided that the amount of insulation on the western face of the building was dramatically reduced. This decreased the environmental impact of the initial interior finishes and will provide reductions throughout the operational life of the building.

“Walter P Moore was a pillar of the design team, successfully answering the call to innovate and deliver a unique project,” says Brian Fraumeni, associate and designer at Gensler. “The LEED and overall sustainability goals were championed by Dirk Kestner and his team in the Austin office. This was a testament to the strength of the Walter P Moore firm, delivering expertise on multiple disciplines, seamlessly from multiple hubs.”

The administrative building serves as the signature building for City of Hope’s Duarte campus and will drive the appearance of new construction throughout their 20-year master plan.