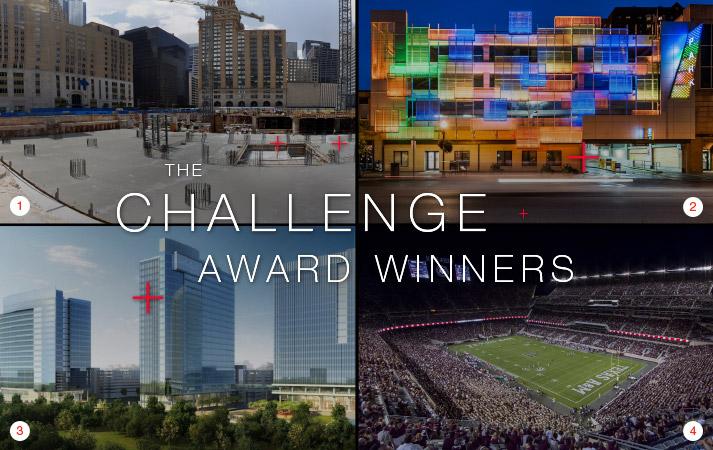 Walter P Moore congratulates our third round of Challenge Award winners! Started this year, the Challenge Awards were established internally and are held quarterly to recognize teams and/or individuals for outstanding performance in demonstrating some or all of the 5 Coordinates that define our “Driven by the Challenge” culture.

And the winners are...

When Blaine started at Walter P Moore over two years ago, his first assigned project was Capitol Tower, the new 35-story office tower in downtown Houston that will provide 750,000 rentable square feet of Class A office space. The entire project includes 11 parking levels, a monumental lobby gathering space with retail, and multi-level connections to downtown Houston’s tunnel system on all four sides of the city block. Walter P Moore was selected by Gensler (architect) and Skanska (developer and general contractor) to provide Structural, Civil, Parking, Traffic, and Sustainability Consulting. Skanska elected to pursue LEED® v4, which is the newest and to date most aggressive version of the LEED rating system.

Blaine played a large role in designing the structural components for the project and was especially intrigued with designing the mat foundation under the tower portion of the building. Up until the official mat pour, Blaine attended the site twice weekly to observe progress, and after being amazed by the panoramic shots he’d taken at these visits, it occurred to him that a time-lapse video might be the perfect vehicle for showcasing the enormous size and progression of the mat pour.

With permission from Gensler, who was hosting a “pour celebration” at their office on August 22, Blaine set up his camera and tested vantage points of the site several days before the actual pour. He conducted extensive research on the best methods for shooting the time-lapse. His initial thought was to get a GoPro camera that has automated functions for capturing a time-lapse, but after further research, he concluded that his Canon Rebel T4i DSLR would be perfect with the right settings — manual focus, manual aperture, and a varying shutter speed to capture the maximum amount of light once the sun went down. Another very important setting was the auto white balance feature, which had to be put into manual mode in order to avoid “flickering” of the time-lapse.

Another important consideration for the time-lapse was the number of seconds between each still image. For example, to capture human motions, a photographer would use a 1-2 second interval. To capture outdoor scenes like the mat pour, a 15-second interval was chosen to give the perfect effect for a 30-frames-per-second time-lapse video. To achieve this interval, Blaine purchased an 'intervalometer' (no, we didn’t make that up) that connected to the DSLR and controlled the interval setting remotely. Blaine also purchased a wide-angle attachment for the DSLR to capture the surrounding skyscrapers and achieve a wide, cinematic effect. Fortunately, Gensler is located on the 6th floor of Pennzoil Place, which is directly across from Capitol Tower and offered the perfect vantage point.

The entire time-lapse footage used to create the video ended up being compiled from 7,440 still images over a 24-hour period. If even one slight movement of the camera had occurred, the video would likely have been ruined. So although the party at Gensler's office during the pour generated a lot of interest from the guests, the process was somewhat nerve-wracking for Blaine, but he took it all in stride, even casting a live Periscope during portions of the mat pour.

Located between two government buildings on a main intersection in Lexington, Kentucky, the Helix-on-Main is a 1970s parking garage with a helix ramp that was renovated and re-imaged to better serve its community. Typical questions raised at City Council meetings for many years were: Should this structure be demolished or repaired? If repaired, what would be the useful service life of the repaired structure? Since demolishing the garage would create a parking shortage and the City was unsure of the long-term fate of the adjoining buildings, we advised the owner to extend the life of the structure with repairs. The Lexington Parking Authority saw this as an opportunity to rebrand the facility and make it an asset not just for the patrons, but for the City.

In essence, this project is the story of a garage in a historic neighborhood that rose from the ruins to serve its community once again. Its incredible rebirth has urged the naysayers — who were all too ready with its obituary — to rethink the role of a garage in their neighborhood. The selected exterior façade enhancements — including waterproofing coatings, a stainless steel panel system, and programmable LED lights — transformed the garage into a dynamic element and positive contributor to the downtown architectural fabric. This exemplary project has inspired other public entities to view parking garages as artistic community assets that can potentially revitalize their business districts to benefit future generations.

Trammell Crow Company is developing three high-rise office towers at the southwest corner of IH 10 and North Eldridge Parkway. The three sites are being developed in three phases. Each site includes a 600,000-sf office tower and 600,000-sf parking garage.

A big concern on this project was an existing gas pipeline easement, which had very specific rules on what could be built in and around it. Walter P Moore was able to work with the pipeline owners directly and secure a right-to-encroach agreement that was paramount to the development of the site.

Each site drains into a retention pond along the east end of the respective site. The ponds are equalized with each other through a network of pipes. Creating a combined pond to serve all three buildings reduced the number of outfalls to the City system and allowed shared detention. This increased the area of building development and site amenities. This was very important to the developer to maximize leasing potential.

The site has four driveways onto public roadways including access to IH 10 E. The Walter P Moore Traffic Group provided the recommendation, validation, and design of a traffic signal at one of the driveways and assisted in site circulation for the entire site.

Impact to the Community

The site is adjacent to Bridgepoint Bible Church. Walter P Moore was able to facilitate an amiable relationship between the developer and church by coordinating the development of an access driveway across the church’s property that benefits both the church and development.

Walter P Moore delivers the largest collegiate sports project in history in record time through an integrated engineering approach and a focus on the preservation of the history and tradition of a legendary home field.

Texas A&M University’s historic Kyle Field, the legendary “Home of the 12th Man,” has been the home of Aggie football since 1905 and has experienced five major expansions over the last 100 years. This most recent improvement project, concluded in September of 2015, represents the most extensive redevelopment of a collegiate athletic facility in history and serves as a benchmark for future stadium improvement projects at universities across the country.

Expanded to 102,733 seats, Kyle Field is now the largest stadium in the powerful Southeastern Conference and — perhaps more importantly to the Aggies — the largest stadium in Texas. Construction of the $485 million project was completed in only two nine-month off-seasons, allowing every Aggie home game to be played on sacred ground on the campus of Texas A&M and in the heart of College Station, Texas.

The first phase of construction, completed in September of 2014, renovated and expanded the east side of the stadium, introduced an immense south end zone seating structure and vertical circulation towers, and unveiled a 7,700-sf LED scoreboard, the largest in all of college sports. The recently-completed second phase of construction replaced the entire west side of the stadium with one of the most complex and structurally demanding grandstands ever built and incorporates a completely redesigned façade that unites old, new and renovated sections of the stadium under a consistent, iconic, and timeless architectural theme.

Rather than abandon their stadium for another site or demolish it to completely rebuild, Texas A&M decided to preserve that history by commissioning an unprecedented redevelopment of their home field that redefines what is possible in sports facility enhancement. The Kyle Field Redevelopment respects the tradition-rich history of Texas A&M while providing the extremely rare opportunity to showcase true engineering innovation weekly to more than 100,000 admiring fans and a national television audience.

See the ONE BILLION-pixel panoramic image of the seating bowl during the opening game at Kyle Field and the videographic created by Populous for the grand re-opening.

About the Awards
Submissions are open to all business units and corporate groups within Walter P Moore, with up to four teams/individuals awarded each quarter. Each award has both a cash and a charity component, with the charity being chosen by the winning team. To date, charity organizations have included United Way, Engineers Without Borders, Habitat for Humanity, local food banks, and local ACE Mentoring Programs. However, each group is allowed to choose their own charity organization recipient.