What began as a tropical storm off the west coast of Africa and ended as a Category 4 hurricane settling over southeast Texas, Hurricane Harvey set records in every storm category unloading 33 trillion gallons of rain, devastating many areas along Texas' Gulf Coast. In Harris County alone, the amount of rainfall that typically occurs over the course of a year, fell over the course of four days shutting down businesses, flooding neighborhoods, and displacing thousands of families.

The catastrophic storm dropped unprecedented amounts of rain — overwhelming a section of Southeast Texas the size of New Jersey — causing sinkholes and other safety concerns that needed to be urgently addressed as a result of the flooding. Walter P Moore experts answered the need for diagnostics, water resources, and civil engineering response teams and were actively working with local and federal government agencies before Harvey even made landfall. When the storm arrived, the Walter P Moore team provided boots on the ground reconnaissance of flooded structures to identify potential life safety conditions. “The onsite reviews provided critical guidance to first responders and remediation crews, who were standing by to reoccupy the structures for a vigorous cleanup effort,” adds Mark Williams, Managing Director for Diagnostics Houston.

On Sunday, August 27 around 2 p.m., Andy Yung, Chief Hydrologist at Walter P Moore, received a call from Dr. Nick Fang at University of Texas at Arlington (UTA) who was working in tandem with U.S. Army Corps of Engineers’ (USACE) Jerry Cotter and the Texas Department of Emergency Management (TDEM). Walter P Moore was part of a team that forecasted flooding on seven major river systems in southeast Texas along with as many bayous and creeks as possible in the Houston metro area. “They were looking to rapidly map potential inundation areas across various parts of Harris County,” explains Yung. “They needed to figure out where they would be able to deploy personnel and organize emergency response.”

With the USACE directly managing forecast efforts on Buffalo Bayou and Rice University/UTA performing analysis on Brays Bayou, Yung assembled a Walter P Moore team immediately and analyzed seven additional stream systems within Harris County: Clear Creek, White Oak Bayou, Hunting Bayou, Greens Bayou, Cypress Creek, Willow Creek, and Spring Creek. Because the storm was continually evolving, the team updated their inundation maps daily based on measured rain to-date supplied by Dr. Fang. “Several employees were unable to be in the office due to mobility issues, so many members of our staff were working from home during this time with a few of them surrounded by water themselves,” adds Yung. As in most Greater Houston areas during the event, internet and electricity were not always guaranteed, but the Walter P Moore team was determined to keep the USACE and TDEM up-to-date on potential risks.

Working side-by-side with the Harris County Flood Control District (HCFCD) who was actively trying to convey information to the public, the team began to evaluate how much of Harris County was underwater at any given point. “We ran rough calculations and plotted a map, leading us to the conclusion that 70% of the county was flooded,” says Yung. 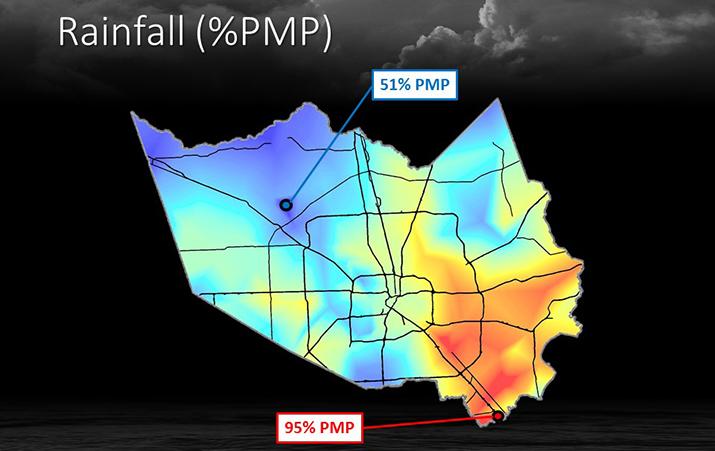 The next step was pinpointing just how bad Harvey really was. “Jeff Lindner of the HCFCD was asking, ‘How big is this?’” Yung recalls. “When measuring events of this nature, we must realize that we have a limited period-of-record to extrapolate from, so our answers had to be viewed through this lens.” Walter P Moore engineers developed an analysis to estimate the return period from observed rainfall produced by Harvey. This resulted in a staggering statistic — Harvey was approximated as a 50,000-year storm event over a four-day period in the vicinity of Clear Creek and Interstate 45.

“This statistic seemed rather speculative given that we have less than 100 years of observed rainfall data to work with; so, to put this event in perspective, we calculated the PMP, Probable Maximum Precipitation, which in layman’s terms is theoretically the maximum amount of rainfall that the atmosphere can produce,” explains Salazar, Managing Director for Water Resources Engineering. “We found that at Clear Creek and Interstate 45, the 50,000-year rainfall translated to about 95% of the PMP for a four-day storm. Across Harris County, the number was on average about 80% of the PMP.”

In an effort to assist the HCFCD in gathering data post-flood, Walter P Moore teamed up with spotters and surveyors to collect high water marks across Harris County. “This event was so widespread that HCFCD ended up identifying 588 marks, surpassing the 496 collected after Hurricane Ike,” says Yung. “To put it in rudimentary terms, Houston flooded because it rained 50 inches in four days — there is nothing that could’ve been done to prevent that. Now we are collecting data and learning from this storm so that we can better understand the risk posed by a storm like Harvey, and can help put protective measures in place.”

For the Diagnostics and Civil teams, the most immediate response was required at City Hall and the connecting Annex Building. “It was certainly helpful that our offices are located downtown and we were able to respond quickly,” says Williams. “Both buildings flooded to different degrees and we were called in not only to assess the situation, but to address safety issues and if the structures were compromised.”

The Walter P Moore team assisted with the placement of commercial-grade electrical and mechanical response equipment as well as identifying areas where emergency vehicles could park and enter safely. In addition, they also responded to mirrored concerns in Houston’s Theatre District. “We were in tandem with the ‘first responders,’ determining if flooding had impacted the structure and safety concerns of the response crew,” explains Williams.

Response was only the first phase. Houston quickly moved to the repair phase in a determined effort to restore the city to working order. “Houston is a unique city in that we can pick ourselves up no matter what’s been thrown at us,” adds Charlie Penland, Managing Principal. “No matter how big the blow is, we’re not going to wait for someone else to come do it for us.” 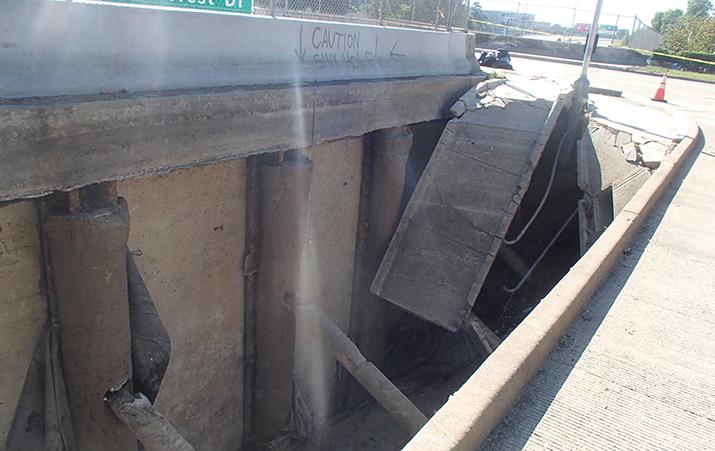 One of the most notable road obstructions during Harvey was the Beltway 8 sinkhole between Buffalo Bayou and Memorial Drive. Water went underneath the toll road and pushed the pavement up about 12 to 16 inches. “The sinkhole developed on the backside of the retaining wall, potentially compromising the tie-back retention system,” explains Williams. “The County estimated that 70 million gallons of water poured into the area.”

The sinkhole also engulfed the three-lane frontage road making access challenging. While the rain continued to hammer the city, Walter P Moore gathered a response team and evaluated what needed to be done to facilitate repairs — and quickly. “We had to get creative to access the site since main roadways were still impassable,” recalls Williams. “But still, we were able to be on site, design a temporary wall stabilization system, and take steps to repair the roadway once the flood waters subsided.” One hundred and twenty braces were used to provide support to a substantial length of wall while crews worked to replace soil lost in the sinkhole. Partnering with Harris County Toll Road Authority and TxDot, the team was able to repair the damage in four days.

The storm that formed on August 17, 2017 is still very much a part of Houston. “Many asset holders have realized first-hand the full impact of flooding or threat of future flooding,” says Williams. “Walter P Moore is already engaged in flood vulnerability studies and wide-scale design and implementation of flood mitigation systems before the next major storm hits.”

Penland, along with his team, were involved in several “think tank” discussions answering the questions: What did we learn? What do we need to communicate as a result of this? And, how can this event spark better thinking on how we go about planning and designing drainage systems and developments?

“It is our responsibility to help people understand the risks,” says Penland. “Each ‘property’ has a unique flood risk based on a multitude of flooding sources.” Some items that should be considered are: infrastructure, rainfall risk, sheet flow risk, storm water detention, riverine flood risk, and being in a levee-protected area. “At the end of the day, the goal is that everyone will be more educated, and more informed, so that we can choose the best path forward,” he adds. 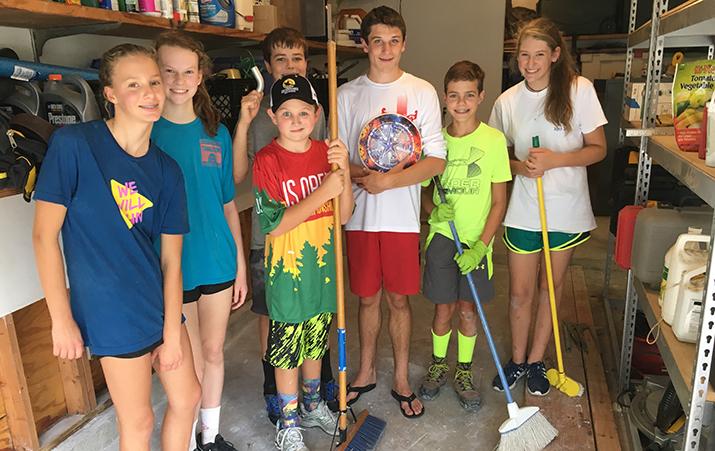 Any time a catastrophic event takes place, the natural reaction is to protect oneself and their family. But after that — after the rain stops and the immediate threat has moved on — Houston witnessed people coming from all areas to pitch in, to help their neighbors build back stronger what Harvey tried to destroy. “There’s an expiration date to investing in protection from a storm like this,” reminds Penland. “Each storm is a different lesson and we need to make sure that we are learning from all of them. Take advantage of the opportunity this storm brought about — the opportunity to change things.”