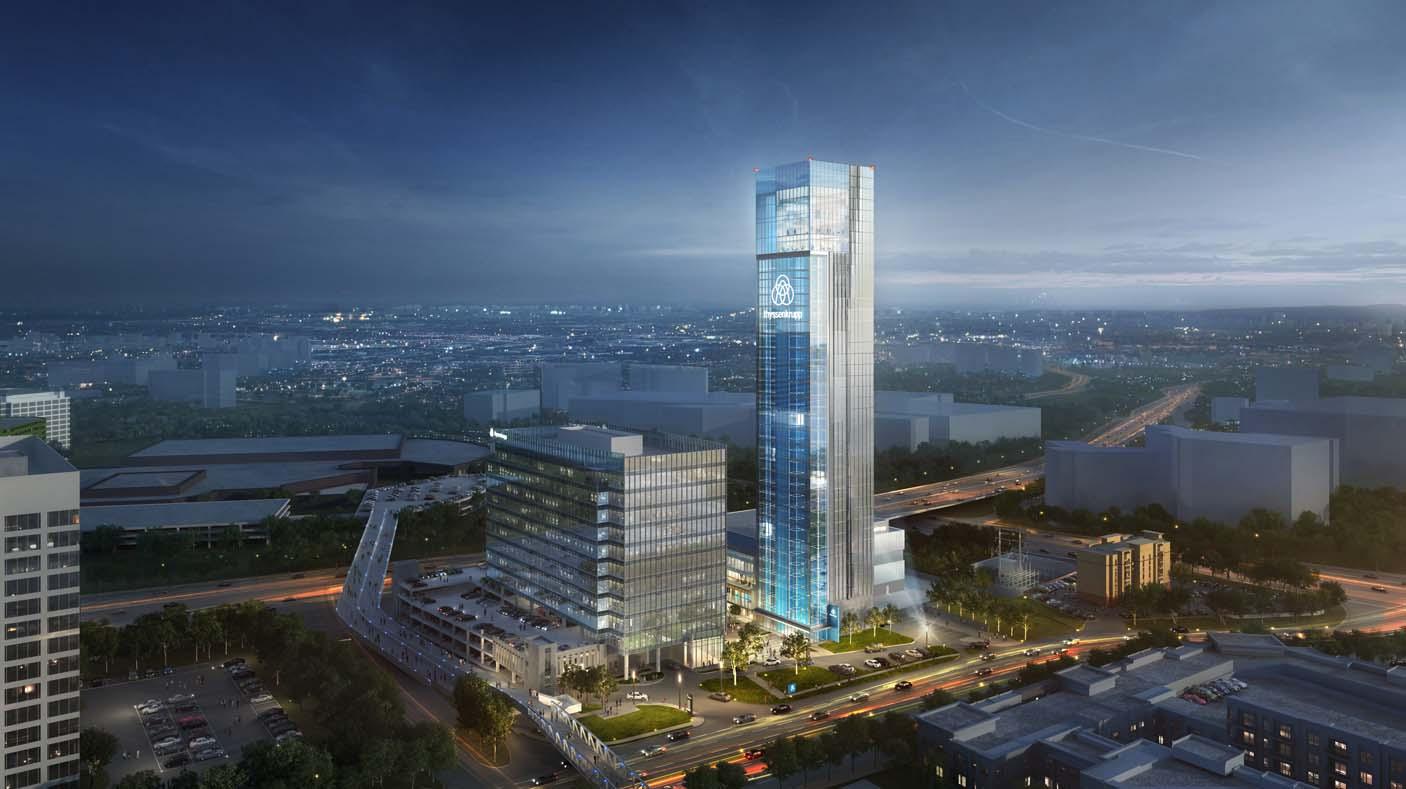 The striking new tower casting its shadow over The Battery and Truist Park in Cobb County, Georgia, will soon be home to thyssenkrupp Elevator, one of the largest elevator manufacturers and service providers in the world.  The Innovation & Qualification Center (IQC) of thyssenkrupp Elevator’s new North American headquarters includes a research and development facility anchored by a state-of-the-art 420-foot-tall elevator test tower, the tallest of its kind in North America.  Construction on the Innovation & Qualification Center (IQC) is scheduled for completion in 2021.

The IQC includes cutting-edge elevator technologies and intricate enclosure design. The tower is equipped for the first U.S. installation of MULTI elevators, which can move both vertically and horizontally to provide faster service and reduce the footprint of the elevator core within a building. Optimized by Walter P Moore’s Enclosure team, the atrium curtain wall around the MULTI, panoramic, and TWIN elevators balanced climatic factors and ASME code requirements. 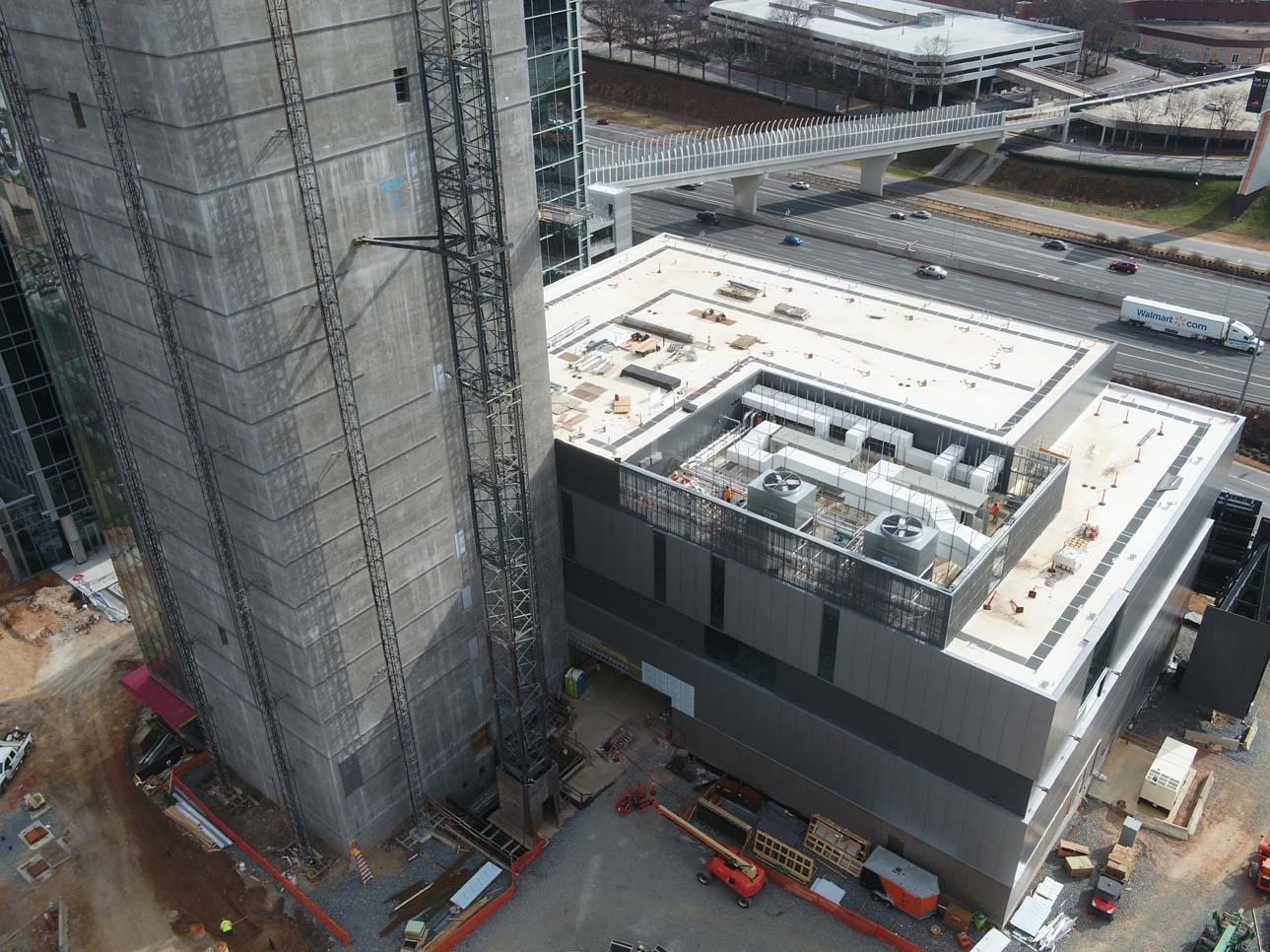 Although insulated glass units are commonly used on enclosed structures to provide high level thermal and solar performance, laminated glass was required by ASME code in this case since the atrium curtain wall serves as a shaft wall for the panoramic and TWIN elevators. Walter P Moore, Gensler (architect), Harmon (curtain wall contractor), and Brasfield & Gorrie (construction manager) participated in a design-assist process to develop an approach that would meet ASME code and fare well in Georgia’s warm, humid environment with occasional ice-forming winter days. Ultimately, a unitized aluminum curtain wall system infilled with single panes of laminated glass was employed to optimize glazing weight, cost, and material for the semi-conditioned atrium space.

The exterior concrete walls of the tower are clad with perforated metal panels, articulated at various angles. The panels were factory mounted on aluminum frames and field-installed on rails mounted on the concrete wall. Walter P Moore and Gensler worked with Southeastern Architectural Systems (metal panel contractor) and Brasfield & Gorrie to develop a system and installation sequence that preserved the design intent while achieving the aggressive installation sequence and minimizing ice build-up on the perforated metal surface that protrudes from the tower concrete walls.

The 32-foot full-size tower pit was blasted into the bedrock with uplift at the tower corners resisted by means of rock anchors extending 25 feet into the bedrock below. Close coordination with Terracon (geotechnical engineer) and Brasfield & Gorrie, regarding the type and sequencing of backfill around the pit walls, allowed 18-inch concrete wall thickness for all tower elevations, including the 32-foot pit. Maintaining a uniform thickness of the slip formed walls was estimated to save two weeks of construction time by avoiding the need to reset the forms. 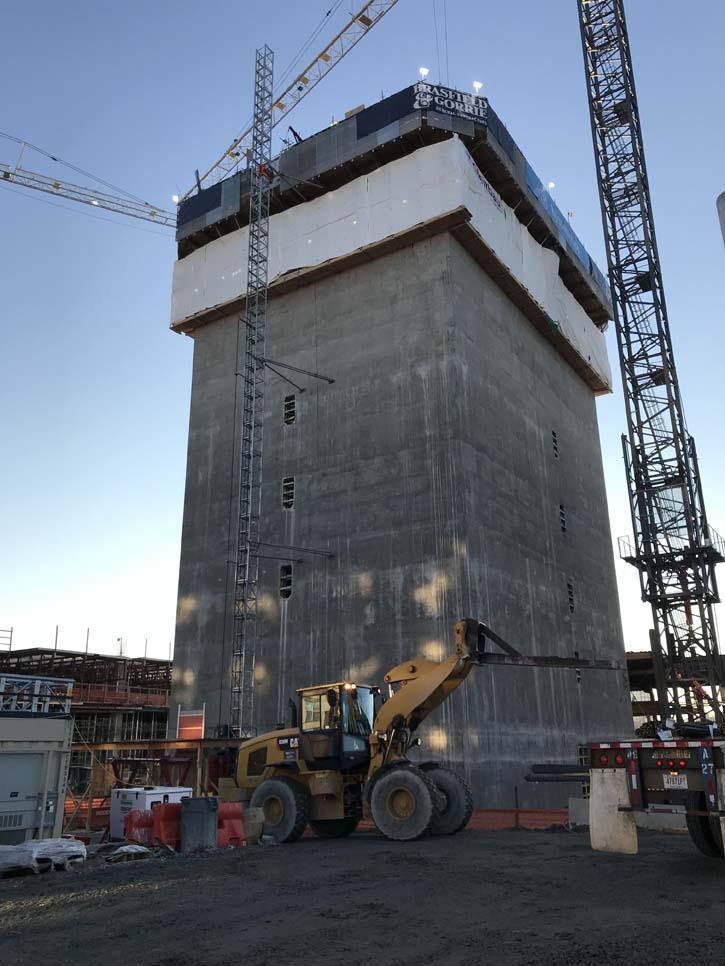 Future flexibility of the structure was critical to allow for the continued evolution of thyssenkrupp Elevator’s technology. Walter P Moore developed a "futureproofed" method for supporting the tower’s nine test elevators involving a network of steel tube framing in-board of the slab edges. Providing continuous tube framing all around the elevator shafts at a maximum spacing of 7’ 0” on center vertically allows for the installation of a variety of elevator types in each shaft. Blockout sizes and locations for elevator use through the 19-inch thick full-floor machine slab were carefully coordinated with thyssenkrupp Elevator to allow for future adaptability.

The six-story low rise structure adjacent to the test tower contains laboratory space, conference rooms, showroom, exterior terrace balcony, and a rooftop mechanical yard. This usage of space and the architectural aesthetic of the balcony resulted in large, varied floor openings and 28 transfer columns at the low-rise structure.

Thyssenkrupp elevator aims to be climate neutral and has set ambitious climate targets for 2030. Walter P Moore performed a Whole Building Lifecycle Assessment (WBCLA) as part of the structural and enclosure design to identify strategies to reduce embodied carbon of the building. More than 10% reduction in embodied carbon of the core and shell was achieved through design optimization and the use of low carbon concrete.