Embodied Carbon in Building Enclosures: Why It Matters

Embodied Carbon in Building Enclosures: Why It Matters 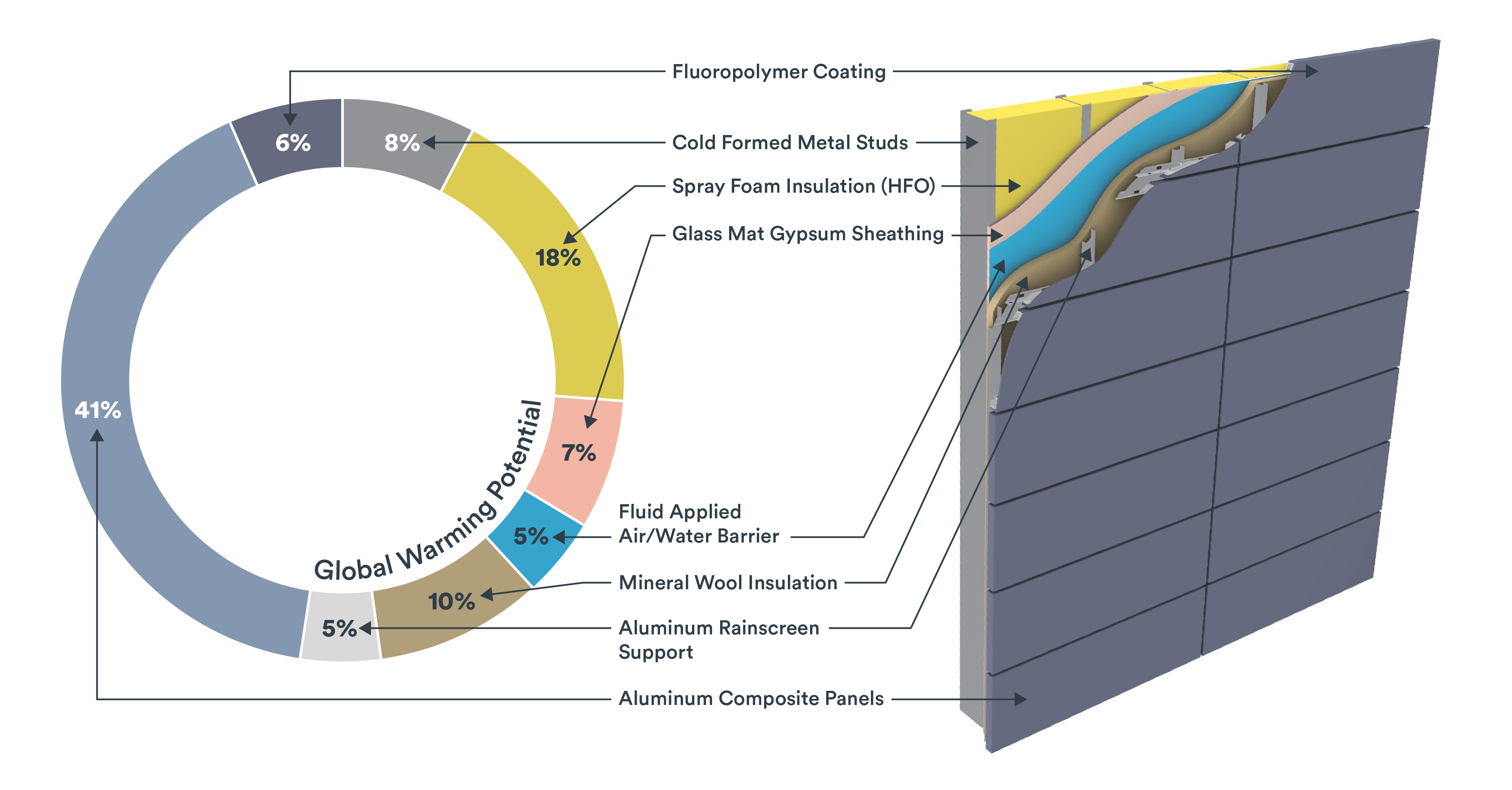 Reducing the carbon emissions of the building sector has never been more urgent. According to the UN Global Alliance for Building and Construction’s 2020 Global Status Report for Buildings and Construction, buildings were responsible for 38% of global emissions in 2019. Approximately a quarter of that figure can be attributed to embodied carbon—or the emissions associated with the manufacture of building materials.

To achieve the goal of net zero building emissions by 2050, we need to attack building-related emissions from every angle. Embodied emissions happen upfront, at the beginning of a building’s life, while operational emissions are spread out over the building’s entire lifespan, making embodied carbon critical to meeting near term emission reduction goals. As buildings become more operationally efficient, embodied carbon enters the spotlight as a metric to reduce. We need to reduce embodied carbon in every project, every time. High profile green projects with big sustainability goals are leading the way, but we need to incorporate carbon reduction into our day-to-day workflows for all projects.

In his iconic book How Buildings Learn, author Stewart Brand presents a time-layered perspective on buildings, suggesting they are made up of layers that change on different timescales, from site and structure (most permanent), to skin, services, space plan, and “stuff”, each of which change more rapidly than the preceding layer. Buildings learn and change over time as the patterns of the cities they are part of grow and evolve, and new facades give old buildings new life.

As my structural engineering colleagues work within the SE 2050 framework to design low carbon, resilient structures that remain functional throughout the course of the building's life, when we design building skins we are working on a different timescale due to the limited lifespan of enclosure systems and materials. This more rapid rate of replacement amplifies the importance of reducing embodied carbon in enclosures.

In our enclosure practice at Walter P Moore, whether we are working on reskinning an existing building or designing the skin of a completely new building, we go through an “optioneering” process where we rapidly generate and assess an array of different enclosure system possibilities that all meet the project’s performance requirements. Assessing embodied carbon in the early stages of enclosure design is crucial because the skin is where metrics around operational and embodied carbon meet. Improving a building’s energy performance may mean adding more material—and more embodied carbon—to the enclosure, but enclosure design is driven by a variety of parameters, including thermal and structural performance, aesthetics, cost, constructability, and embodied carbon. More material does not always result in better energy performance, and our goal should be achieving high performance enclosures that lower operational energy and carbon use while keeping embodied carbon at a minimum.

When thinking about embodied carbon, we can assess the enclosure at a variety of scales. At the scale of systems and materials, how do our choices of cladding material, insulation, and secondary structure impact embodied carbon? What are the embodied carbon implications of the system choices when they are applied at the scale of a whole building? How do the massing of the building and the specific geometry of the facade drive quantities of enclosure materials?

The earlier we start assessing embodied carbon, the greater the impact we can have, without compromising on the architect’s design intent. With project schedules becoming ever more compressed, it is critical to identify hotspots and lock in low-carbon design choices at the earliest stages of design.

In my contribution to Walter P Moore’s stewardship report Embodied Carbon, A Clearer View of Carbon Emissions, I present a simple case study highlighting embodied carbon hotspots in four enclosure assembly options to illustrate how Life Cycle Assessment can be used to make more carbon smart enclosure choices. In the report, you will find a variety of perspectives on embodied carbon in buildings and how we can move forward toward a net zero carbon future.