Target Field has been acclaimed as the most environmentally responsible major league ballpark, earning LEED Silver Certification.  As an extension of the downtown streetscape, the project encourages the use of commuter rail and pedestrian arrivals rather than vehicular modes, and has leveraged the entire existing infrastructure surrounding the site.  One in five fans uses alternative transportation modes to attend games, substantially reducing greenhouse gas emissions.  However, as excited fans enjoyed Opening Day, most had no idea that the park overlays a rail line, two commuter lines, an active interstate highway, and a main stormwater outfall for downtown Minneapolis.  The creation of Major League Baseball’s most environmentally-friendly ballpark on a site called “too small and virtually unbuildable” challenged Walter P Moore to demonstrate engineering excellence at every step of the design and construction process. 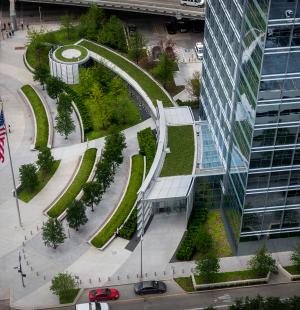